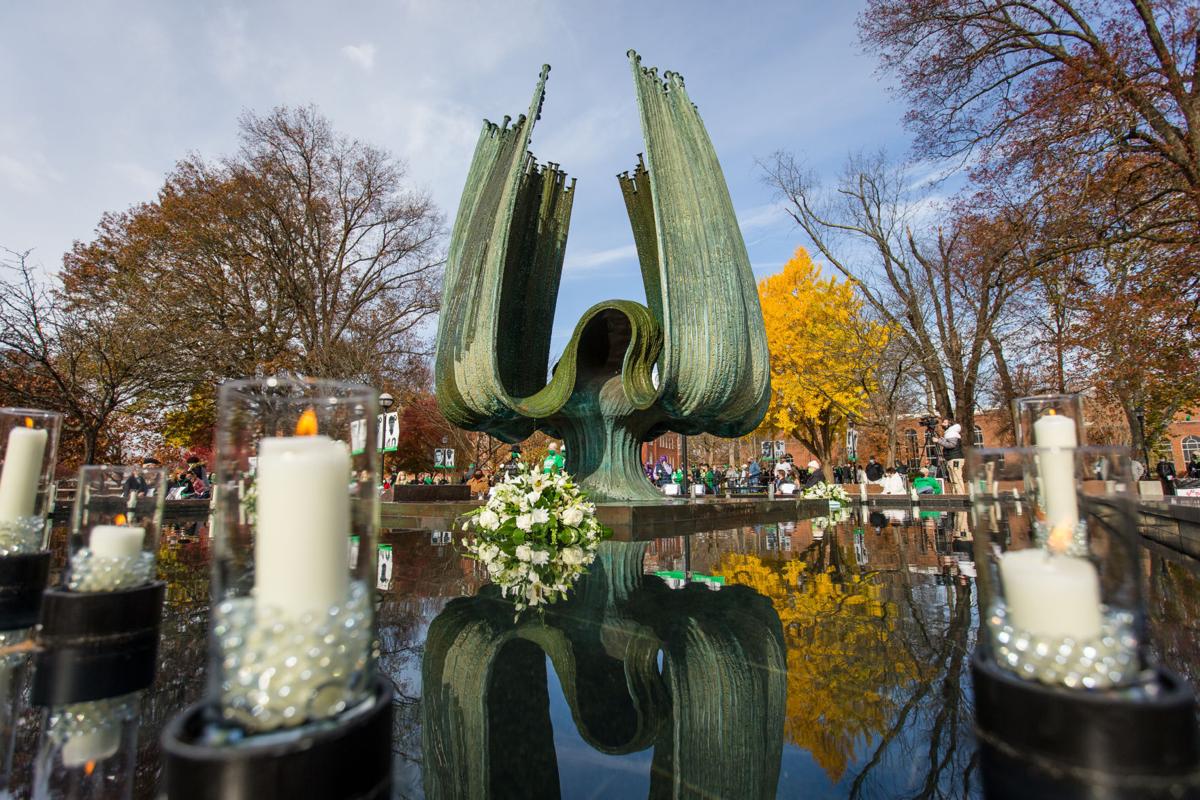 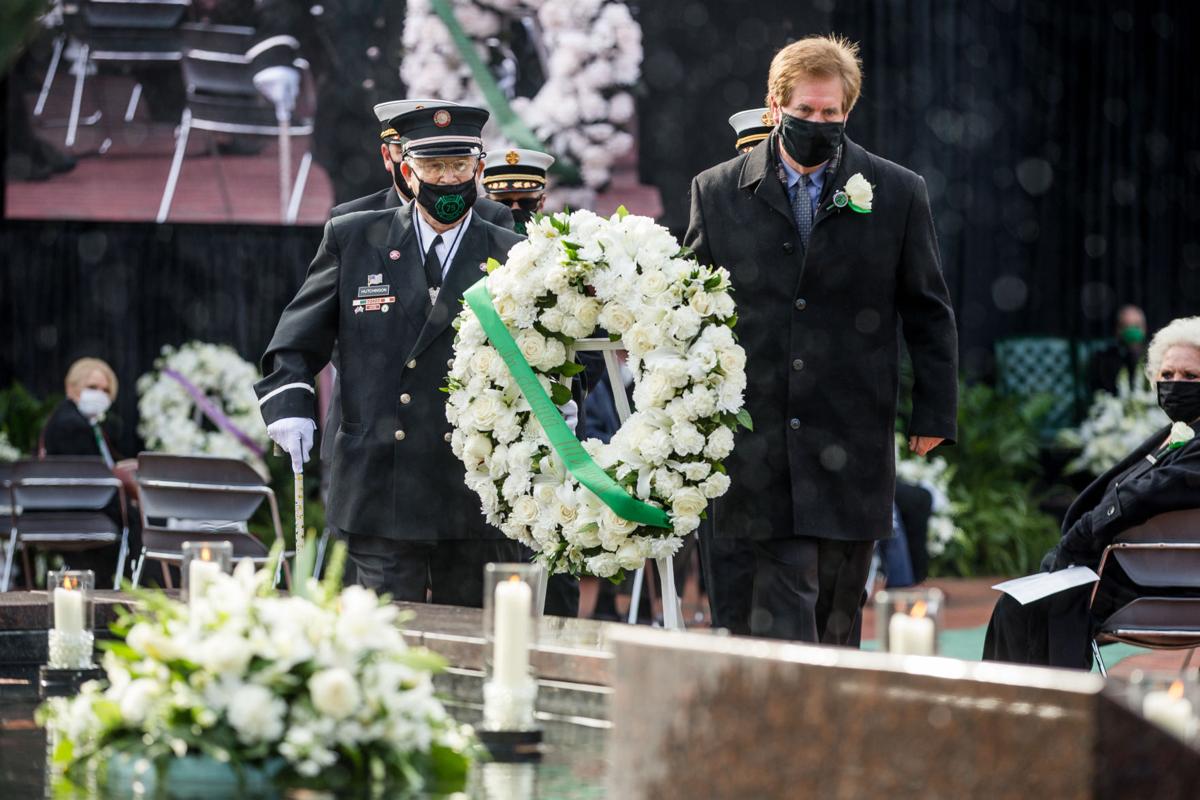 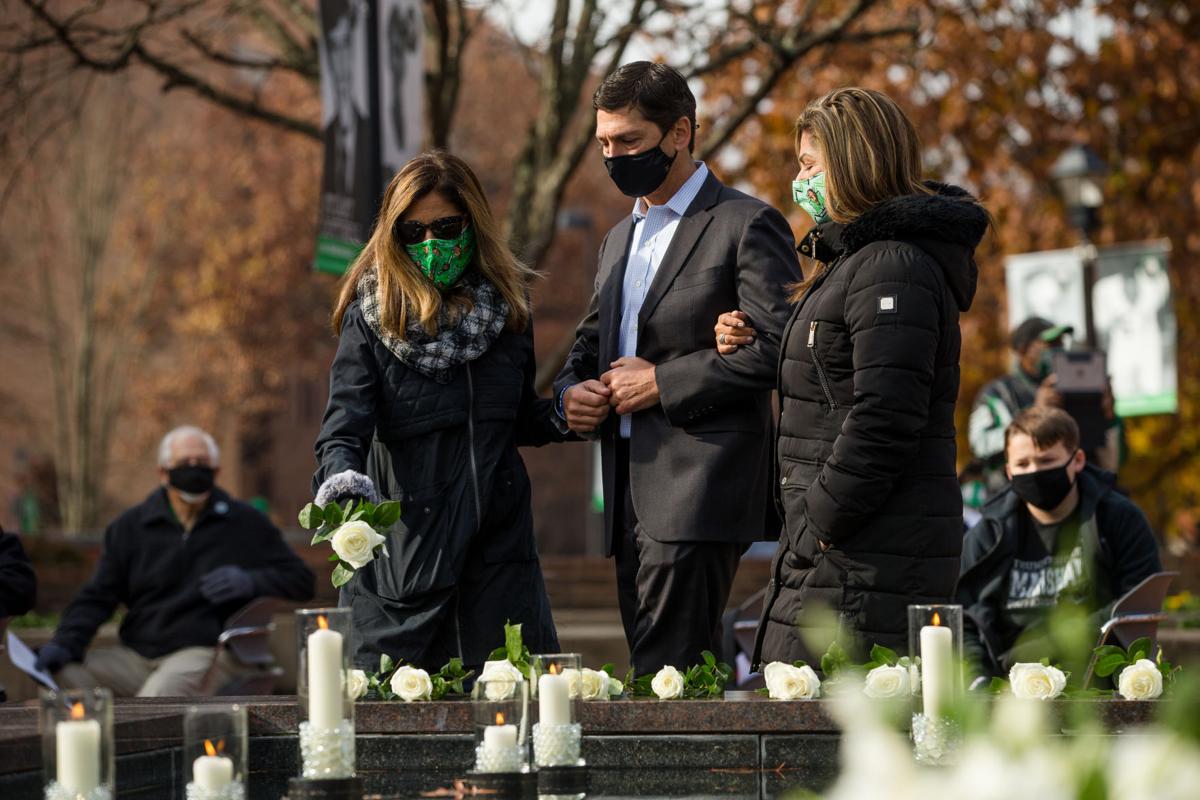 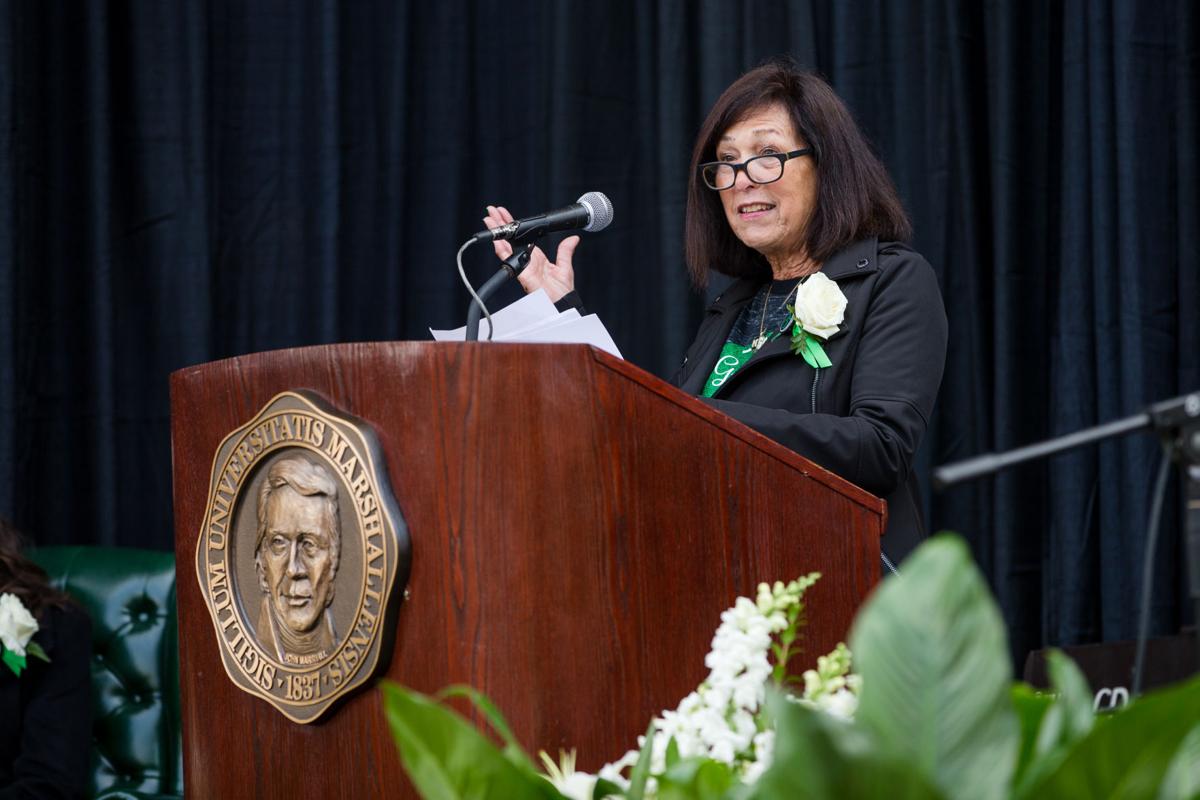 Lucianne Kautz-Call, who lost her father in the Marshall plane crash, delivers the keynote address during Marshall University’s 50th annual Memorial Fountain Ceremony on Saturday, Nov. 14 at the Memorial Student Center in Huntington. 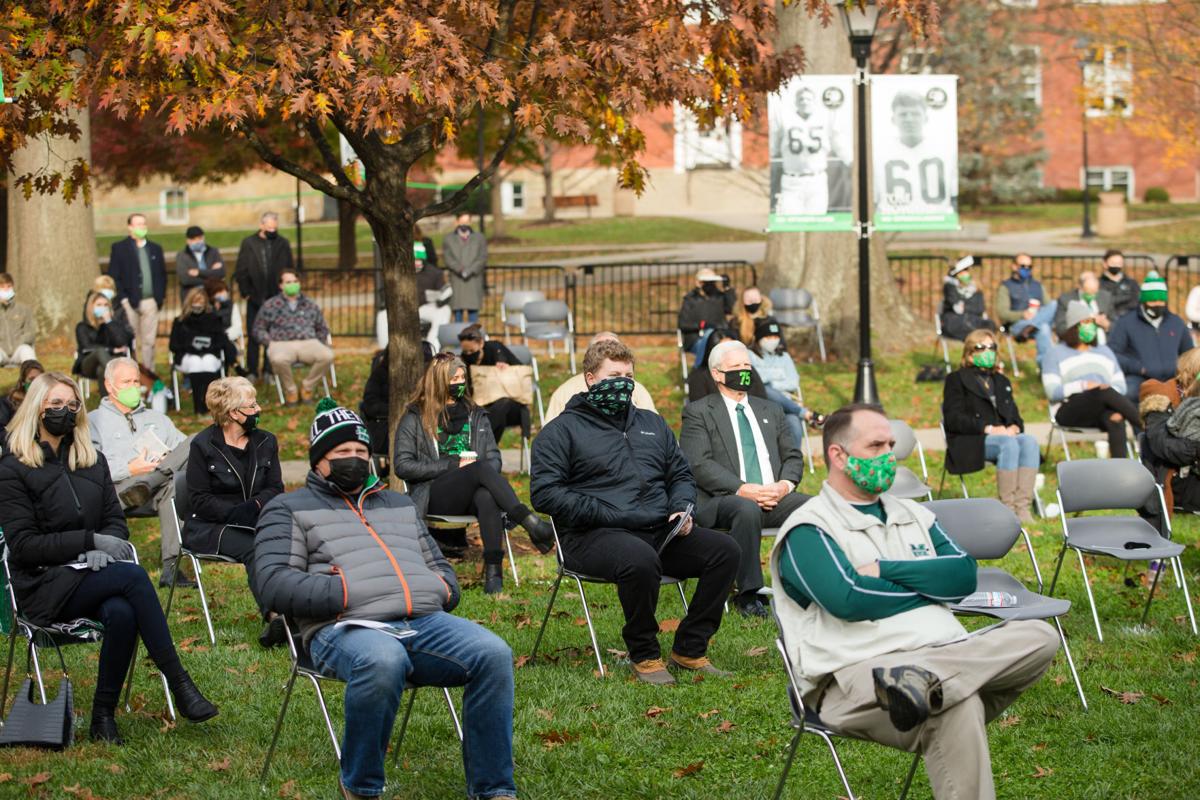 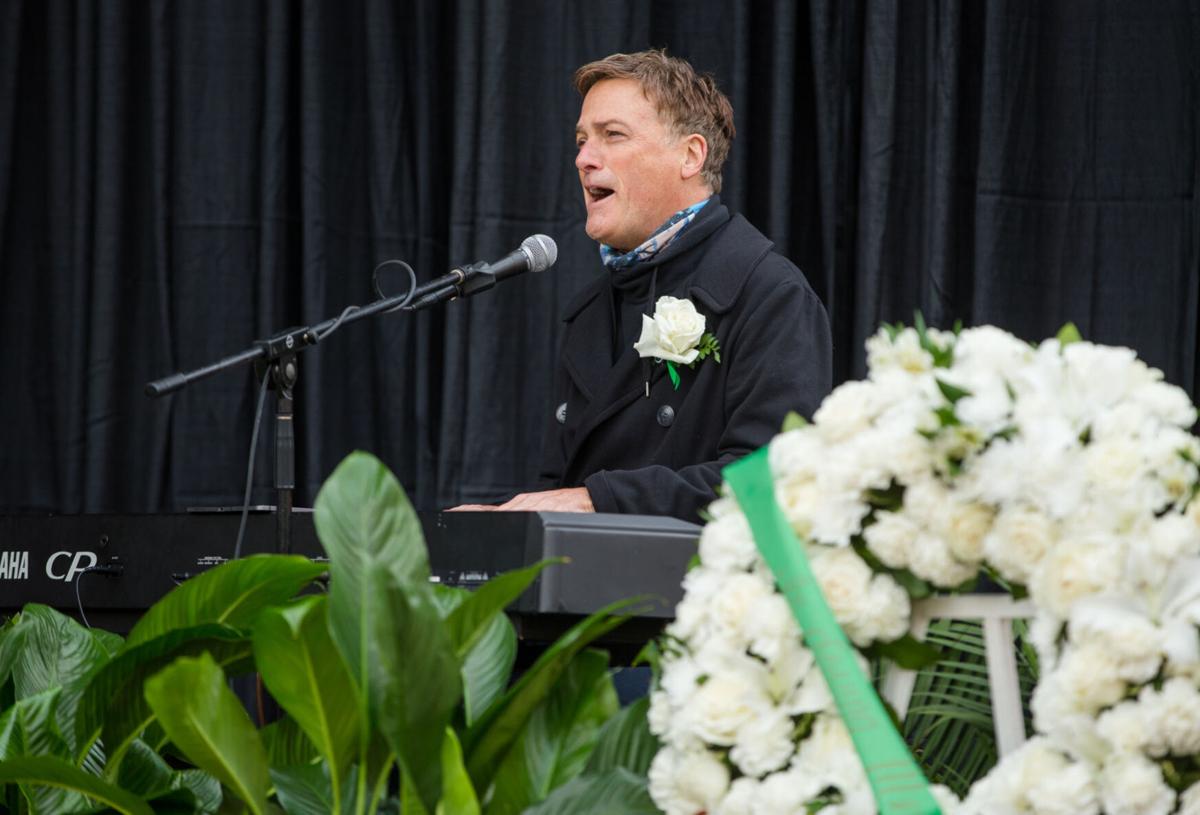 Lucianne Kautz-Call, who lost her father in the Marshall plane crash, delivers the keynote address during Marshall University’s 50th annual Memorial Fountain Ceremony on Saturday, Nov. 14 at the Memorial Student Center in Huntington.

HUNTINGTON — Lucianne Kautz-Call lifted a Marshall University football helmet in the air and directed the crowd to join her in shouting an all-too-familiar phrase.

“We Are … Marshall,” she said as the crowd proclaimed the phrase three times to conclude her keynote speech at the 50th annual memorial service honoring the 75 lives lost Nov. 14, 1970, when an aircraft carrying Thundering Herd football players, coaches, community members and others crashed near Tri-State Airport in Wayne County.

On one side, the helmet had the traditional block “M” logo; on the other, No. 75. Down the middle, the names of each individual who perished 50 years ago were listed.

Charlie E. Kautz, Call’s father, who served as director of athletics at Marshall beginning in 1969, was on board Southern Airways Flight 932 that fateful night.

Exactly one half-century later, Call stood at the podium and shared memories of growing up in the Marshall community, honoring her father and telling Marshall’s comeback story to the crowd gathered near the fountain on the Memorial Student Center Plaza on Saturday morning.

“We come together to reflect and to remember 75 souls. Today is gameday — three words our community didn’t know if they’d ever hear again,” said Call.

“Hallelujah for 50 years of Marshall football.”

Call, a graduate of Marshall and former Herd cheerleader, has held an active roll in the planning committee for the annual Fountain Ceremony and was asked by the remaining members of the committee to be this year’s keynote speaker.

Marshall Thundering Herd football head coach Doc Holliday and the rest of the team were unable to attend the ceremony this year as they were scheduled to play a football game against Middle Tennessee State just a few hours later, but Holliday gave his remarks in a prerecorded video message.

Three-time Grammy Award winner and Kenova native Michael W. Smith performed musical numbers “Amazing Grace“ and “Sovereign Over Us” while detailing his personal memories from the time of the crash that occurred within 10 miles of his home.

“I remember my dad took me out to see what was going on,” Smith said, adding that “looking over that hill full of fire forever changed my life.

“The town died, but the town came back,” he said.

The same is true for the university and the football program.

“(To go) from ashes to the winningest team in the 1990s is an amazing feat. It made 75 dreams come true,” said Call. “We came from ashes to glory, and we are still keeping alive their dreams, memories, hopes and aspirations every time we take the field.”

Joining in the ceremony this year were four members of the 1970 East Carolina football team who made the trip from Greenville, North Carolina, to Huntington. Each placed a rose on the Memorial Fountain moments after the water was turned off and a wave of silence swept over Marshall University’s campus.

HUNTINGTON — On Saturday, hundreds gathered in Huntington in socially distanced fashion for …