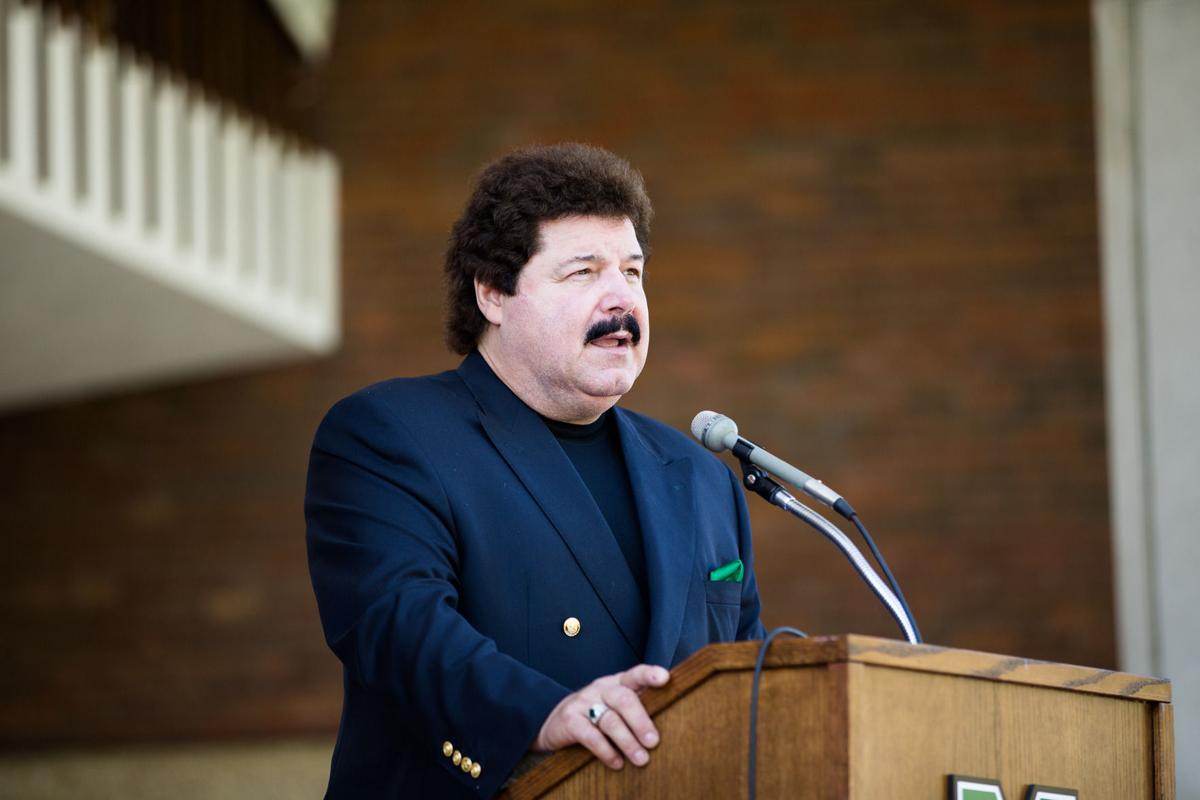 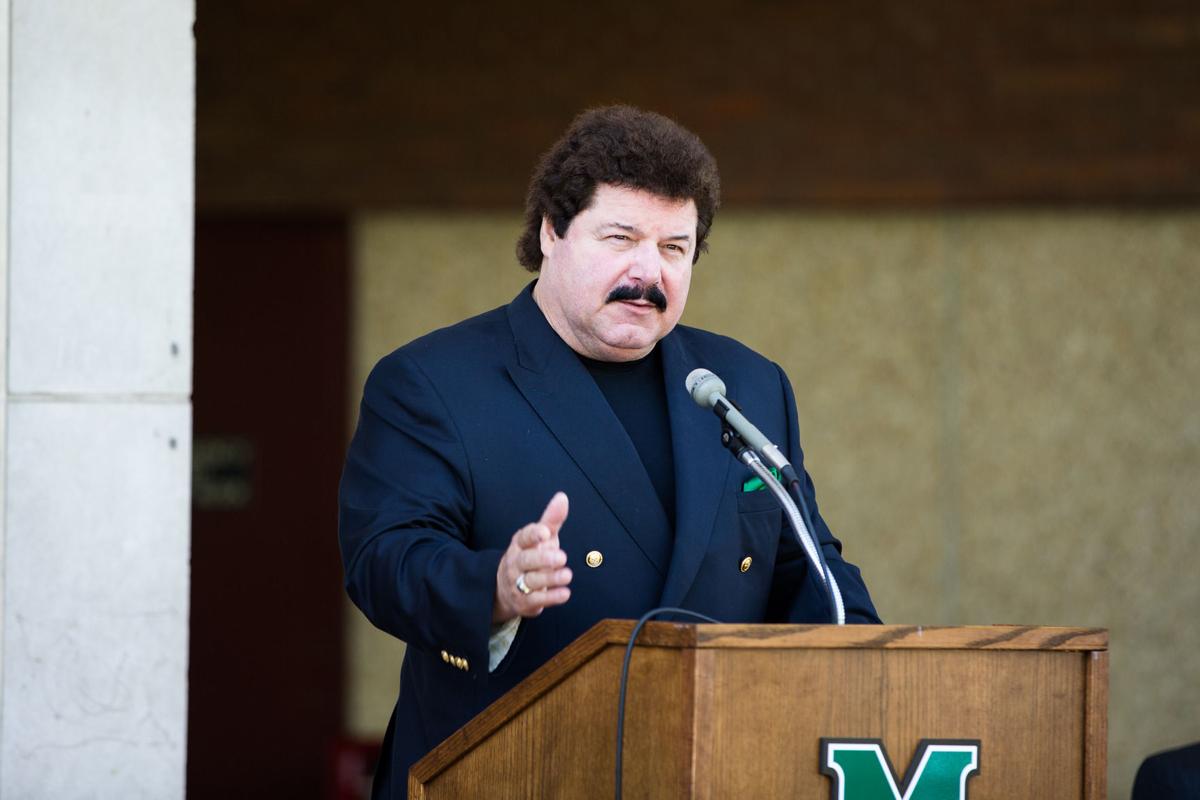 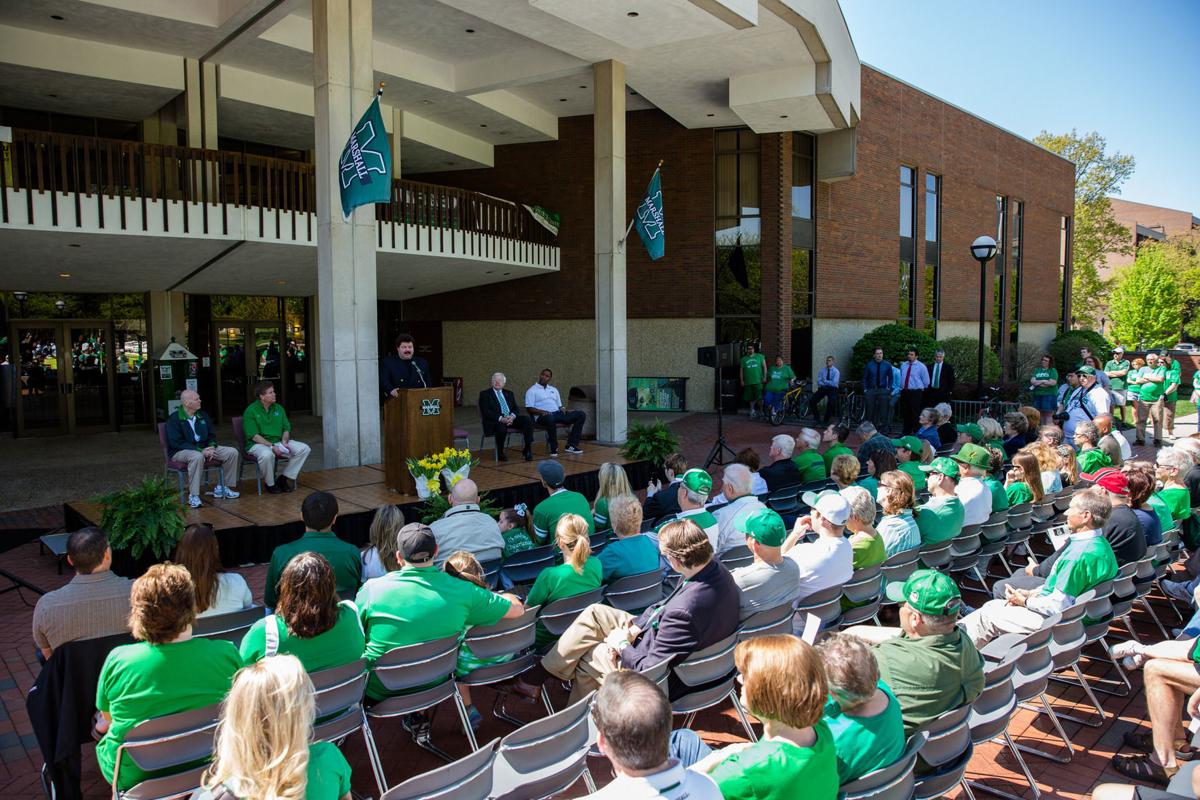 HUNTINGTON -- Sam Botek had a lot to smile about Saturday morning. The Toledo, Ohio, native found himself on the podium to serve as featured speaker at Marshall's Spring Fountain Ceremony where the Memorial Fountain at Memorial Student Center is turned on to signify the rebirth of Thundering Herd football.

Botek, in his first official trip back to his alma mater, played a role in that rebirth after the tragic plane crash on Nov. 14, 1970. Botek was a member of the Young Thundering Herd in 1971, the first team to take the field under the direction of coach Jack Lengyel. Botek talked about those days and the long, painful climb back to success as his son Mac, a Marshall student, sat in the front row.

Once former Marshall quarterback Byron Leftwich concluded his remarks, it was time for the fountain to come back to life. All in the audience, including the current Herd football team and staff, faced the fountain and saw the water shoot to the top of the structure.

"Oh my God. It's so unique a time in my life and his (Mac)," Botek said. "It's a rebirth for us. I'm doing something for the community about that team, to have him here finishing his freshman year and see the fountain go on is special. I can't put it into words. My speech. ... I could've memorized it, but I wanted to say the things in my heart, not paraphrase. It was too important.

"I feel like I'm in a time warp. I never expected this to happen. I'm so in love with the university and he gets to enjoy the experience."

Botek was an All-City running back as a senior at Toledo St. Francis DeSales High School. In 1971, the NCAA gave permission for Marshall to play freshmen. That decision made it easy for Botek to become a member of the Young Thundering Herd and part of a unique rebuilding process. He was moved to tight end and served as captain of the kickoff team. He got his degree in 1975. He has since retired from the position of president of Metopolitan Distributing.

In 2006, Warner Brothers Pictures released "We Are Marshall." The movie told how Marshall and Huntington struggled to recover from the tragedy and find hope in the Young Thundering Herd.

In the movie, there's a scene where Lengyel (played by Matthew McConaughey) and assistants are at a blackboard that have the names of recruits on it. Names get marked out to signify the prospect went elsewhere, but one, Botek, stays untouched, signifying he's Marshall bound.

Marshall athletic director Mike Hamrick talked about that scene as he introduced Botek.

"Botek said yes. I got a chance to meet this guy a year, year and a half ago and find out what he's all about," Hamrick said. "He's one of those guys who came to Marshall to let Marshall shape his life and play football for the Young Thundering Herd. He's so in love with Marshall. This guy took a chance and it paid off. We're glad he's here today."

Botek said over time he and others realized the plane crash went beyond football. Lives were touched in many ways and the road back has been difficult.

He said Saturday was a day of renewal.

"It's a time for remembering, looking at the present and exciting future of our great university," he said. "I was recruited to help rebuild a team that had been devastated by tragedy. I don't think I fully realized the state of sadness in the Huntington community when we first arrived. As time went on, we were told by our older teammates like Nate Ruffin, our coaches about the loss and we began to feel the pain, hope and expectations that were placed on us."

Botek told the audience about the letter the Young Thundering Herd received from then president Richard Nixon prior to the start of the 1971 season. "We pulled together to fulfill the challenge of continuing the Marshall football program," he said.

Certain scenes in the movie drove that point home.

"For the first time I really felt the pain everyone was enduring, especially when I saw all the sad ceremonies from a senseless tragedy that occurred," Botek said. "I realized what many people were trying to convey to us. We did what we could. Now 43 years later, a continuous program of success and pride is flourishing at this very special university, Marshall."

As a business leader in Toledo, Botek took part in a lot of fundraising. At one event, he met and later had lunch with Ray Nitschke, former NFL All-Pro linebacker with the Green Bay Packers. He asked Nitschke what it was like to play for a special team and a special coach, Vince Lombardi.

"He did a complete personality change," Botek said. "There were special memories only he knew. He looked me in the eye and told me it was the greatest time of his life. He told us coach Lombardi made us challenge ourselves to become successful. Sucess, in Green Bay or at Marshall, does not come easy."

When it came time for Botek's son to pick a college, he said Mac's choice was Marshall from the start. The good memories Botek had four decades ago his son enjoys now in Huntington.

"The one outstanding memory I recall. ... the wonderful people here," Botek said. "The people of Huntington and West Virginia are truly the kindest people I've ever met. Mac told his friends back home the same thing. Susan (his wife) and I can equivocally state the people at this great university and Huntington are God's finest.

"No matter where you have a residence or where you come from, once you're here, you have a permanent home. You truly become a son or daughter of Marshall. God bless Marshall U."

During Leftwich's talk, he told the audience how he once looked at the scores of games from the days of the Young Thundering Herd and it pained him. One score -- Miami (Ohio) 66, Marshall 6 -- didn't set well and he intended to do something about it.

"They were just running up the scores. They had to be," Leftwich said. "I'll never forget it. We took it personally. They are part of our family. Those guys come to practice, tell us the stories. We're shaking the hand of a man who went through that. They'd tell us they're beating us bad. All you can do is go out and try to represent those guys well. I just wanted to get a little payback. I meant that. We tried to put as big a number on anybody as we possibly could. Most of the time we succeeded at that."

Botek smiled. What he endured 40 some years ago had been worth it.