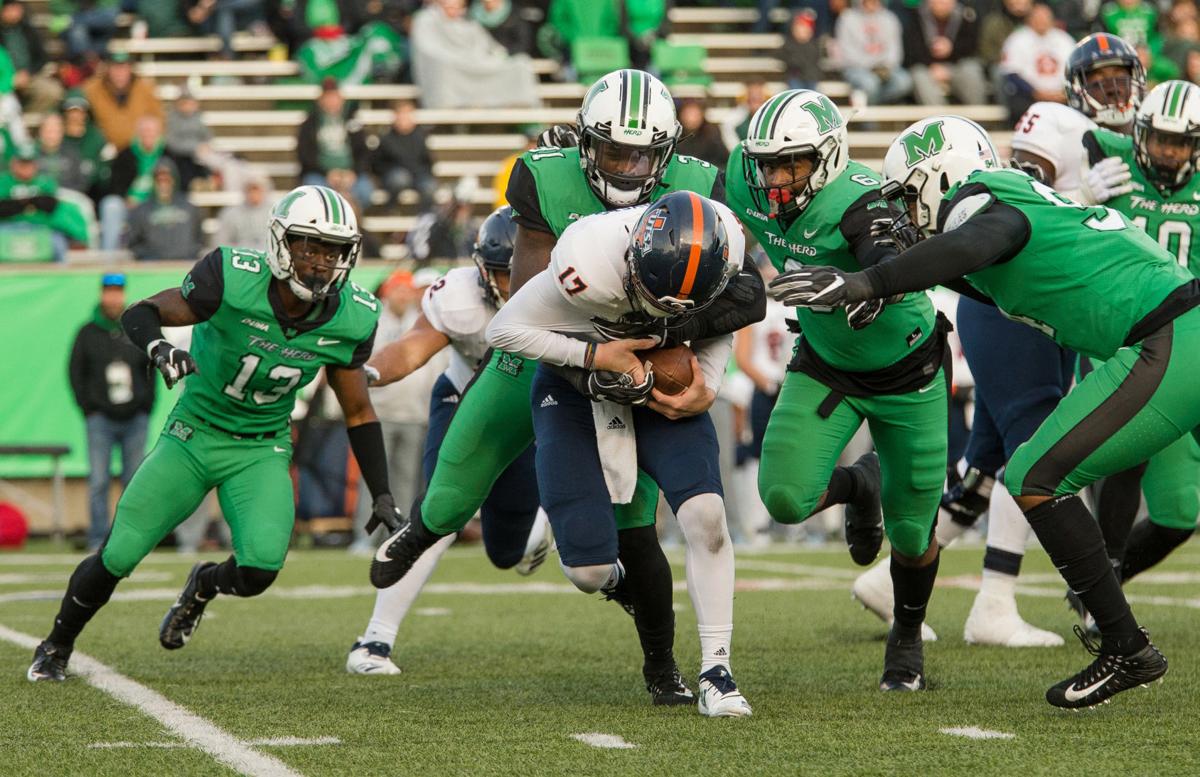 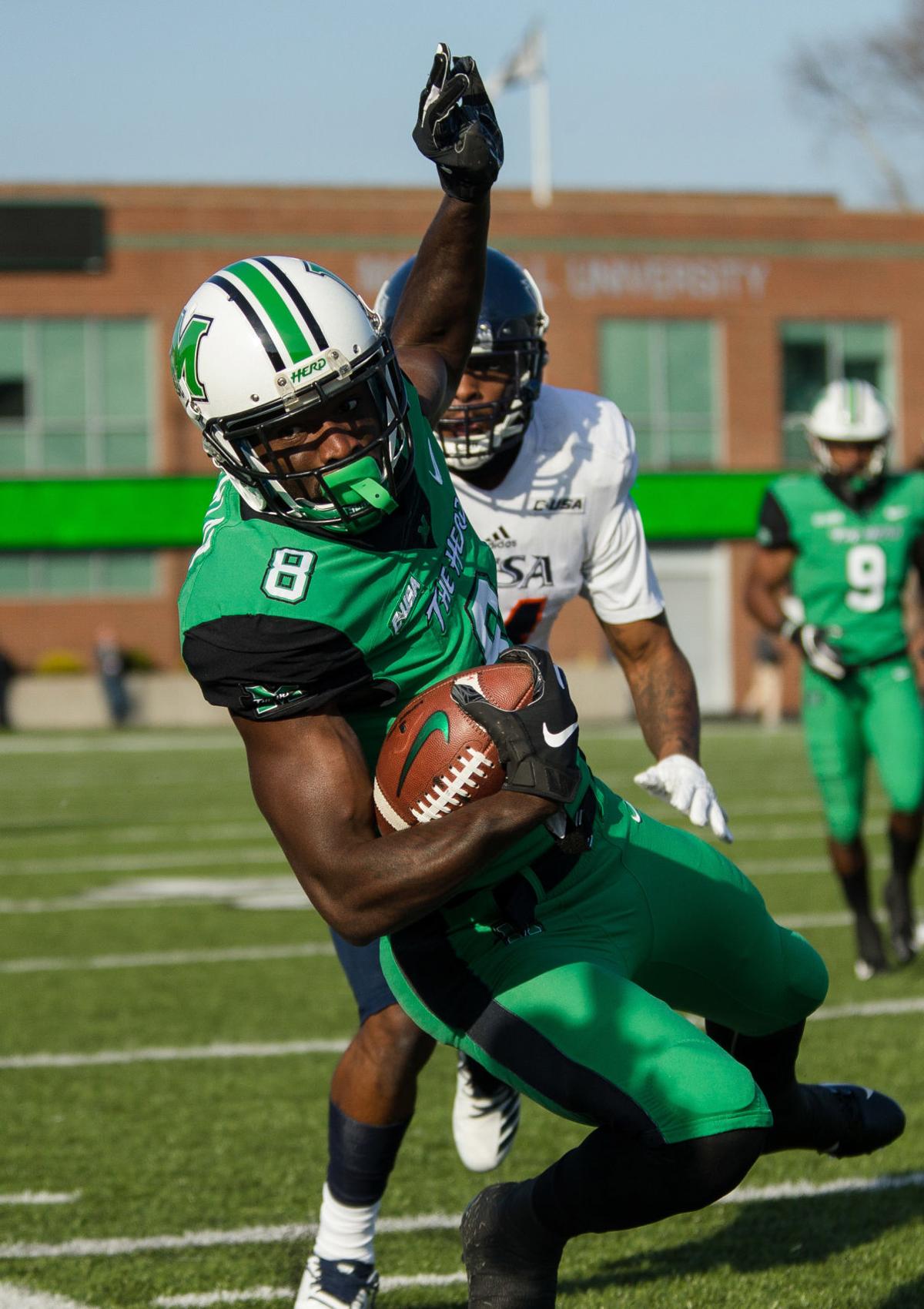 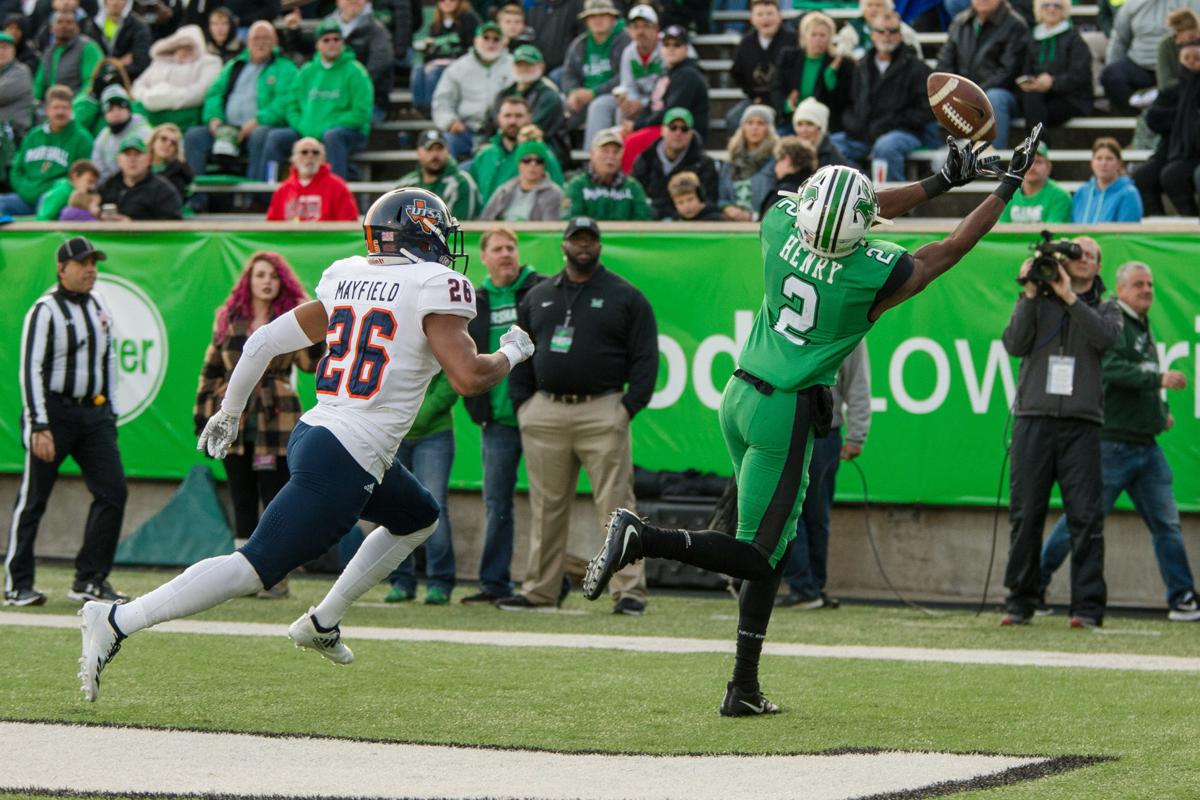 On Saturday, the Thundering Herd made sure Senior Day was memorable.

Marshall limited UTSA's offense to 137 yards, which included a minus-26 total in rushing, as the Herd started strong and never looked back in a 23-0 win over the Roadrunners in front of 18,502 spectators in Joan C. Edwards Stadium. UTSA's rushing yardage was a program low for Marshall on defense and the Roadrunners on offense. The Roadrunners averaged a 1-yard loss on each rushing attempt.

"There's never been a team here in Marshall history to ever do that," Marshall head coach Doc Holliday said. "That's a first in how many ever years and there's been some really good defensive football teams run through here. ... When you do that as a defense, that's special."

For a senior-laden defense, it was a special memory as they exited Joan C. Edwards Stadium for the final time.

"We had the mindset of making sure that we made a statement," Marshall linebacker Chase Hancock said. "They beat us last year in a close game and it was kind of on the defense. We came into this game and wanted to make sure that didn't happen this year."

Marshall's win continued a strong trend against the Roadrunners from a defensive perspective. In three meetings against UTSA, Marshall has allowed just 19 points and one offensive touchdown.

For the Herd offense, redshirt freshman quarterback Isaiah Green set a season high, throwing for 387 yards and two touchdowns. Marshall had two receivers with more than 100 yards. Tyre Brady caught six passes for 162 yards and a touchdown while Obi Obialo caught five passes for 103 yards. It was the first time the Herd had two receivers eclipse the 100-yard mark since Davonte Allen (141) and Tommy Shuler (132) against Western Kentucky in 2014.

"At the end of the day, Isaiah threw for more yards than he's thrown for, and Obi had his season high, and Tyre played well," Holliday said.

Obialo said despite the offense missing on scoring opportunities in the red zone, it was exciting to see all facets of the passing attack get into a rhythm between the 20-yard lines.

"It's exciting, it's fun - just going out there and just playing like we do in practice," Obialo said. "It's fun to see that play out in the game."

The Herd's lone score of the second half was a 26-yard field goal by Justin Rohrwasser, who connected on three field goals while also recovering a fumble on a kickoff in the first half.

Green threw for 250 yards in the first half and connected on scoring strikes to Brady and Artie Henry.

The Herd had a slight scoring lull offensively in the second quarter until Green's 8-yard scoring toss to Henry with 3:00 left extended the lead to three scores. A 21-yard field goal by Rohrwasser sent the teams to the locker room.

It didn't take long for Marshall to assert itself in all three phases Saturday.

After UTSA's first drive netted zero yards, Marshall methodically drove inside the 10-yard line before settling for a 26-yard field goal from Rohrwasser.

It wouldn't take long for the Herd to find the end zone soon after, however.

On the ensuing kickoff, Marshall's Chase Hancock forced a fumble that Rohrwasser recovered, and Green went up top to Brady for a 37-yard score on the first play following the takeaway to give the Herd 10 points in a 13-second span. Brady caught five passes for 164 yards and a touchdown in the early going.

Marshall's first four drives started at midfield or better as the defense established dominance early. The Herd did not allow UTSA (3-8, 2-5) a first down until 12:09 of the second quarter.

If there was a concern for the Herd, it was the performance of the offense in the score zone early in the game.

All eight of Marshall's first-half drives ended in UTSA territory, and the Herd had just four scores - two touchdowns and two field goals. The Herd offense drove inside the 10-yard line twice and stalled out to settle for field goals while also having a field goal blocked and missing another.

"Offensively, we had 500-plus yards, but when you get down in the score zone, you've got to score points," Holliday said. "We were kicking too many field goals, and I felt all along in that game we've just got to put the ball in the end zone. We've got to get better at doing that."

Marshall's offense was a bit stagnant early, but the defense had no such issues, limiting UTSA to negative yards rushing in the first half and only three first downs.

UTSA quarterback Bryce Rivers came on in relief of starter Jordan Weeks and finished 16 of 31 for 158 passing yards and an interception. Marshall registered five quarterback sacks - led by a pair from Omari Cobb - to keep pressure on the Roadrunners' passing game.

"We weren't quite sure who was going to play (quarterback for UTSA), but we knew they'd be inexperienced so we were going to bring pressure out of all personnel groups," Marshall defensive coordinator Adam Fuller said. "We went more three-down (defensive linemen) this week than we had in other weeks, and that was designed. We brought legitimate pressure in it - corner fires. We knew we had to apply pressure. If they were going to get yards, they were going to be hard yards. Our guys did a good job of executing."

Marshall hits the road for its scheduled regular-season finale when the Herd takes on FIU at noon Saturday in Boca Raton, Florida. There is the potential for an additional game Dec. 1 with Virginia Tech to be added.

Marshall takes on UTSA during a C-USA football game on Saturday, Nov. 17, 2018, at Joan C. Edwards Stadium in Huntington, W.Va.

The weak get weaker.

This is Conference USA's most insurmountable problem in football.

The bad teams are off-the-charts bad. They are an albatross dragging the entire league's image, profile and reputation down, down, down.

HUNTINGTON - Marshall University's defense made the UTSA Roadrunners' offense appear as if it were executed by Wile E. Coyote.

Virginia Tech, Herd could make up for hurricane cancellations on Dec. 1

HUNTINGTON - For weeks, there was a looming question around the halls of the Shewey Building in Joan C. Edwards Stadium at Marshall University.