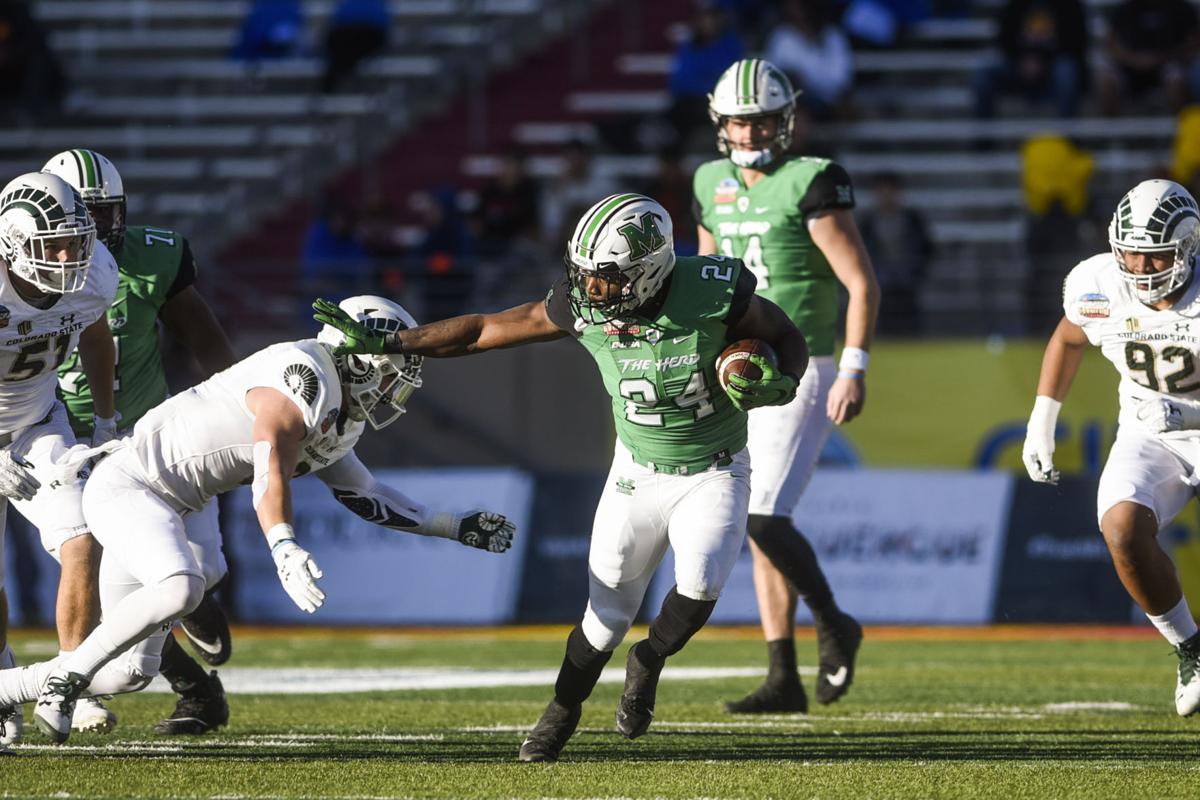 Nick Fojud/For The Herald-Dispatch Marshall running back Keion Davis stiff-arms a Colorado State player during the first half of the 12th annual Gildan New Mexico Bowl on Saturday, Dec. 16, 2017, in Albuquerque, N.M. 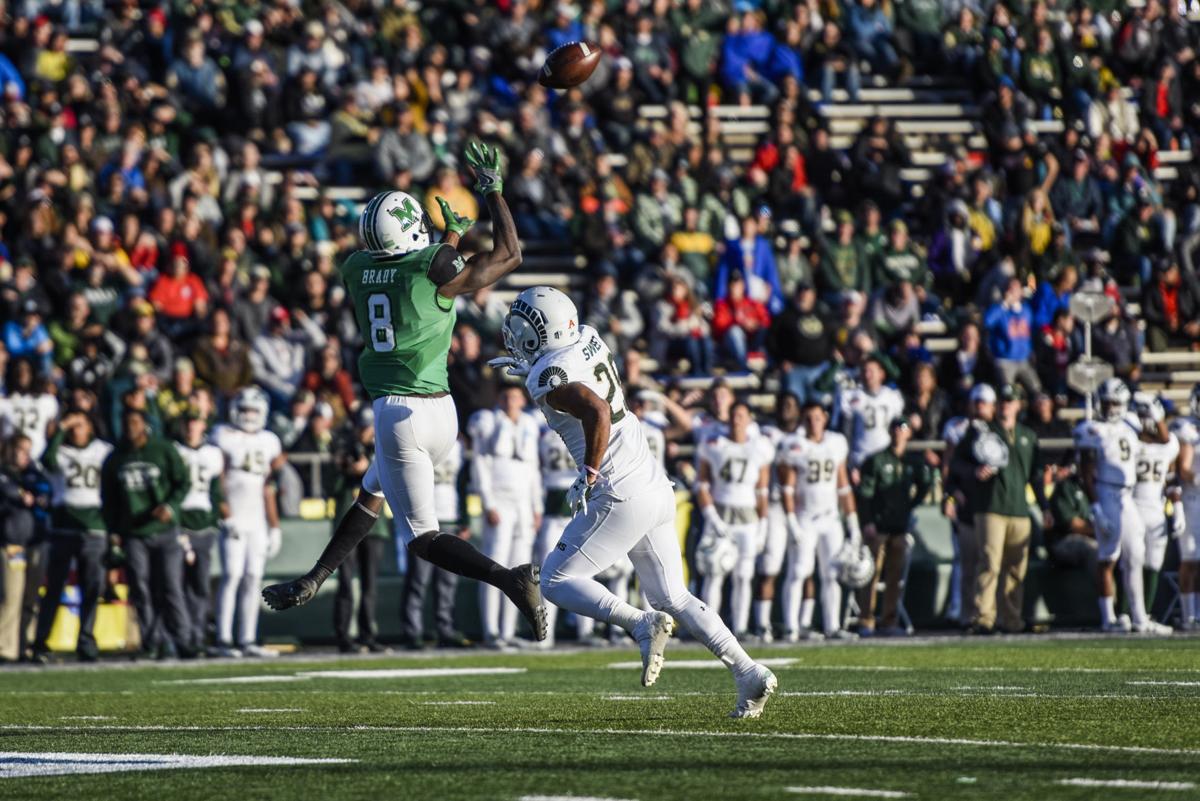 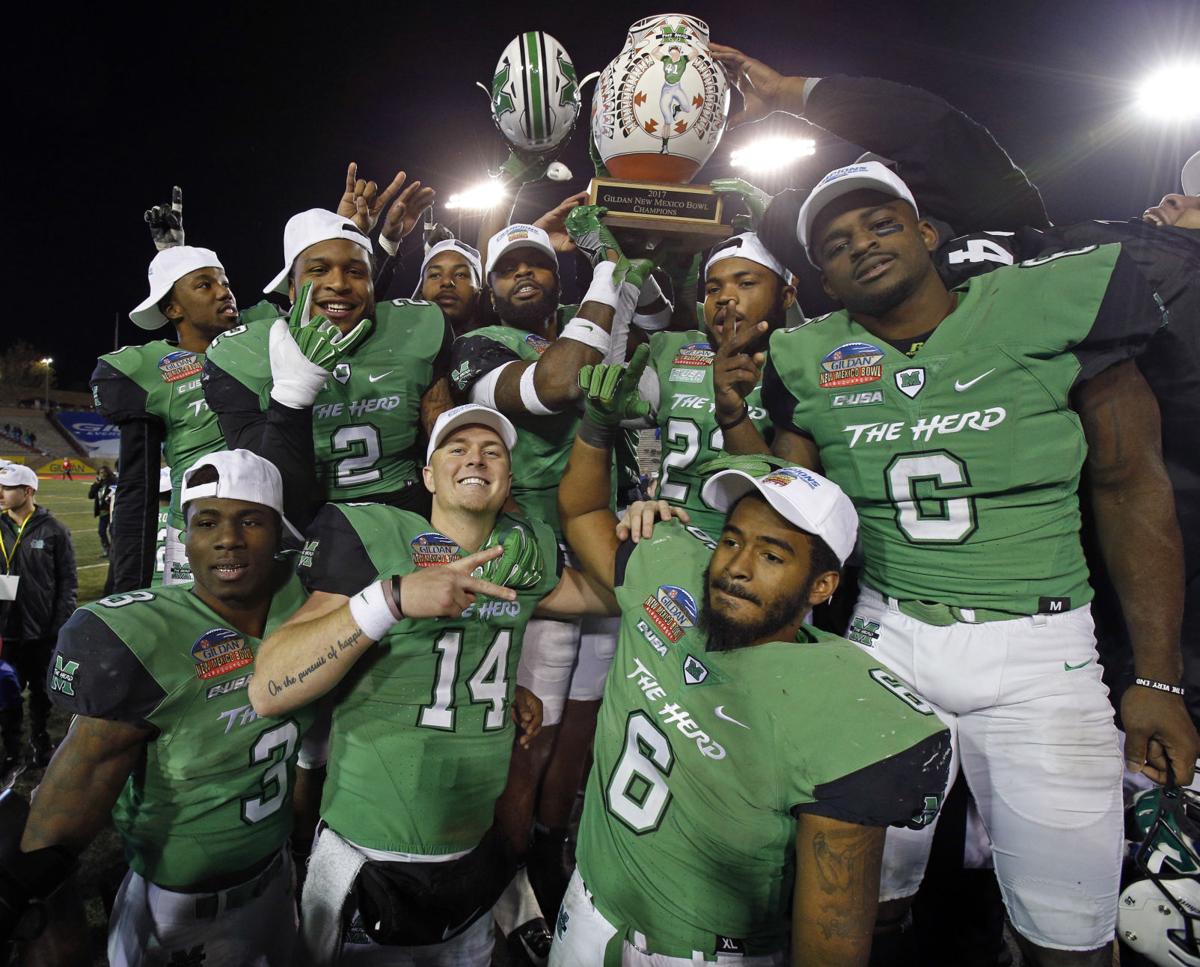 Nick Fojud/For The Herald-Dispatch Marshall running back Keion Davis stiff-arms a Colorado State player during the first half of the 12th annual Gildan New Mexico Bowl on Saturday, Dec. 16, 2017, in Albuquerque, N.M.

ALBUQUERQUE, N.M. — Many wondered if the elevation in Albuquerque, New Mexico, would be an issue for Marshall’s football team as it prepared for the Gildan New Mexico Bowl.

As it turned out, it appeared to give the Thundering Herd an added pep in its collective step.

Marshall established consistency in the run and pass game and hit on several big plays early before holding off a fourth-quarter Colorado State rally in a 31-28 win over the Rams in front of an announced crowd of 26,087 fans at Dreamstyle Stadium on Saturday afternoon.

With the victory, Marshall finishes the 2017 season at 8-5 overall and takes momentum into the offseason.

“Ending the season the way we did and wearing these ‘Bowl Champs’ hats, there’s nothing else we’d rather be doing right now,” Marshall center Levi Brown said. “For these seniors, we sent them out the right way and we’ve got a lot of young talent moving forward. It’s exciting.”

The key play in the game came on the defensive side of the football for the Herd. With Colorado State facing fourth-and-5 and trailing by three, Marshall senior Davon Durant came free on a blitz. Instead of trying to deliver a knockout blow, though, Durant jumped high in the air to deflect the pass of Colorado State quarterback Nick Stevens. Stevens caught the deflection, but the Herd defense was able to tackle him behind the line to take over on downs.

The play ended Colorado State’s final fourth-quarter threat in which the Herd saw a 17-point lead whittle away to a field goal after Stevens threw a 24-yard score to Detrich Clark before sneaking in for a 1-yard touchdown as well.

The key to Marshall’s win was its defensive pressure. Coming into the game, Colorado State had allowed just eight sacks in 12 games, which tied for second nationally with Marshall. The Herd, though, sacked Stevens five times, almost daring the Rams to go deep while bringing more players on blitzes than Colorado State could block.

“That quarterback is so talented and their skill guys are so talented that if you gave him time to sit back there and throw the ball and feel comfortable, you’re going to have a hard time matching up,” Marshall head coach Doc Holliday said. “We were hoping we could get some pressure and we did. We gave up a couple of big plays because of it, but at the end of the day, we won the game because we were able to get pressure and get in his face.”

Channing Hames led the way for the Herd defense, finishing tied for a team-high with eight tackles and 2.5 tackles for loss, including 1.5 sacks. He also had two quarterback hurries, which led to his selection as the Gildan New Mexico Bowl defensive most valuable player.

“Channing Hames, I’m so proud of him for stepping up tonight,” Marshall defensive tackle Ryan Bee said. “It’s been hammered in our heads all week by coach (J.C.) Price to get after the quarterback. He did a tremendous job.”

Marshall’s aggressive nature on both sides of the ball led to a 17-point lead after three quarters.

Offensively, the Herd got big plays in both the run and passing games. Marshall finished with 501 yards of total offense — 239 rushing and 262 passing.

Wide receiver Tyre Brady was named the game’s offensive MVP after hauling in six catches for 165 yards and a touchdown, which came during a first half in which he put up 136 yards.

Brady’s early presence forced Colorado State to adjust to the passing game late in the first half, and the Herd took advantage with big running plays from Keion Davis and Tyler King.

Davis ripped off a 68-yard touchdown late in the first half that gave Marshall a 21-14 lead and King took Marshall’s first offensive play of the second half for a bowl-record 90-yard rushing touchdown.

Both Davis and King made athletic plays to reach the end zone on their long runs. Davis shed a tackle at the 10-yard line before walking into the end zone, while King made one cut to juke a safety before outracing the Colorado State defense to the end zone.

The Herd then methodically worked six minutes off the clock with a 14-play, 72-yard drive that ended with Kaare Vedvik’s 21-yard field goal to increase the lead to three scores before the Colorado State rally.

The game featured two elite receivers in Colorado State’s Michael Gallup — a Biletnikoff Award finalist — and Brady, a semifinalist for the award. The advantage went to Brady this day as he returned from injury and an illness in the hours before the game to set the tone for the Herd offense.

Brady opened the scoring early in the second quarter when he ran under a well-thrown pass from Chase Litton before sprinting to the end zone for a 76-yard score.

He also hauled in a 47-yard pass on the Herd’s next drive to set up Litton’s 15-yard touchdown pass to Ryan Yurachek.

“Let me tell you something about this guy right here,” Holliday said, looking at Brady. “(Friday) night at midnight, we didn’t think he was going to play today because he was so sick that he couldn’t get out of bed. He spent all night with doctors trying to get him squared away to get on the field today — and what a great effort.”

Gallup finished with six catches for 68 yards to reach 100 catches on the year, establishing a Colorado State single-season record.

The second quarter was a stark contrast to a scoreless first quarter. The teams scored touchdowns on five consecutive possessions and combined for 35 points and 353 yards as the Herd took the advantage into the locker room.

Stevens kept Colorado State in it during the second period, finding Clark for one of the Rams’ two touchdown connections before calling his own number for a 9-yard scoring run that knotted the game at 14 before Davis’ big run.

Stevens finished 25 of 52 for 320 yards and two touchdowns, both to Clark.

Marshall’s ability to force the Rams into being one-dimensional was crucial.

Colorado State came into the game averaging more than 200 yards on the ground per game, but the Herd defense limited the Rams to 70 yards on 31 carries.

“As a play caller, you’ve got to do a better job of not being one-dimensional,” Colorado State coach Mike Bobo said. “I thought we were one-dimensional tonight. And when you turn one-dimensional, you put too much pressure (on the offense). Defenses have the advantage.”

The win is Marshall’s sixth-straight bowl triumph and the Herd is 5-0 in bowl contests under Holliday.

Marshall has never lost a bowl game as a member of Conference USA.

That's the question just about everybody was wondering during Marshall's 31-28 victory over Colorado State in the New Mexico Bowl here Saturday in Dreamstyle Stadium.

How do you feel about the way the West Virginia high school football playoffs ended?