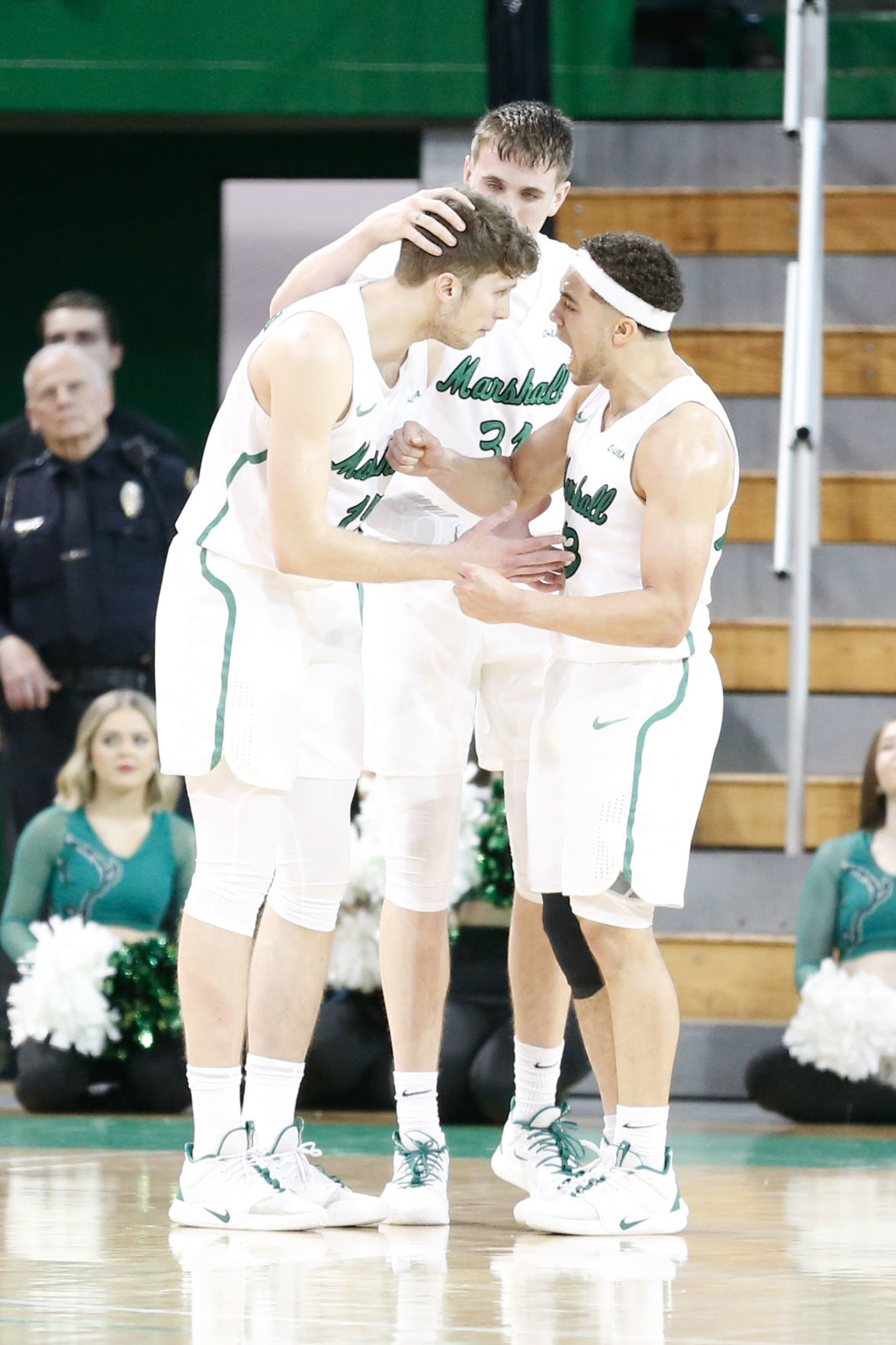 Marshall’s Marko Sarenak, from left, Mikel Beyers and Jarrod West celebrate during the fourth quarter of a Conference USA men’s basketball game against Louisiana Tech on Saturday, Feb. 8, 2020, at the Cam Henderson Center in Huntington, W.Va.

Marshall’s Marko Sarenak, from left, Mikel Beyers and Jarrod West celebrate during the fourth quarter of a Conference USA men’s basketball game against Louisiana Tech on Saturday, Feb. 8, 2020, at the Cam Henderson Center in Huntington, W.Va.

The Marshall men’s basketball team stands now pretty much where it did this time last season — 6-6 in Conference USA, hovering around .500 overall.

The Thundering Herd would love to see a repeat of what happened immediately after this point last year — winning five of their last six games and taking a healthy dose of momentum into the C-USA tournament.

Yet, as much is similar with these two positions, there’s also plenty different. Look at the roster.

The leadership group of last season — Jon Elmore, C.J. Burks, Rondale Watson and Christian Thieneman — is gone. The crew called upon to throw the Herd on its shoulders for this stretch run is an entirely different cast of characters.

Those new leaders know exactly what’s at stake when Marshall begins its two-game swing through Texas on Thursday with a 9 p.m. game at UTSA. After that is a 4 p.m. Saturday game at UTEP, and Marshall (12-13, 6-6 C-USA) must win at least one of those games to lock itself into at least the second pod of C-USA “bonus play.” That’s the conference’s scheduling format that puts the top five, middle five and bottom four teams into pods and has those pods play each other in the regular season’s last four games.

Junior Jarrod West is one of those players now thrust into a leadership role after two years of watching others at the helm. What he saw as a freshman and sophomore are experiences he said he’s leaning on now that he’s one of the players steering the ship.

“Being able to watch how we’ve done it the last two years, we’ve really gotten it together at the end of the year both years,” West said. “It just goes to show that it’s a long season and every game matters.”

West is right that Marshall has turned it on at the end of each of the previous two seasons. In 2017-18, the Herd won its regular-season finale, swept through four C-USA tournament games to win the title, then earned its first NCAA tournament win in program history by beating Wichita State.

Marshall coach Dan D’Antoni can’t put a finger on why his teams end seasons strong. He just notices that it has been a trend for his teams throughout his career.

“My teams — and I don’t even know the reason — even in high school, we always came on strong at the end,” D’Antoni said. “Maybe I should look back at my coaching and see why we don’t start it earlier.

“We give players a lot of freedom,” he added. “It takes them time to figure out how everybody needs to get together and play with that freedom. I don’t want to change the style of play. It’s been good to me.”

It has been good recently to the Herd, who swept a pair of home games last week against Louisiana Tech and Southern Mississippi. In those games, sophomore Taevion Kinsey said, it felt like Marshall was getting back to the style of play of the team at its best — full speed ahead.

“Everybody was clicking and doing their part,” Kinsey said. “I definitely think we’re back to where we used to be when we were playing with Jon and C.J. When we have our foot on the gas, we’re at our best. I have no worries when we’re going the hardest we can go.”

UTSA has a high-octane offense itself, leading C-USA at 79 points per game. The Roadrunners (11-14, 5-7 C-USA) have the league’s top two scorers in Jhivvan Jackson (27 ppg) and Keaton Wallace (19 ppg). They also aren’t shy in giving up points, sitting dead last in the conference at 77.8 points allowed per game. That’s good news for Marshall, no scoring slouch itself at 75.2 points per game, fourth best in C-USA.

The stakes are high for Marshall in these next two games. Two wins could put the Herd into the top pod in bonus play. Two losses could put it in the bottom pod. However Marshall can earn wins this weekend, D’Antoni isn’t going to be picky.

“We’ll just let them try to figure out what they are,” D’Antoni said, “and we’ll make sure that they maximize their performance.”