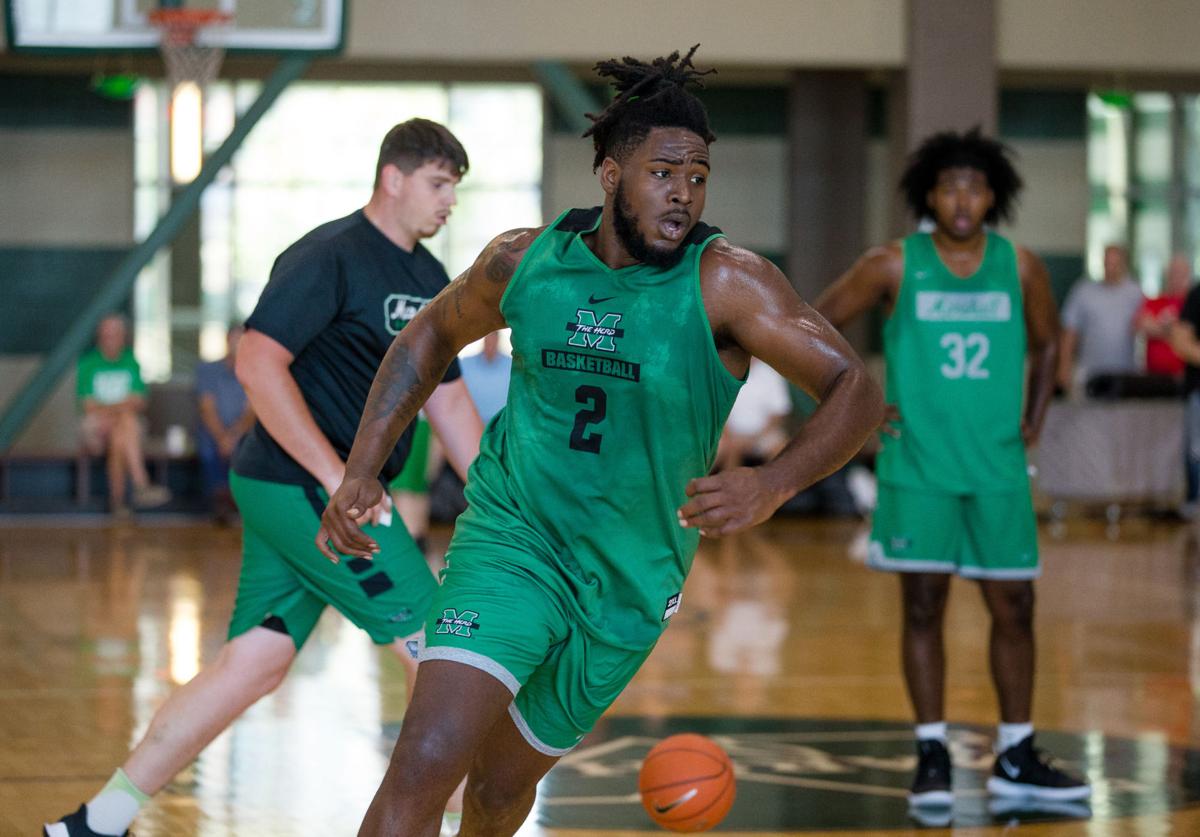 Marshall’s Iran Bennett works through a drill as the Herd men’s basketball team practices on Tuesday, Sept. 10, 2019, at the Marshall Recreation Center in Huntington. 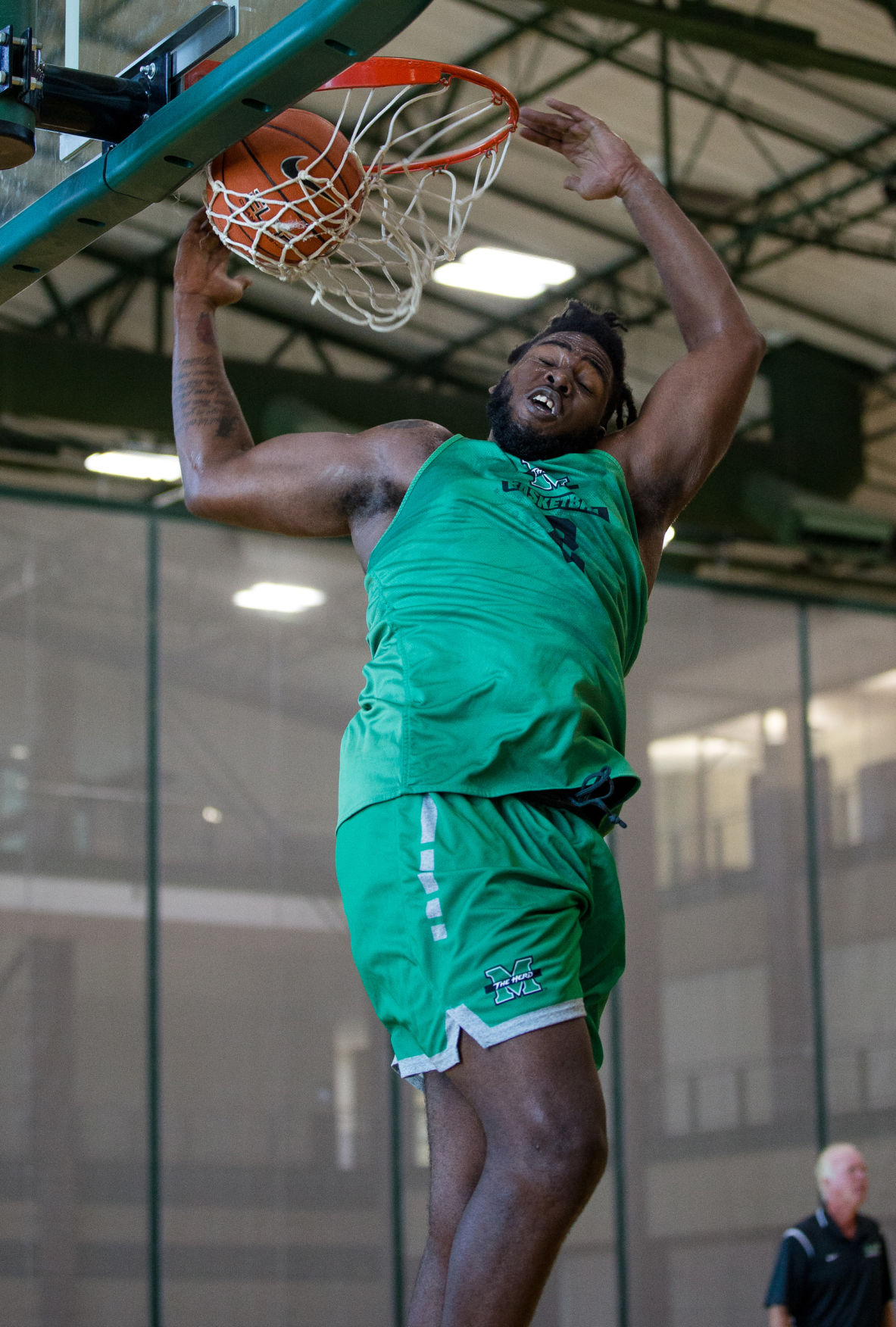 Marshall’s Iran Bennett throws down a dunk as the Herd men’s basketball team practices on Tuesday, Sept. 10, 2019, at the Marshall Recreation Center in Huntington.

Marshall’s Iran Bennett works through a drill as the Herd men’s basketball team practices on Tuesday, Sept. 10, 2019, at the Marshall Recreation Center in Huntington.

Marshall’s Iran Bennett throws down a dunk as the Herd men’s basketball team practices on Tuesday, Sept. 10, 2019, at the Marshall Recreation Center in Huntington.

HUNTINGTON — Ever since Marshall men's basketball center Iran Bennett came to Huntington, head coach Dan D'Antoni had targeted a specific weight goal for the Herd's big man in the middle.

As Bennett and his teammates took the court this week for their first full-team workouts, the smile never left the face of Marshall's 6-9 redshirt sophomore.

It was almost as if a weight had been lifted off Bennett's shoulders.

That's because, in all reality, it had.

Bennett finally hit his mark, dipping below 300 pounds in the week prior to full-team workouts.

"I'm right there at my goal weight, so it feels good," Bennett said. "I'm on the right track."

During the 2018-19 season, Bennett was listed at 350 on the team roster, but his weight actually got up to 380 pounds in the summer prior to the season before he started dropping pounds.

His weight-loss goals did not stop after he broke his foot in the December loss to Texas A&M - one that kept him out for the rest of the regular season. Bennett did return in time for the Conference USA Tournament and the Herd's CIT Championship.

The work never stopped once the season was over, though.

"I was on the track of losing weight when I got hurt," Bennett said. "I got in the swimming pool and did a lot of upper-body workouts that helped a lot. This summer, I stayed here and worked out all summer. I didn't go home that much. I wanted to put in the work."

In addition to the workout regimen, Bennett changed his diet around.

Bennett was on a diet of 30 carbs a day, but now that has increased to 50 as his weight has plummeted.

Bennett admitted that he still likes sweets, but now he's smarter about it.

"I really liked cookies and ice cream," Bennett said with a laugh. "Those were my go-to, but there's a lot of stuff you can substitute that tastes like ice cream. Like whipped cream, it only has 1 carb. You can put some little flavoring in it and imagine it."

Now healthy and lighter, Bennett is back and moving better than ever in his new sub-300 frame (he said he was 298).

As Marshall went through drills this week, Bennett was noticeably active on the glass, using the strength that makes him a nightmare for teammates to keep off the boards while also showcasing his agility in running the floor.

Obviously, in D'Antoni's system, being able to run the floor and move quickly are imperative, meaning there was a physical benefit to Bennett's approximately 80-pound weight loss.

However, Bennett said, the mental side of it has been just as beneficial as he has more bounce in his step these days.

"I can move better and I can get to spots quicker," Bennett said. "I don't get tired as quick and it's just been helping in all aspects. I'm happy with where I'm at."

Marshall junior Jannson Williams said the work Bennett put in has showed itself in pickup games and workouts.

Bennett added that his teammates were vital to him keeping a positive mind set after surgery to repair his foot.

"They've all been there for me, helping me," Bennett said. "I remember when my foot was broke and I first had surgery, Jannson was helping me a lot, getting me back and forth to class. They've been a really big help and we're just a big ol' family."

Bennett is a key figure in what seems like a restructuring, of sorts, of the Herd men's basketball team.

For the first few years under D'Antoni, Marshall's lineup featured short, quick guards who were lights out from 3-point range but struggled to stop teams down low. In fact, there was a point in time during the 2018-19 season that the Herd ran out four guards - Jon Elmore, C.J. Burks, Jarrod West and Rondale Watson - while using Williams or Taevion Kinsey at the "center" spot.

With Bennett healthy and three additions - 6-6 forward Dajour Rucker, 6-7 guard Marko Sarenac and 7-foot center Goran Miladinovic - now on the court, Marshall has the ability to mix combinations that feature plenty of size.

"I'm really excited because we've got a bigger team than usual," Bennett said. "We're much longer and we have a lot of talent - 1 through 17. All of us can play, so it should be a fun year."

What is your prediction for the Super Bowl matchup?