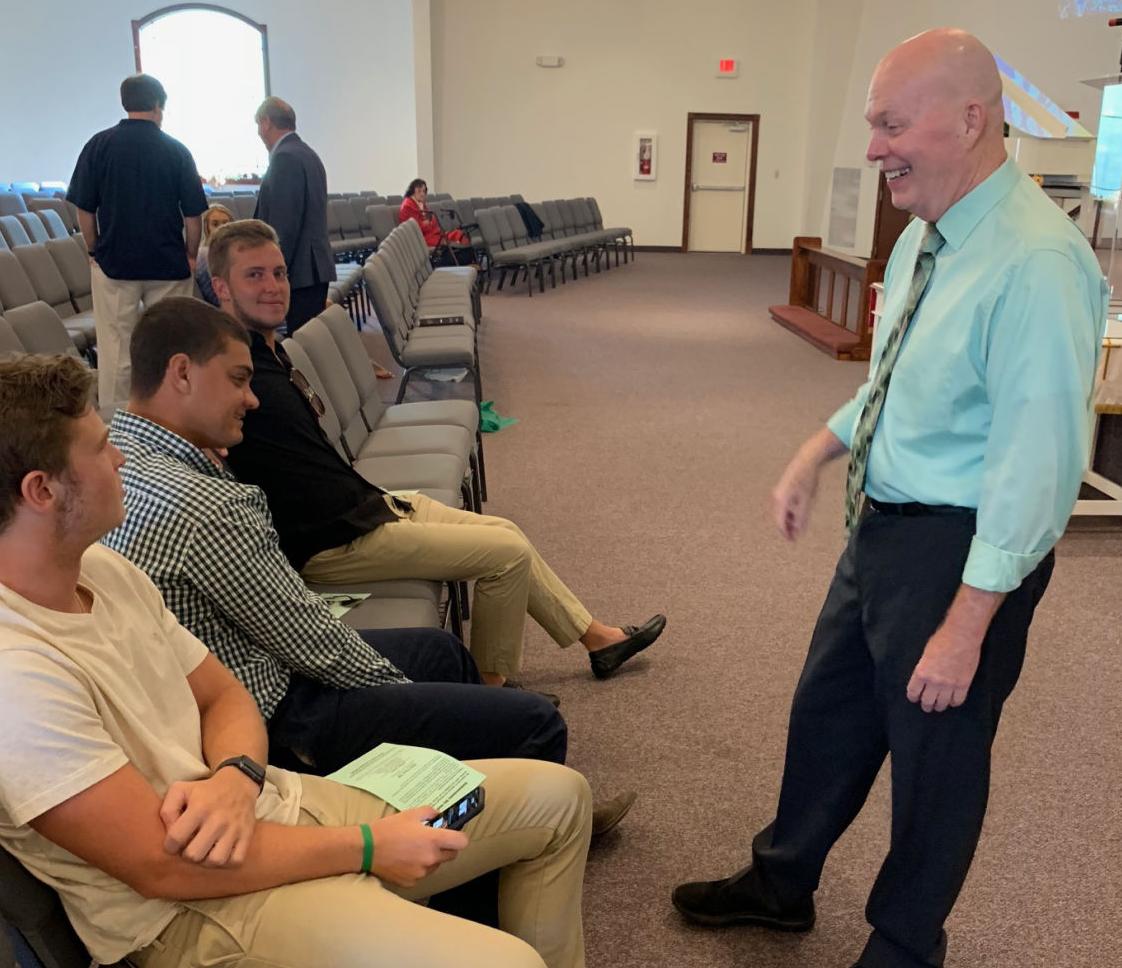 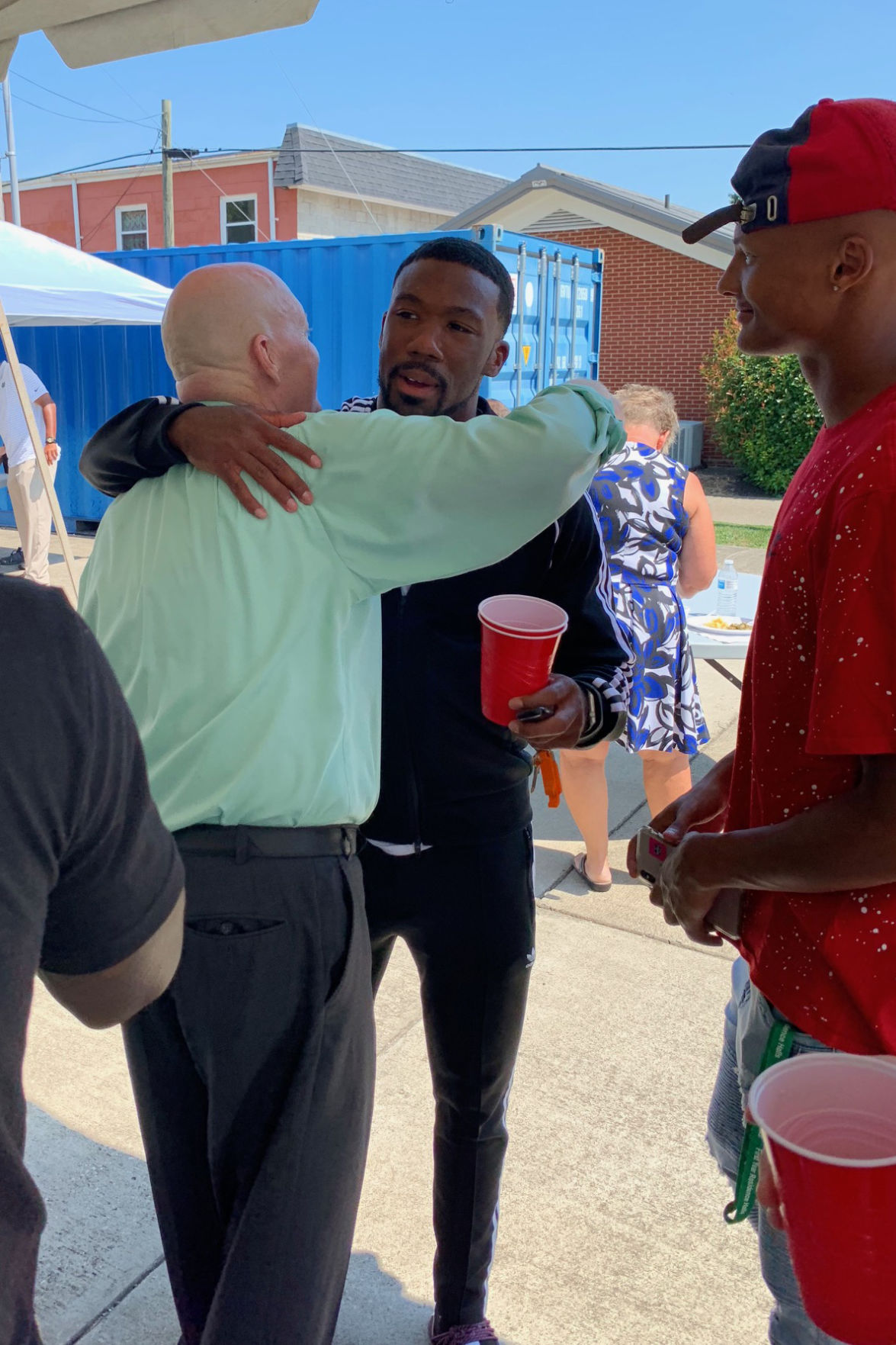 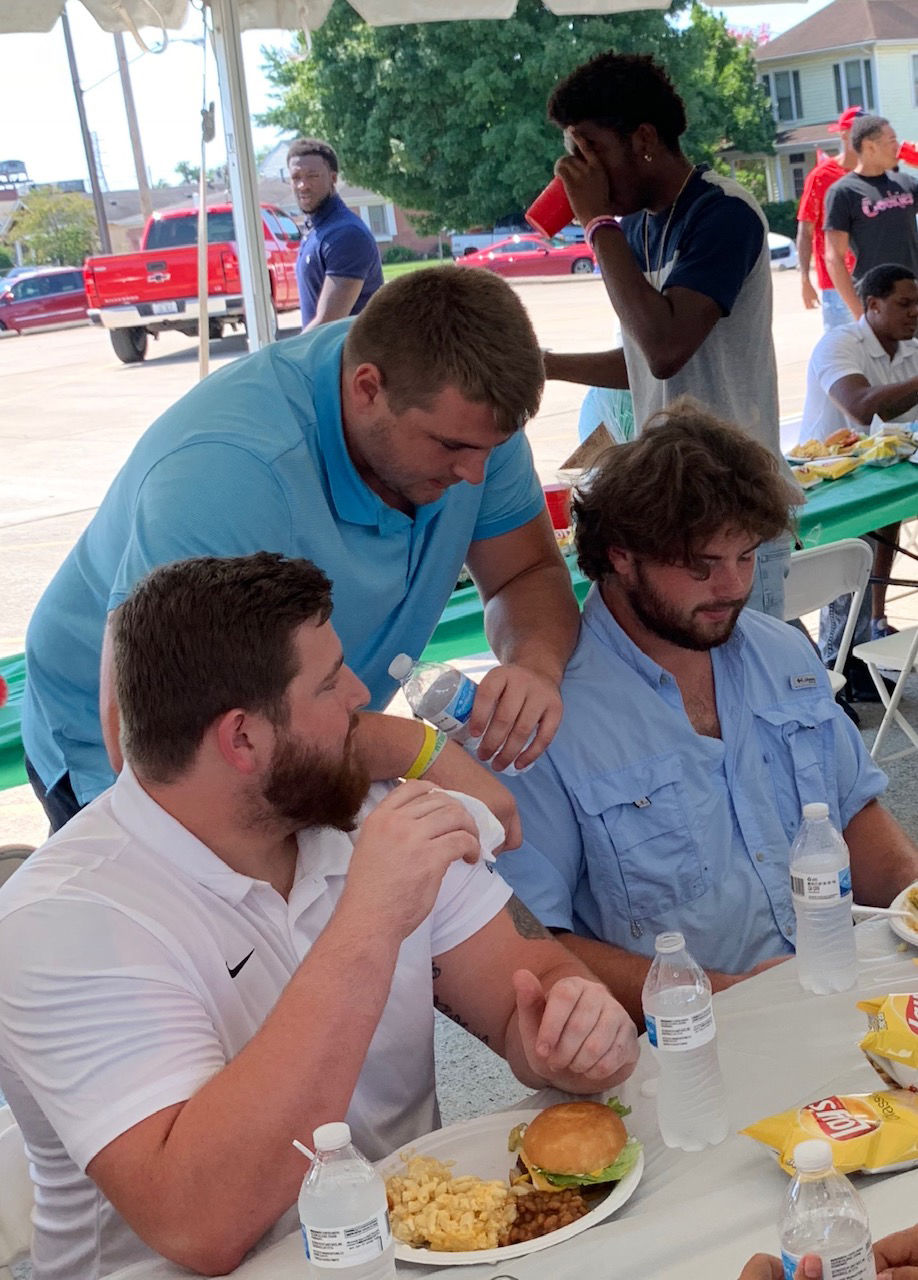 Marshall offensive linemen (from left) Levi Brown, Alex Mollette and Will Ulmer talk during a cookout at Sharon Baptist Church in Ironton, Ohio. Marshall team chaplain Steve Harvey is the pastor at Sharon Baptist and hosted the entire team on Sunday. 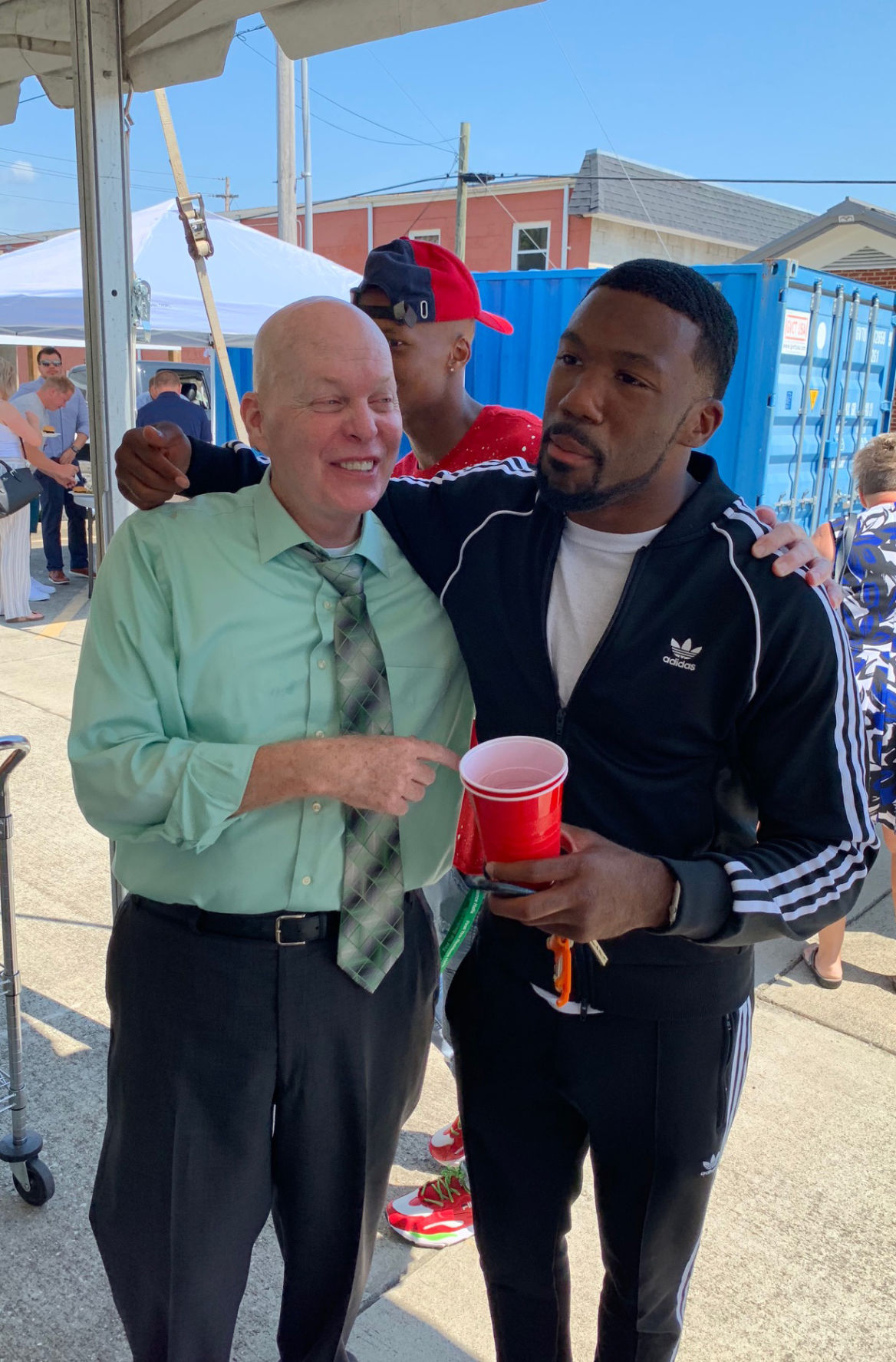 Marshall offensive linemen (from left) Levi Brown, Alex Mollette and Will Ulmer talk during a cookout at Sharon Baptist Church in Ironton, Ohio. Marshall team chaplain Steve Harvey is the pastor at Sharon Baptist and hosted the entire team on Sunday.

HUNTINGTON — On Sunday morning in Ironton, Ohio, Pastor Steve Harvey told the Sharon Baptist Church a story of how he used to be the youngest kid playing sandlot football and for years, "Coach Lou" only had him run one route.

Except for one thing. The ball never came Harvey's way.

"Okay. I got you, Lou," Harvey said back. "I'm going down to the store and drink me a pop and I'll be down in the end zone when you need me."

As laughter erupted in the congregation, Harvey spoke of how one day the ball did come his way off a scramble and he made the catch, which prompted more opportunities in the future. His continued faith that one day the ball would come helped him be consistent in effort and that effort led to the catch which built trust.

On this particular day, the message delivered at Sharon Baptist Church had about 125 additional guests in attendance to hear it as Marshall's football team made the 25-minute trip to Ironton to hear Harvey - who is also Marshall's team chaplain and known to the team as 'Rev' - speak to his congregation before a post-service cookout.

Messages such as the one delivered on Sunday are why players and coaches alike consider 'Rev' as one of the team's Most Valuable Players.

"He is the backbone of the team," Marshall longsnapper Matthew Beardall said. "He's always there for us - practices, games - and we can talk to him about anything - life and its ups and downs or football. He just means so much to the team."

One aspect that Beardall said stuck out with players was that 'Rev' is consistent and brings the same energy and enthusiasm into each day with the team.

"He brings the juice every day and he's always the same person," Beardall added. "He's always in a great mood and he brings people up. If you're in a bad mood, he can bring you up really quick."

The very consistency that Beardall spoke of when referencing Harvey is also the same message that Harvey delivered to his congregation on Sunday morning. The theme of his message was "Every Day is Gameday" with three reference points to drive home: All-In, All Out and All the Way.

"All-In" refers to being fully invested in what your purpose is while "All Out" is in reference to going all out and giving your best each day, which ties into Doc Holliday's message to the team of "Your Best You," which has also become a recent motto for the team. "All the Way" spoke about the different hurdles and adversities that life would bring, but perseverance is how to see success.

Those type of messages are why Holliday brings Harvey up before each practice to boost the team's energy level while also closing practice with a word from 'Rev' to ensure proper mindset after leaving the struggle of the battle on the field.

"The thing about Rev is that he is so genuine in everything he does," Marshall cornerbacks coach Mike Treier said. "There is no fake juice. There's no fakeness about him and everyone sees it - kids, coaches, trainers, strength staff. Everyone sees how genuine he is and how much he cares. When anyone is like that, it gives you a lot of energy."

Treier added that, especially during the difficulties associated with preseason camp, Harvey's presence is vital to the team's overall mental well-being, which includes players and coaches alike.

"We work a lot of hours and we're around the same people all day for long periods of time, so obviously we start to wear on each other at some point," Treier said. "When you see Rev walk in the building though, he's always smiling and always positive. That dude doesn't have a bad day, so that's huge for everybody in the building."

Following Harvey's talk, members of Sharon Baptist Church prepared a meal for players, who got to enjoy a day together away from the football complex - an aspect that Treier said he felt was important after a long camp.

Marshall returns to the practice field on Monday for the final few days of camp before shifting its focus to game preparation for its 2019 season-opener, which is a 6:30 p.m. kickoff against VMI on Aug. 31 at Joan C. Edwards Stadium.