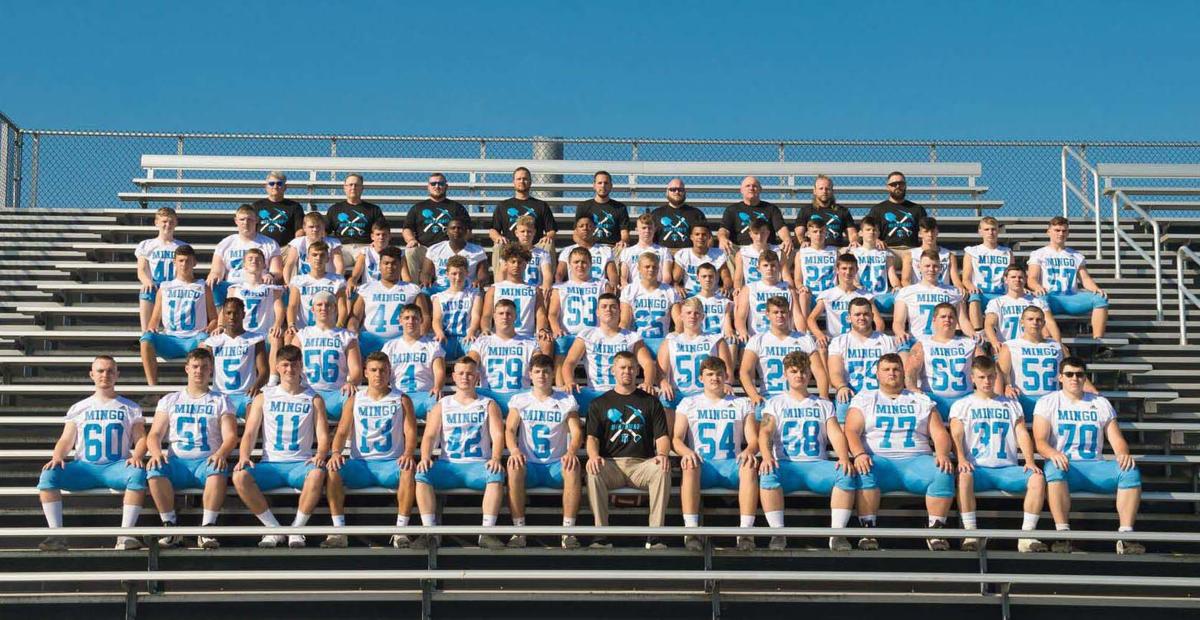 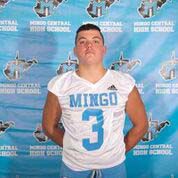 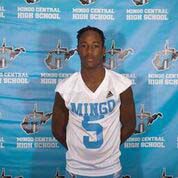 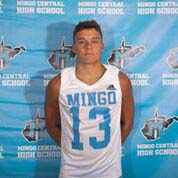 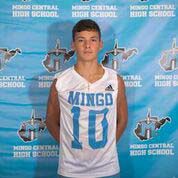 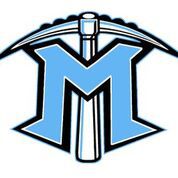 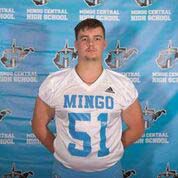 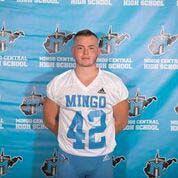 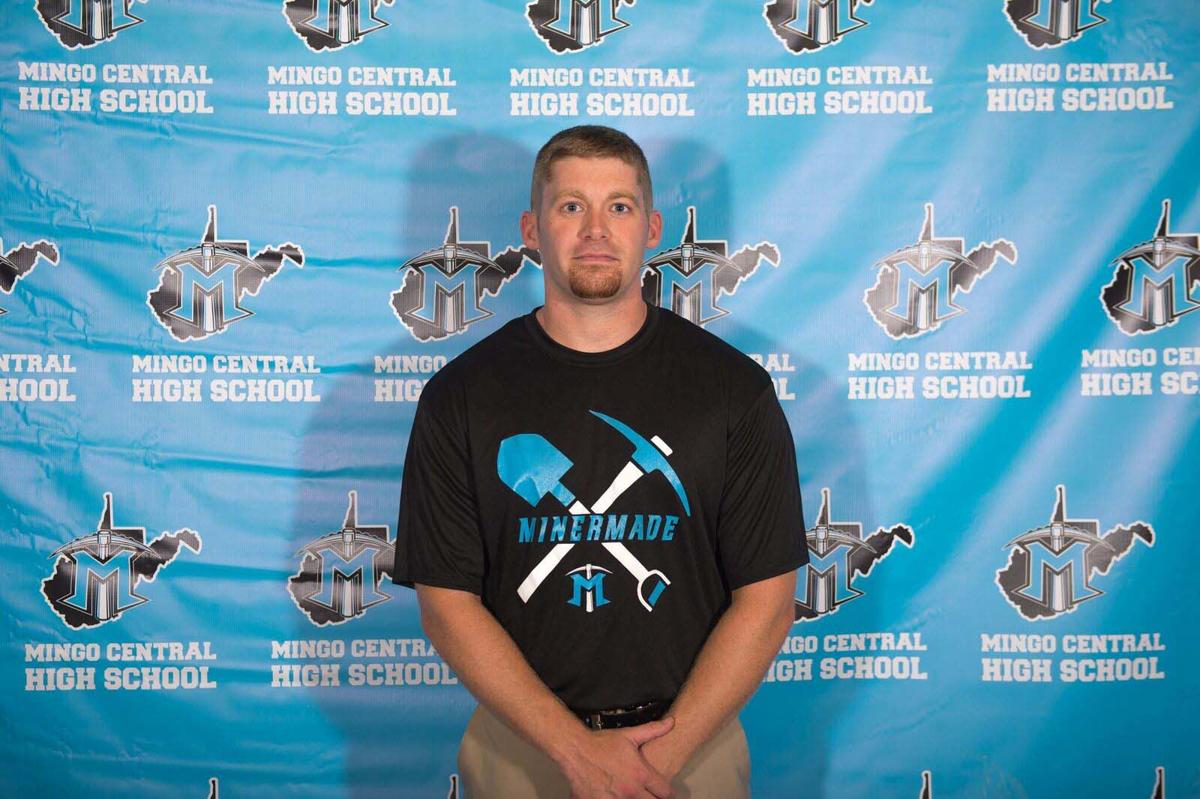 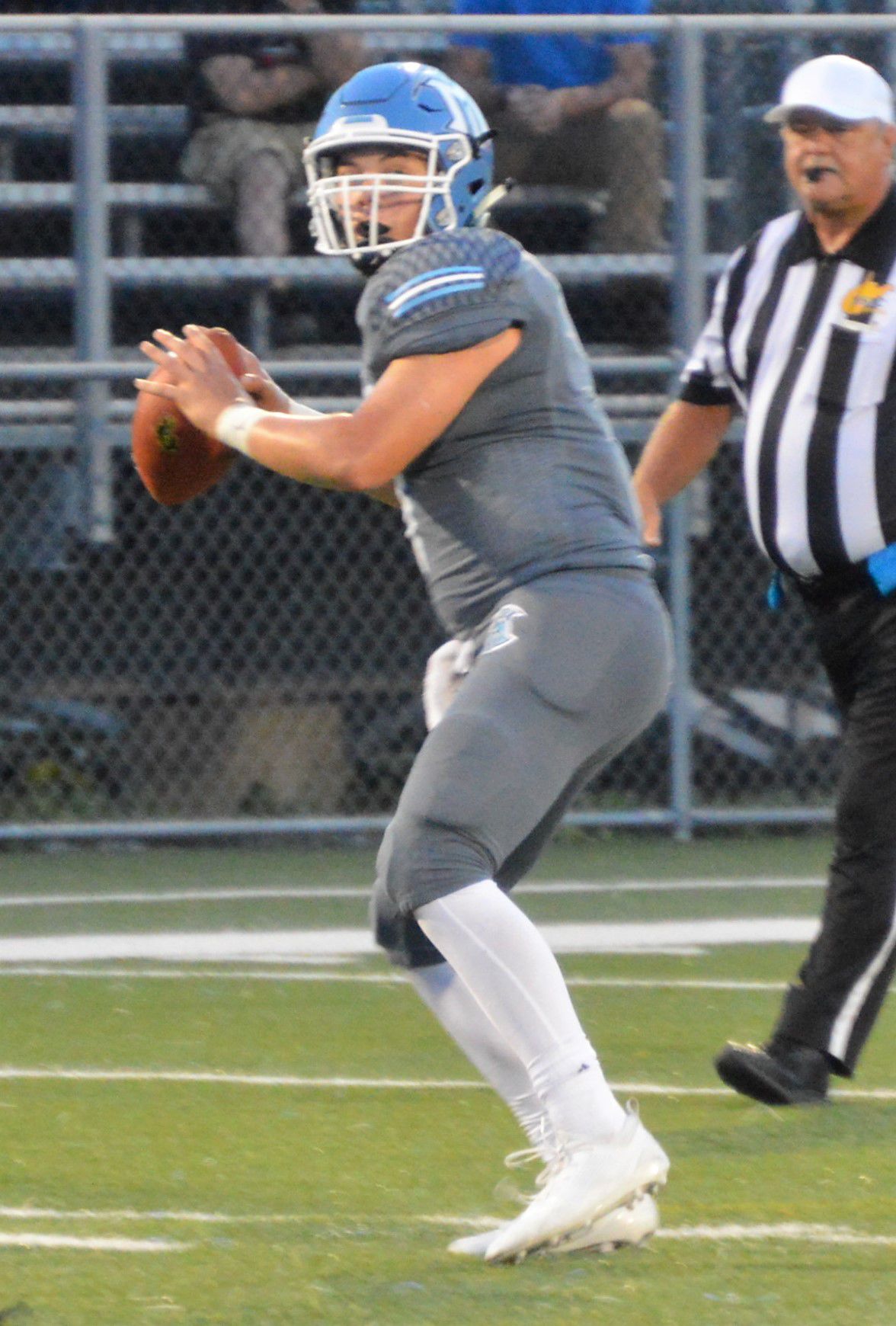 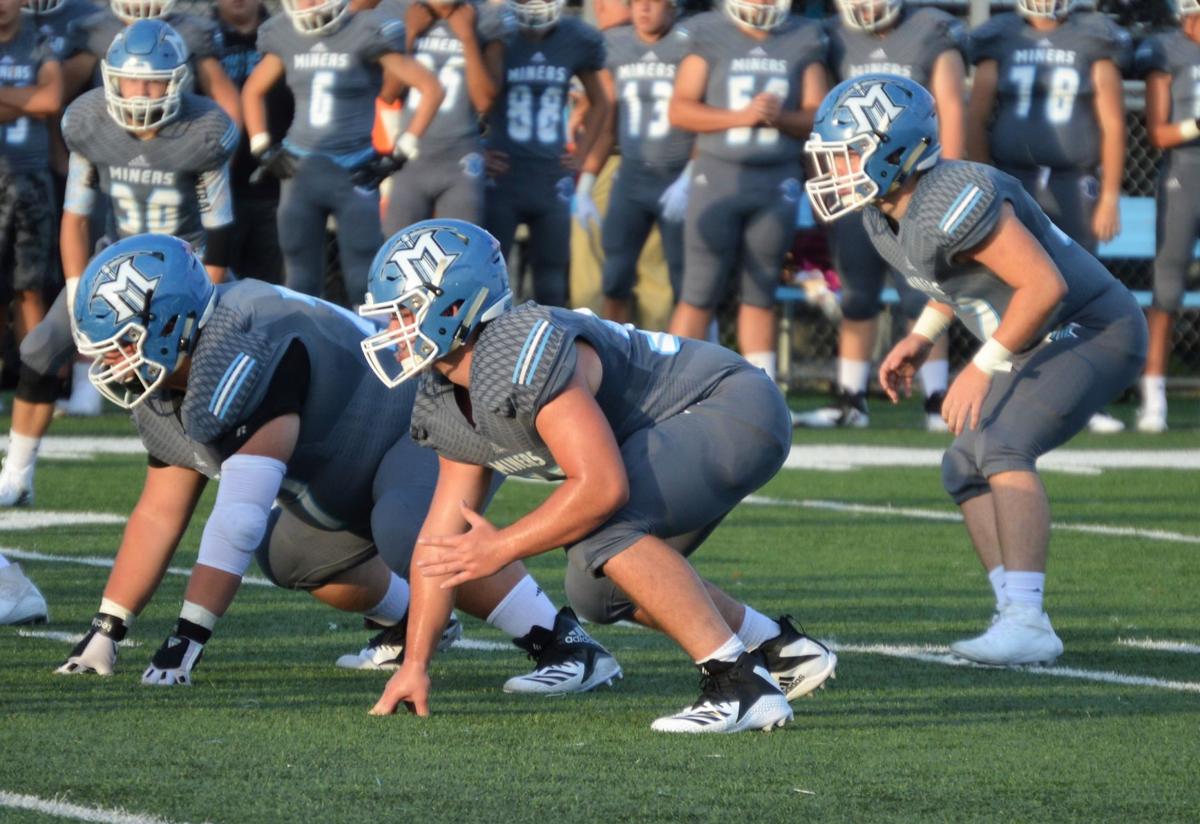 Jarrid McCormick/WDN Members of the front seven for the Mingo Central starting defense watch the ball prior to the snap in a game against Point Pleasant at "Buck" Harless Stadium on Friday August 24, 2018. 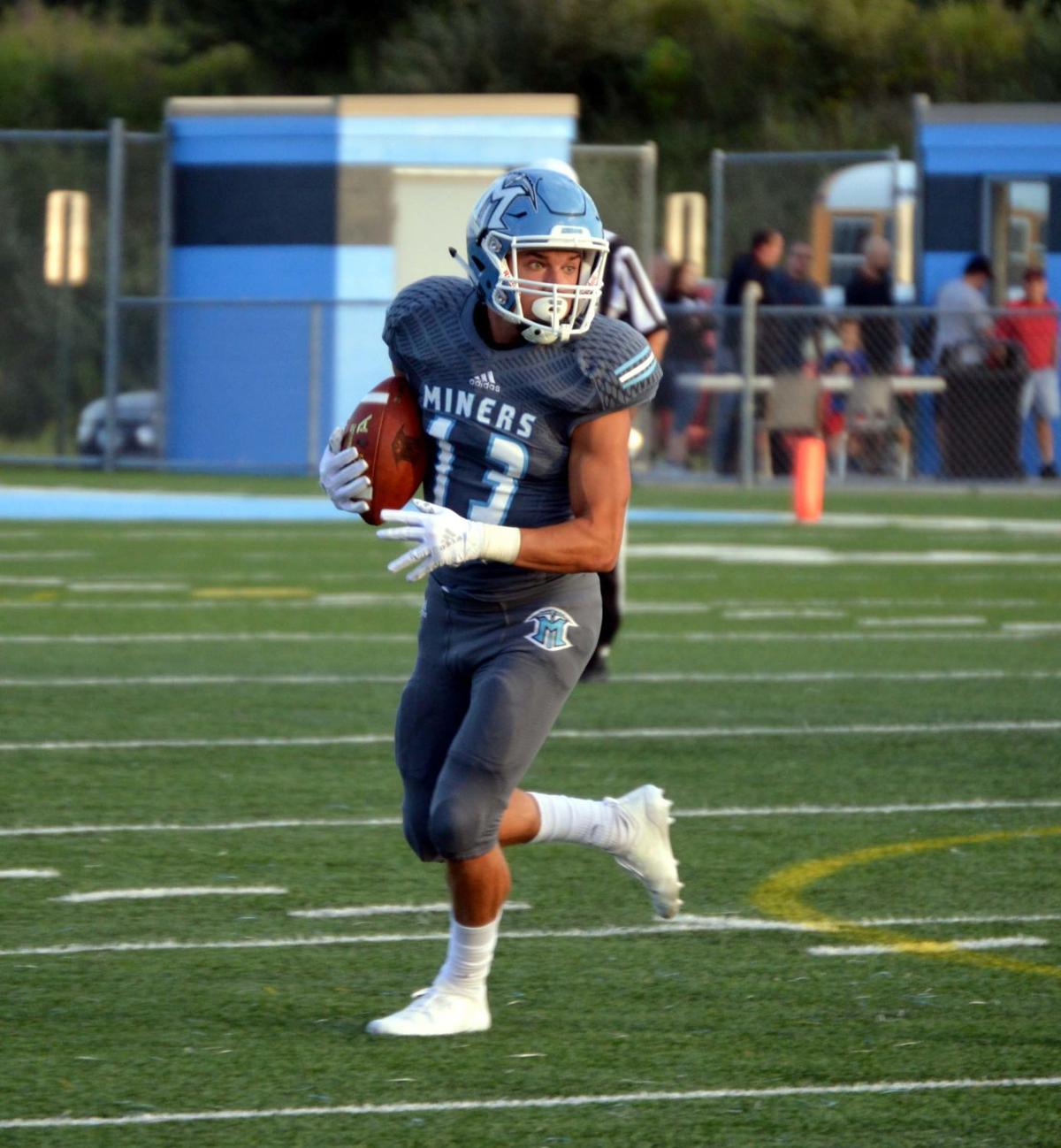 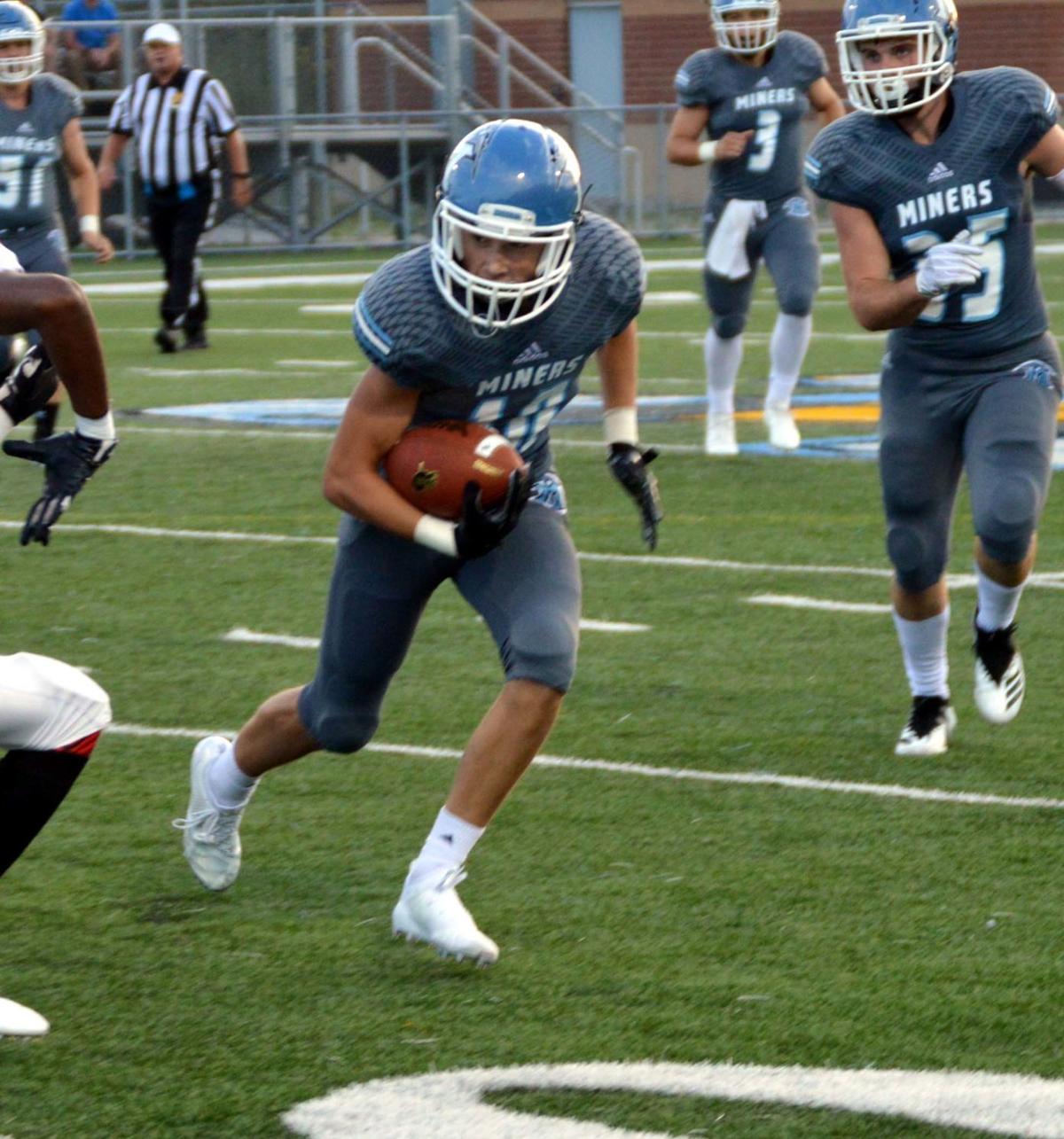 Jarrid McCormick/WDN Sophomore wideout Devin Hatfield is shown gaining yards after a catch for the Miners in a game on August 24, 2018 at "Buck" Harless Stadium. 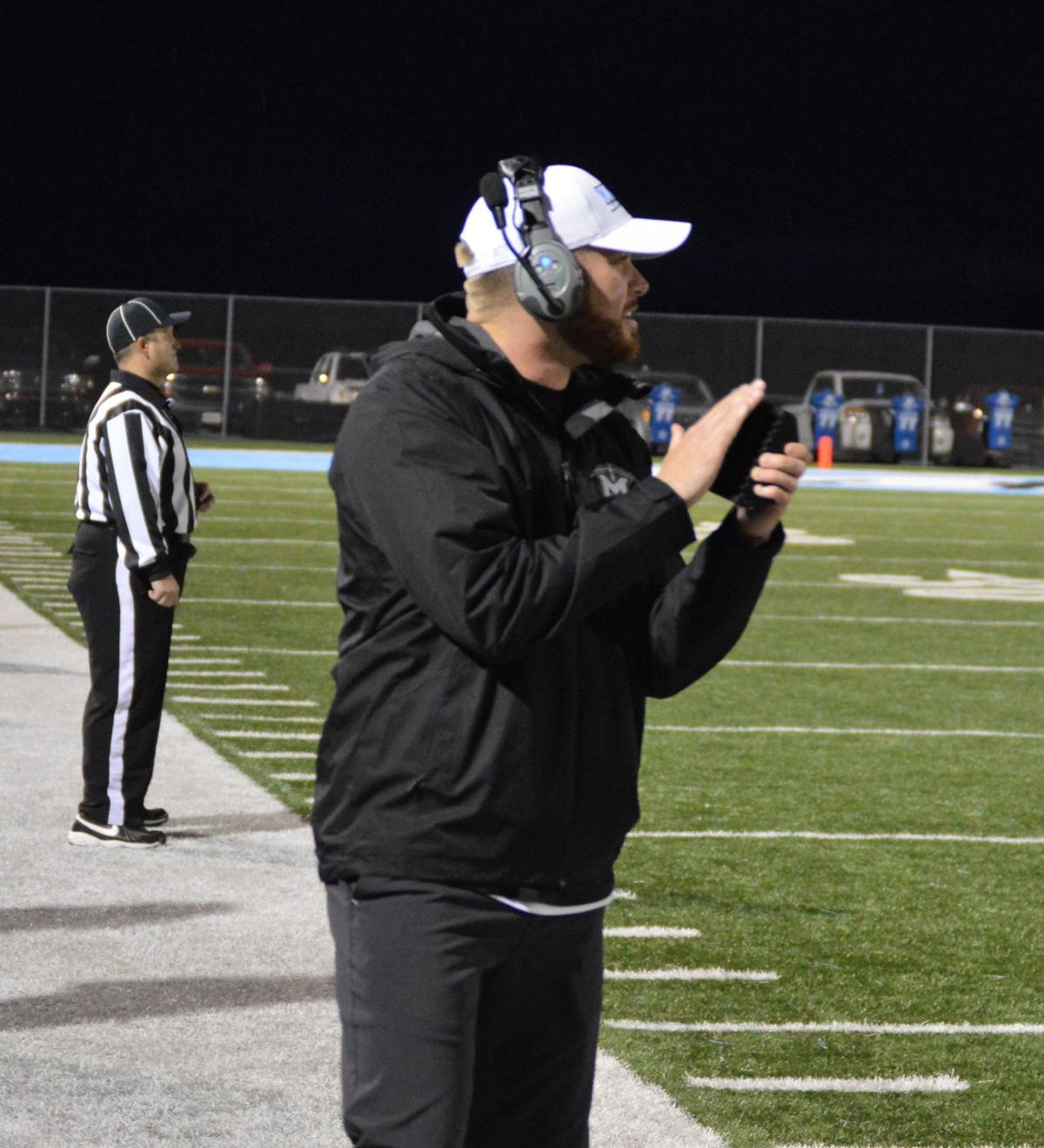 Jarrid McCormick/WDN Mingo Central coach Josh Sammons gets his team fired up prior to kickoff of the Miners 44-7 win over Chapmanville on Friday October 26, 2018 at James H. "Buck" Harless Stadium. 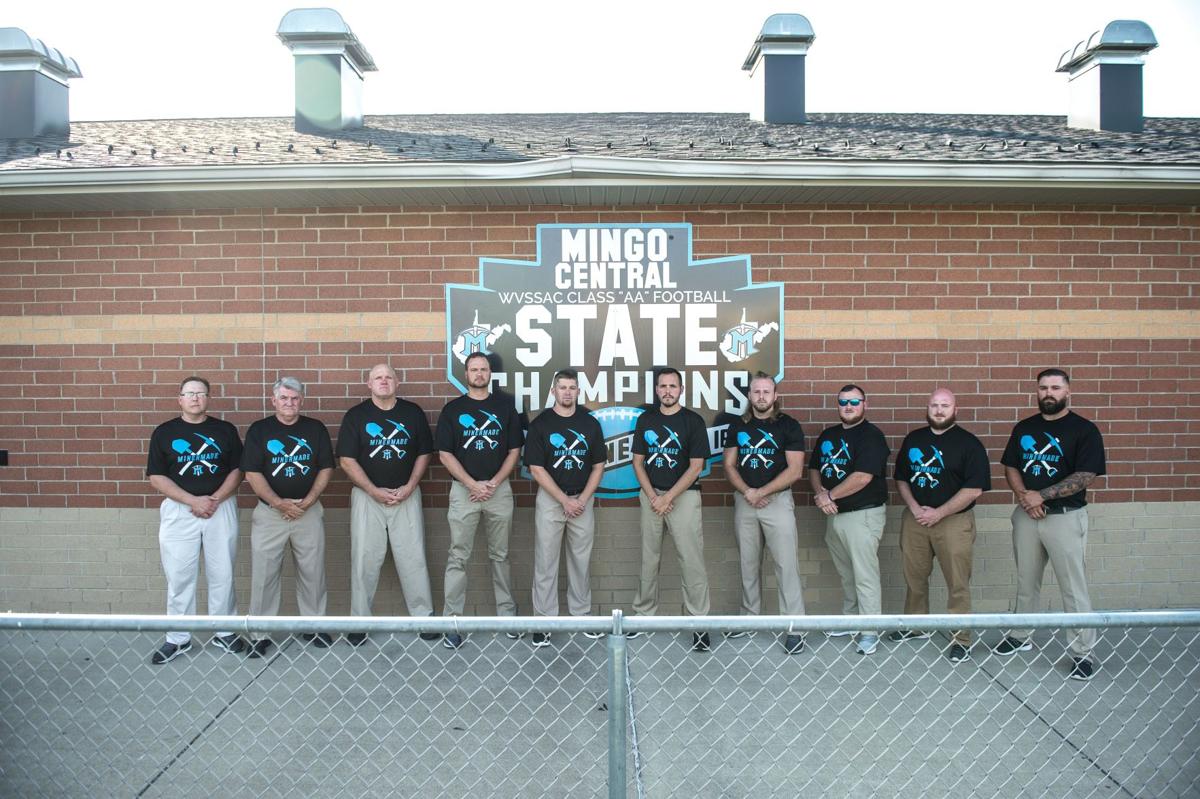 Jarrid McCormick/WDN Members of the front seven for the Mingo Central starting defense watch the ball prior to the snap in a game against Point Pleasant at "Buck" Harless Stadium on Friday August 24, 2018.

Jarrid McCormick/WDN Sophomore wideout Devin Hatfield is shown gaining yards after a catch for the Miners in a game on August 24, 2018 at "Buck" Harless Stadium.

Jarrid McCormick/WDN Mingo Central coach Josh Sammons gets his team fired up prior to kickoff of the Miners 44-7 win over Chapmanville on Friday October 26, 2018 at James H. "Buck" Harless Stadium.

RED JACKET — Expectations will be a little different heading into the 2019 campaign for Mingo Central compared to a year ago when they entered the first year of the Josh Sammons Era with multiple new starters on both sides of the ball.

Now, heading into the second season of the Sammons era on Miner Mountain, Mingo Central returns at least eight starters on both sides of the ball off a team that finished 8-3 in 2018 and ranked No. 10 in the final WV MetroNews Power Rankings.

"We have good numbers this year, depth wise. We got a lot of guys back that played for us last year, and then we got some new faces," coach Sammons said. "Building off what we did last year I think we should be able to improve from where we finished. We are really looking forward to getting this season started and seeing what we can do."

The Miners will have back what could arguably be the top quarterback wide receiver/ quarterback duo in the entire state in senior Drew Hatfield and junior Daylin "Day Day" Goad, both of who were named Charleston Gazette-Mail Preseason First team All-State, which covers all three classes.

Goad took the state by storm in his first season as a starter for the Central as he never missed a beat replacing 2016 Kennedy Award winner Jeremy Dillon and leading his team to an 8-2 mark in the regular season and averaging 45 points per game.

"Day Day," as he is known on Miner Mountain, stepped right in and did better than anybody ever could have expected as he threw for 3,266 yards on the season and an astounding 46 touchdowns in only 11 games.

For comparisons sake, 2018 Kennedy Award winner Connor Neal finished tied with Goad to lead the state with 46 touchdown passes, but he needed three more games than Goad to reach those numbers.

The Second Team AP All-State QB from a year ago was also a threat on the ground as he led Mingo Central with 10 rushing touchdowns and 527 rushing yards, to give him 56 total touchdowns and 3,793 total yards of offense on the season.

Goad's favorite target in his first year under center was Hatfield, as the two created the most deadly combination in all of Class AA. He was named First Team All-State fort the second straight season a year ago, and led the state in nearly every receiving category.

Drew hauled in 84 passes during his junior year for 1,389 yards and 21 touchdowns through the air. He was nearly voted as the top receiver in the state of West Virginia, but lost out on the Randy Moss Award to University's Evan Parrow.

He finished with 25 total touchdowns as he added three more on the ground and had a 75-yard kick return in the final game at Point Pleasant.

For his career, Drew has put up astounding numbers on the gridiron hauling in 217 career catches for 3,256 yards and 44 touchdowns in only three seasons. He has amassed well over 4,000 all-purpose yards in his career.

"I can't say what it means having two guys like Drew and Day Day you can lean on, I mean those guys are just two studs and make my job a lot easier on Friday nights," Sammons said of his prolific duo.

Also back on the outside is Devin Hatfield, the younger brother of Drew, who had a big impact during his freshman campaign finishing with 49 catches for 794 yards and seven touchdowns on his way to being named Honorable Mention All-State.

He along with junior Isa Scales, who caught 16 passes for 223 yards and three touchdowns a season ago, are both expected to see plenty of action at the wide out positions.

In the backfield, the Miners are going to have to replace leading rusher and Honorable Mention All-State running back Dougie Dillon who would have been a senior this season, but was ruled academically ineligible.

According to coach Sammons, the Miners will use a trio of guys in the backfield this year to form a "running back by committee" as junior Zach Patrick, freshman Kaeden Bolding, and first year senior Tanner Cisco are all expected to see carries.

The Mingo Central coaching staff will also have back four out of five starting offensive linemen from a season ago in Jacob Lester, Eli Jones, Scott Collins, and Branson Nagy. They also picked up transfer Chase Smith from Tug Valley who figures to fit into the rotation up front.

"Our offense is all numbers and getting our athletes the ball out in space but we also want to have a physical run game between the tackles," said offensive coordinator and former head coach Joey Fields. "It all starts out with what can your quarterback do and what can your offensive line do and the rest is really just chess pieces. Right now we got a good quarterback and a hard working offensive line so that's huge for us."

Fields, who was the head coach of the Miners in 2017 and led them to a 12-0 start before they fell in the Class AA semifinals to Fairmont Senior, left to coach at Class AAA State Champion Martinsburg last season but returned home to Mingo Central this spring.

Defensively the Miners will need to make improvements after giving up over 29 points a game on that side of the ball in 2018. They will be led on that side of the ball by senior linebackers Westan Christian and Ryan DeBoard as well as senior Levi Davis and Belfry transfer Jacoby Thornsbury up front. Thornsbury had 20 tackles last season as a freshman while Smith had 71 tackles and an interception for Tug Valley and is also expected to have an impact defensively.

The Miners are 38-5 in Cardinal Conference games since they joined the league in 2015 and have won at least a share of the last three conference titles.

While the 2016 Class AA State Champions know that expectations will be high in 2019, as they are expected to be a preseason top five team, the coaching staff instills in the players to take it one game at a time and just focus on the task at hand.

"We have had so many successful seasons in the past that I think it has gotten to a level now with our expectations that if you don't go 10-0, or you don't win a state championship then it's almost a failure, and I bought into that the year I was head coach" said Fields. "We went 10-0 that year, won 12 games but lost in the semis and I felt that was a failure. I had a hard time dealing with that at the time.

"Now after some growth I've realized that in football it's a grind. If we go 9-1 or 8-2, those are still successful seasons. You have to take everything one day at a time. Take care of today and then worry about tomorrow laterI've been trying to instill that in these guys. We need to concentrate on getting better every week and how good can we be when November starts, and that's always been our goal."

Mingo Central will open the season up on the road against Pikeville, the Class A runner-up in Kentucky, in the Pike County Bowl on Saturday August 31, and will then play the remainder of their schedule against Cardinal Conference opponents.

"It's going to be a good atmosphere for these kids, they know it's going to be a big game. Pikeville has some big expectations this year and so do we," coach Sammons said of their week one contest. "It'll be a huge crowd, I'm excited for these kids. It's the first Pike County Bowl any of us have ever played in. We're looking forward to it and we're just going to go over there have fun and try get a win."