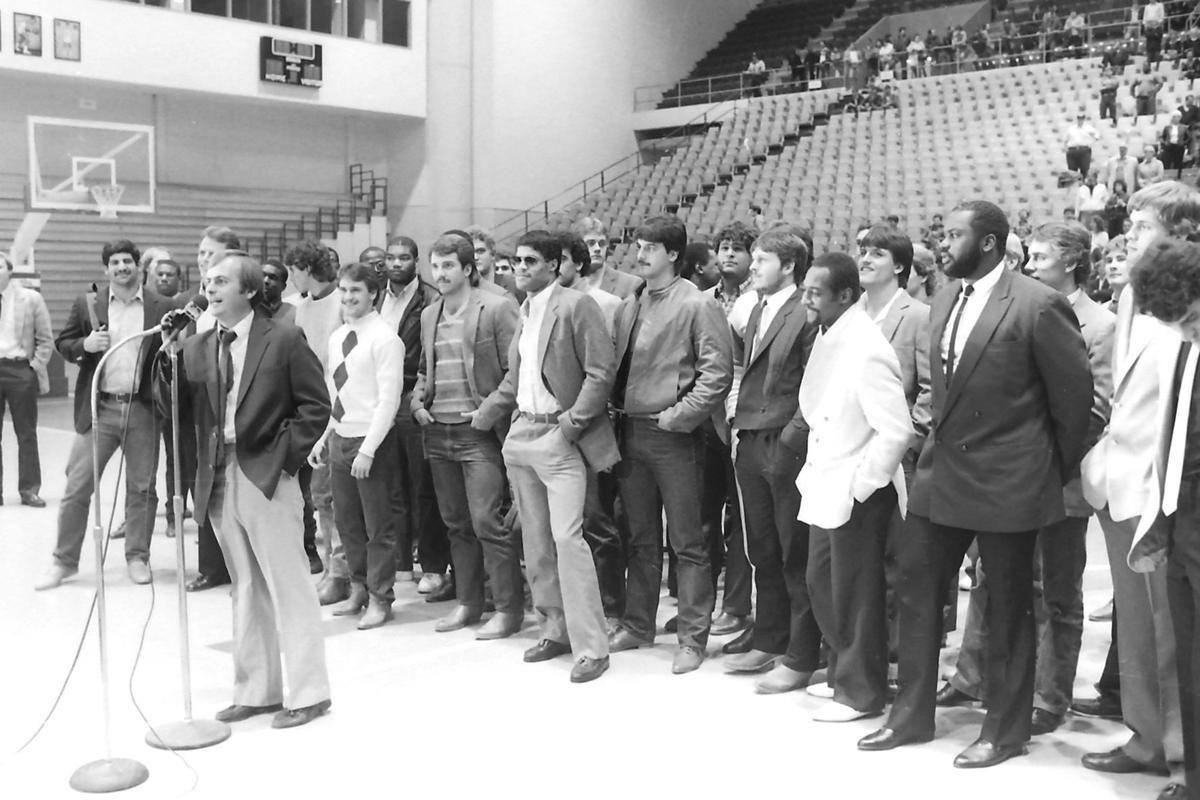 Marshall head coach Stan Parrish, at microphone, and the Thundering Herd football team receive a warm welcome from fans at the Cam Henderson Center on Nov. 18, 1984, in Huntington. The previous day, Marshall defeated East Tennessee State for its first winning season since 1964. 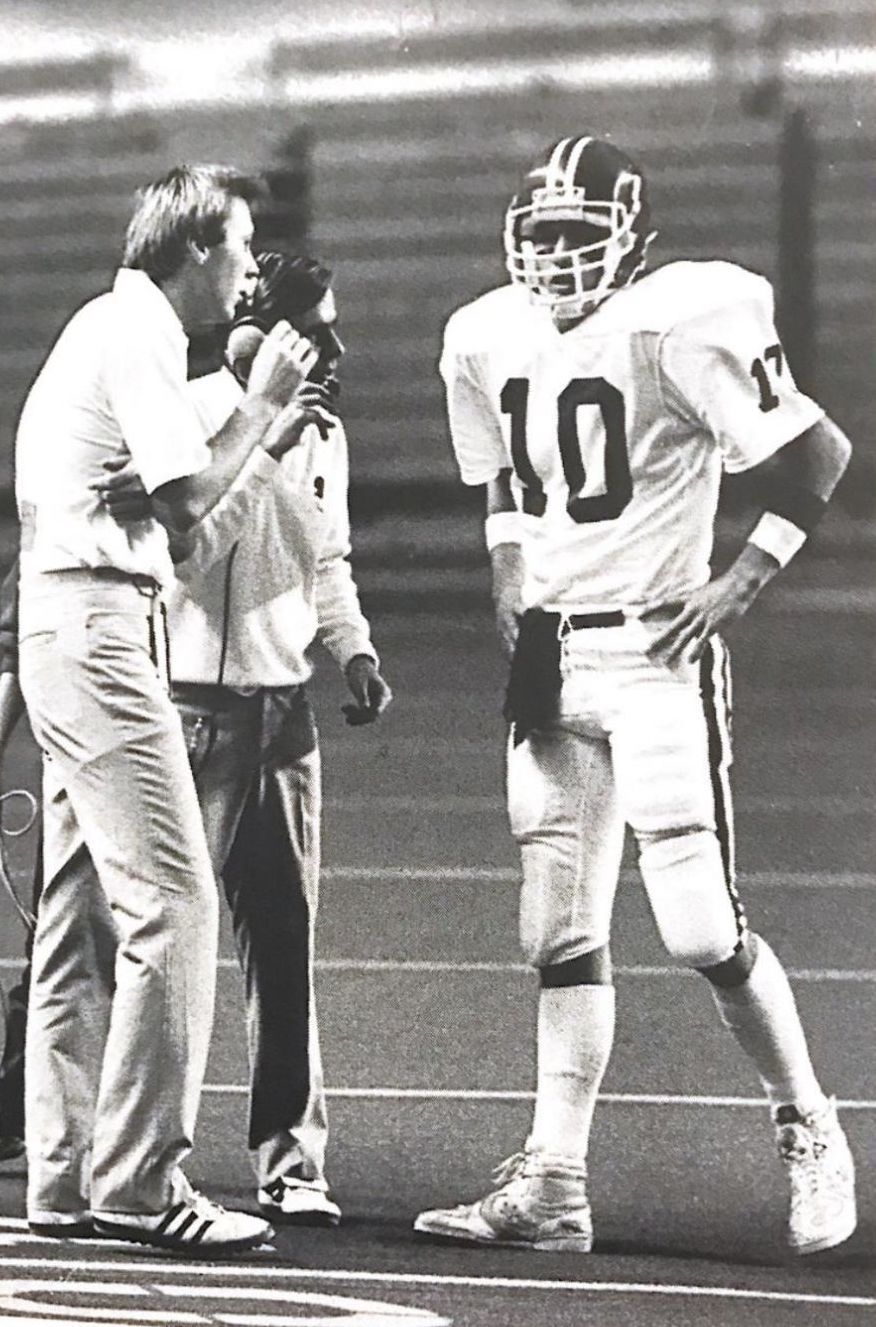 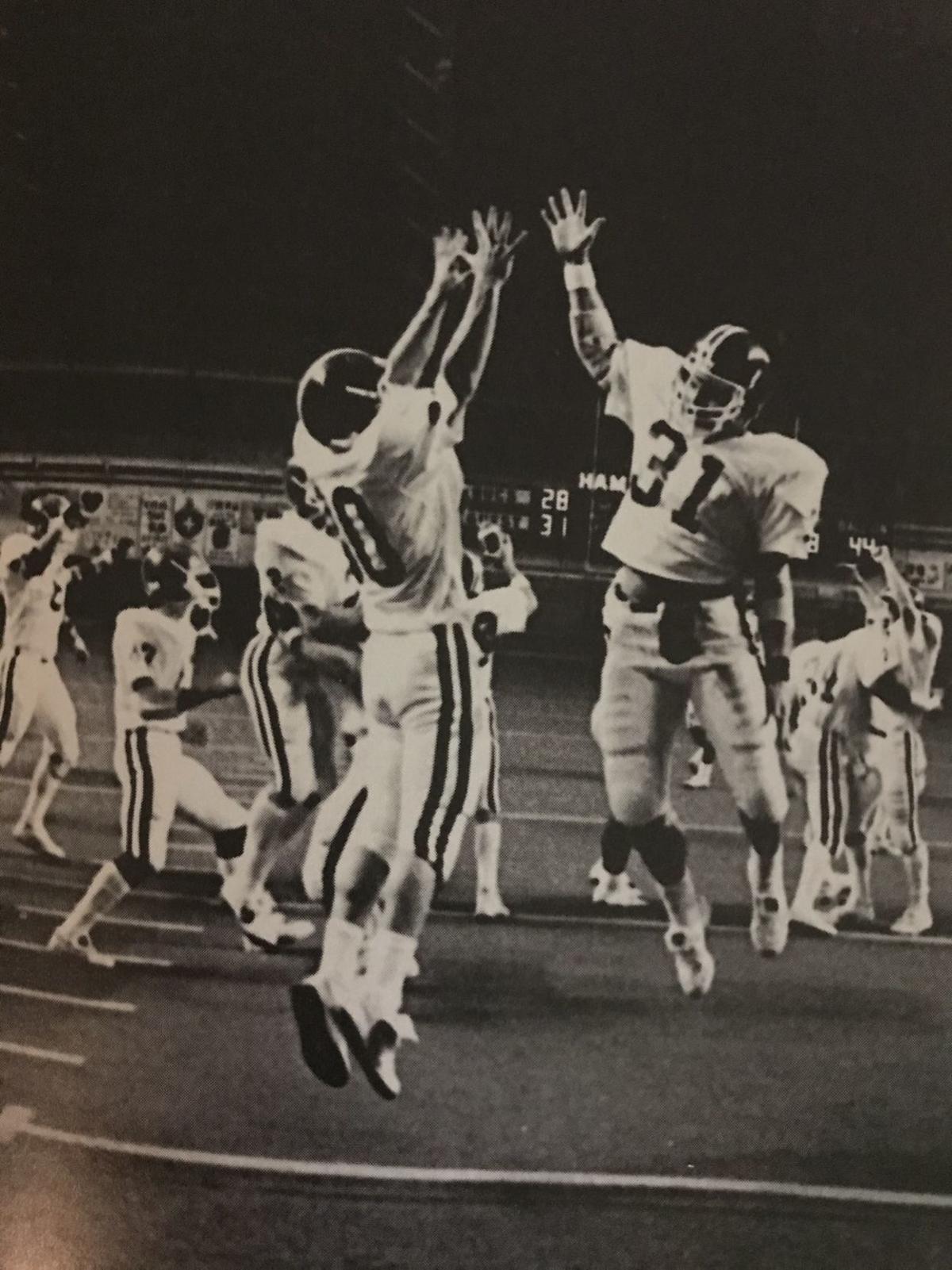 Marshall University running back Don Johnson (31) and offensive lineman Mike Birurakis high-five one another as the Thundering Herd celebrates its 31-28 victory at East Tennessee State on Nov. 17, 1984.

Marshall head coach Stan Parrish, at microphone, and the Thundering Herd football team receive a warm welcome from fans at the Cam Henderson Center on Nov. 18, 1984, in Huntington. The previous day, Marshall defeated East Tennessee State for its first winning season since 1964.

Marshall University running back Don Johnson (31) and offensive lineman Mike Birurakis high-five one another as the Thundering Herd celebrates its 31-28 victory at East Tennessee State on Nov. 17, 1984.

EDITOR’S NOTE: Younger fans might have trouble imagining a time when a winning season was a monumental accomplishment for Marshall University football.

In 1984, however, it was. The Thundering Herd defeated East Tennessee State 31-28 on Nov. 17 to clinch its first winning season since 1964. The triumph sparked a massive celebration among Herd players, coaches and more than 2,500 fans in Johnson City, Tennessee, as well as in Huntington where people took to the streets in revelry.

Here is a recap of that game:

JOHNSON CITY, Tenn. — The monkey has been thrown off.

Marshall University football (6-5) is a winner, having defeated East Tennessee State 31-28 in the Mini-Dome to finish 6-5 and achieve its first winning season since 1964. The longest streak of losing seasons in the country now belongs to Columbia.

“All you had to do was look in that locker room,” Thundering Herd head coach Stan Parrish said. “That was all the story you needed. It told it all. No questions. No words. Just look at those kids. They had 20 years’ worth of teams and players in there with them. I’ll remember that scene as long as I live. I don’t think I’ll ever be a part of something that meant so much to so many people.”

Marshall’s victory didn’t come without drama. The Herd led 31-21, but the Buccaneers (6-5) pulled within a field goal when running back Jerry Butler scored on a 9-yard run with 5:23 left. ETSU then stopped the Herd and forced a punt, taking over deep in its own territory with 3:41 to play.

Marshall’s defense rose, giving up merely two yards in three plays and the Bucs sent All-American punter George Cimadevilla on. East Tennessee, though, faked the kick and Cimadevilla threw a pass to tight end Tom Dodd for a 17-yard gain and a first down.

The Bucs gained three yards on first down before ETSU quarterback Robbie White followed by hitting Butler with a swing pass and the talented tailback weaved his way through would-be tacklers and appeared on his way to a big gain. That’s when the Herd received a break 20 years in the making. Marshall linebacker Tony Lellie, however, stuck Butler cutting back inside, causing a fumble. The ball rolled free for what felt like five minutes, but was closer to five seconds, before cornerback Leon Simms recovered it at the Bucs’ 49.

Just 1:29 remained, but East Tennessee State owned two timeouts, meaning Marshall needed a first down to run out the clock and secure the victory. Randy Clarkson ran for two and eight yards to pick up that first down. Quarterback Carl Fodor kneeled twice and the Herd had its streak-busting victory.

Fodor struck again, throwing a 7-yard touchdown pass to tight end Tim Lewis to make it 14-7, but White hit Mark Neely with a 6-yard scoring strike 22 seconds before halftime to send the teams to the locker room tied.

White, who completed 20 of 43 passes for 234 yards, bedeviled the Herd again, throwing a 72-yard bomb to Mark Murphy for a touchdown at 10:40 of the third quarter. Herd fans wondered if they were destined to once again wait until next year.

Marshall boosters received a bit of hope on the Herd’s next possession as Scott LaTulipe kicked a 44-yard field goal to make it 21-17.

The Herd defense stopped ETSU, but Cimadevilla dropped a punt inside the Marshall 1. Clarkson gained seven yards and Robert Surratt five to the 13. Marshall then came up with its longest play of the season, as off a play-action fake Fodor threw a post pattern to split end Brian Swisher for an 87-yard touchdown to give the Herd a lead it never relinquished.

On the previous play, Surratt’s carry, Marshall’s coaches noticed a vulnerability in the Bucs’ defense. On the next play, they moved Swisher outside to split end and Billy Hynus inside to flanker.

“The coaches figured it would be so wide open they wanted to have every chance we’d score,” said Hynus, a former Huntington East standout who was an outstanding pass catcher even though he never scored a touchdown in college.

As the final second ticked off the clock, the Herd celebrated on the field as if it had won the Rose Bowl. Its fans, tears streaming down many faces, did the same in the stands. Marshall was a winner.

Win over Illinois State was as important as defeat of ETSU