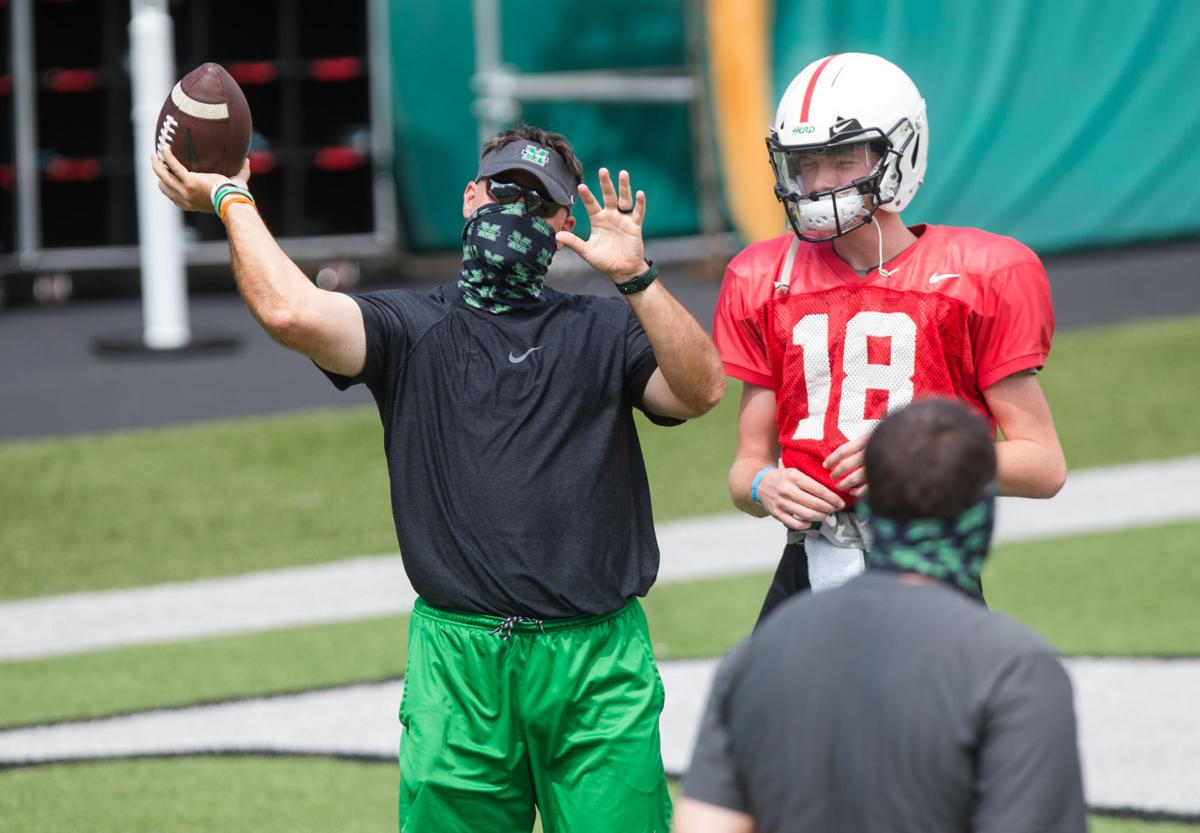 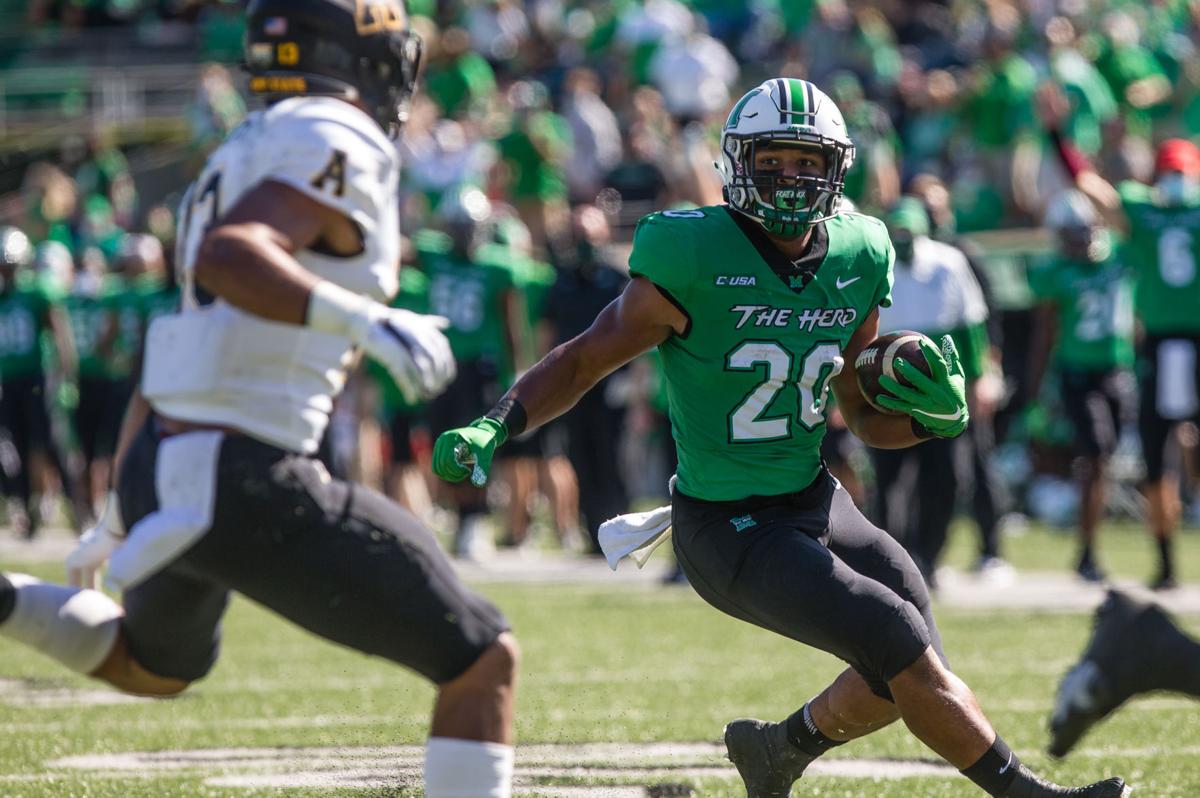 Marshall running back Brenden Knox (20) attempts to juke past Appalachian State defender Kaiden Smith, left, as he rushes upfield on a carry during an NCAA football game on Saturday at Joan C. Edwards Stadium in Huntington, W.Va. 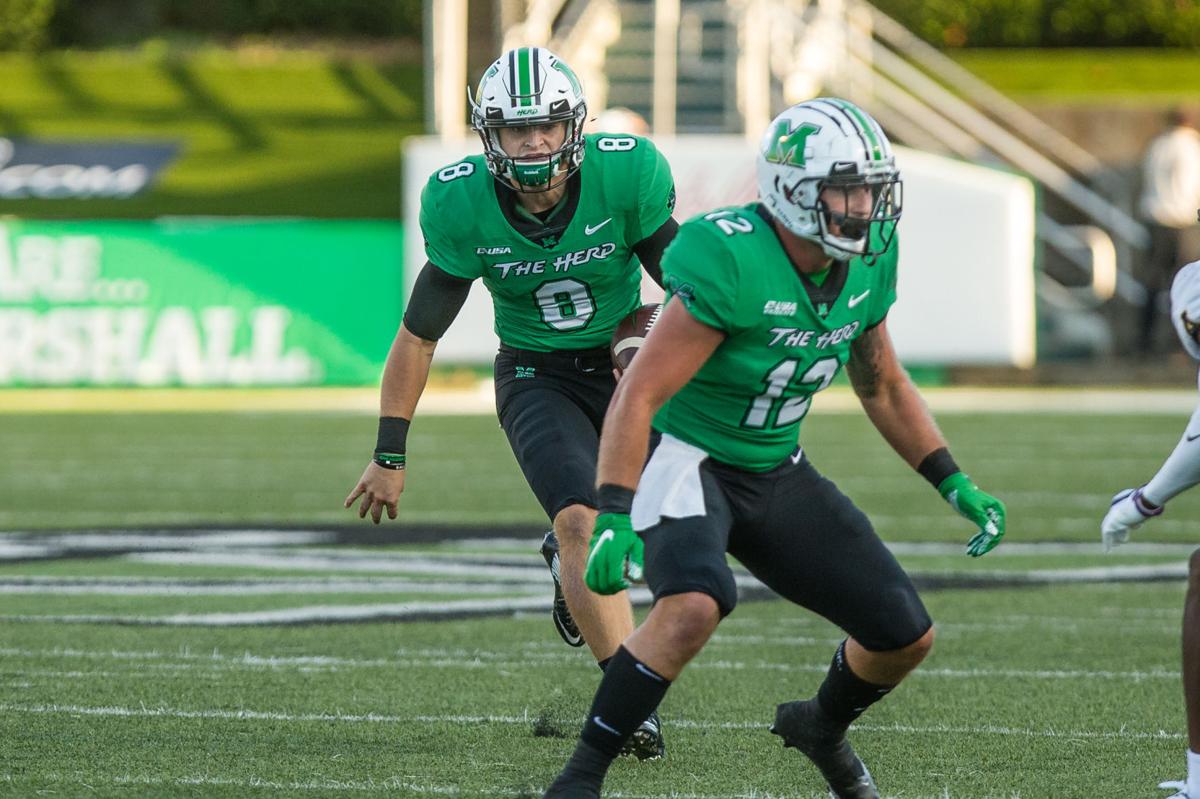 Sholten Singer/The Herald-Dispatch Marshall quarterback Grant Wells (8) rushes up field on a keeper as the Herd takes on Appalachian State during an NCAA football game on Saturday, Sept. 19, 2020, at Joan C. Edwards Stadium in Huntington, W.Va.

Marshall running back Brenden Knox (20) attempts to juke past Appalachian State defender Kaiden Smith, left, as he rushes upfield on a carry during an NCAA football game on Saturday at Joan C. Edwards Stadium in Huntington, W.Va.

Sholten Singer/The Herald-Dispatch Marshall quarterback Grant Wells (8) rushes up field on a keeper as the Herd takes on Appalachian State during an NCAA football game on Saturday, Sept. 19, 2020, at Joan C. Edwards Stadium in Huntington, W.Va.

HUNTINGTON — Through three games, Marshall’s offensive line has been an imposing force on the field, which has led to the team’s 3-0 start and an offense that is averaging nearly 40 points per game.

Marshall offensive coordinator Tim Cramsey said he isn’t a statistical guy, but the numbers are hard to ignore.

“Right now, the first three games, they’ve been outstanding,” Cramsey said. “I’m not a big stats guy, but we’ve taken three sacks and we have just one negative play on the year in the run game. That’s all a tribute to them up front.”

As Marshall looks to move to 4-0 and secure a big cross-divisional Conference USA win at Louisiana Tech on Saturday, it will again be the offensive front that will be called on to push the Herd to the top in the 6 p.m. matchup at Joe Aillet Stadium in Ruston, Louisiana.

Marshall is going up against the biggest and most physically imposing front that they’ve seen this season, but that seems to suit running back Brenden Knox just fine with the trust he has for those in front of him.

Marshall quarterback Grant Wells said that the imposing presence on the field starts with their work in film study and meeting rooms.

“I’ve sat in on a couple meetings of theirs and it’s quite intimidating,” Wells said. “Each guy takes their job very seriously and they critique others. Each guy learns off another and I truly believe each guy could play all five positions.”

Marshall center Alex Salguero is the relative newcomer to the group in terms of experience, but Salguero also has been in the program for five years and makes the calls for the offensive line.

Salguero said the Herd’s diligence in film study and on the practice field is showing up in games.

He also laughed when told of Knox’s reference to the group being ‘nasty.’

“The old saying ‘Hard work pays off’, you can definitely see it on film,” Salguero said. “It’s rewarding to see the final outcome as good as it has been so far, but we’ve got a long season left and we’ve got to make sure when we’re at practice this week, we can capitalize on it every single weekend.”

Last week’s challenge was getting past a veteran Western Kentucky defense with many starters returning, including the Conference USA Defensive Player of the Year in defensive end DeAngelo Malone.

Marshall’s offensive line passed that test, leading 38-0 in the middle of the third quarter.

This week, the unit takes on a Louisiana Tech squad that features one of the league’s top interior linemen in defensive tackle Milton Williams, who has five tackles for loss and three sacks to his credit this season.

“Last year, Coach Adkins told us he was going to be a good player in this league, and from what I can see now, he’s performing to the best of his ability,” Salguero said. “We definitely have to be keying on to him.”

In addition to that challenge, Salguero and the Herd will face a defense that incorporates multiple looks in its scheme, switching from Odd, Even and also Bear fronts along the line.

It will be on Salguero to recognize the front and get the proper blocking alignment while the entire offensive front will be called on to execute against a big, but largely inexperienced defense that is starting to gain its traction after a win over UTEP, according to head coach Skip Holtz.

“Defensively, we gave up 10 points in that football game,” Holtz said. “I thought they played really well. They played fundamental, smart football. It wasn’t as much about making plays as much as it was about 11 guys playing together.”

While the Louisiana Tech defense is starting to find itself, Marshall’s offensive line has been together for a long time and has continued a run of success that has built over years.

For that reason, Wells — one of only a couple of newcomers to the offense — said his full confidence is in the unit to perform well again this week.

“I truly believe that you could put any D-line out there and we would put up a pretty good fight against them,” Wells said.