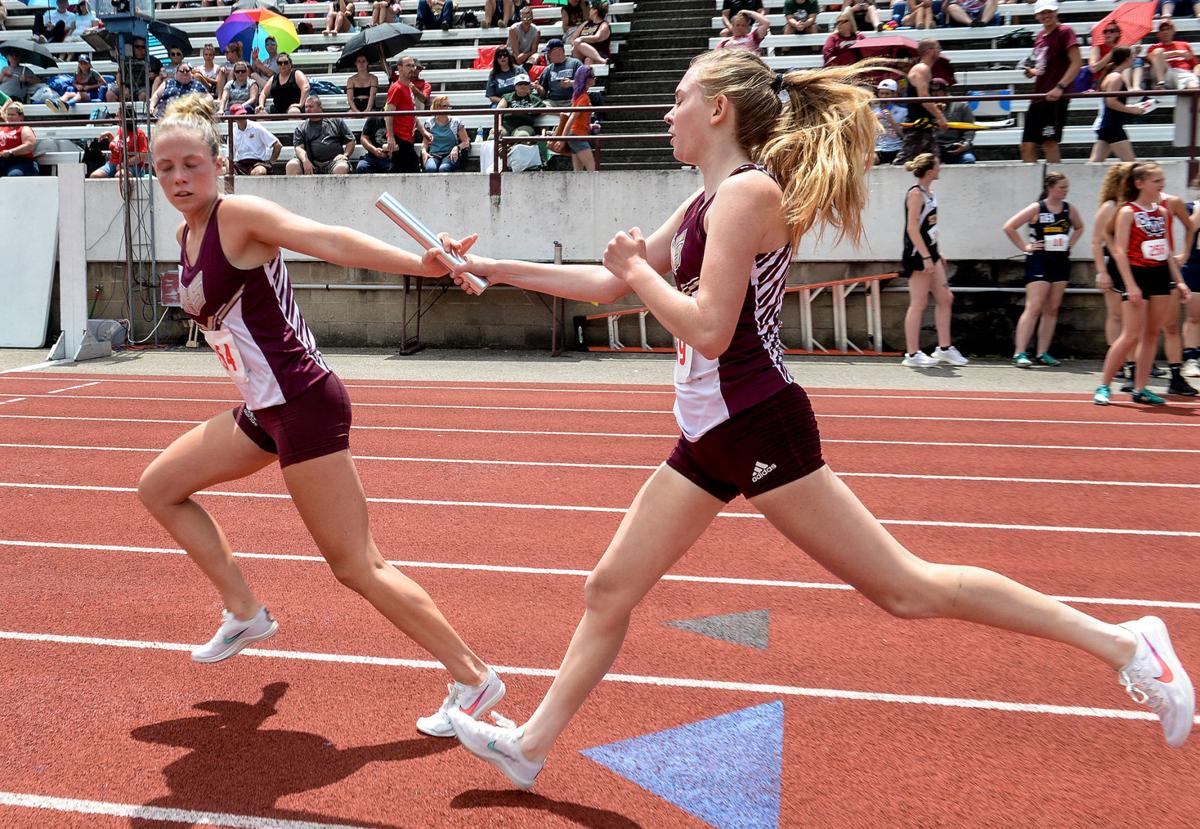 Williamstown anchor runner Ella Hesson (left) receives the baton from teammate Reagan Ortiz in the 4x800 relay, which the Yellowjackets won, during the Class A state track meet Thursday at University of Charleston Stadium. 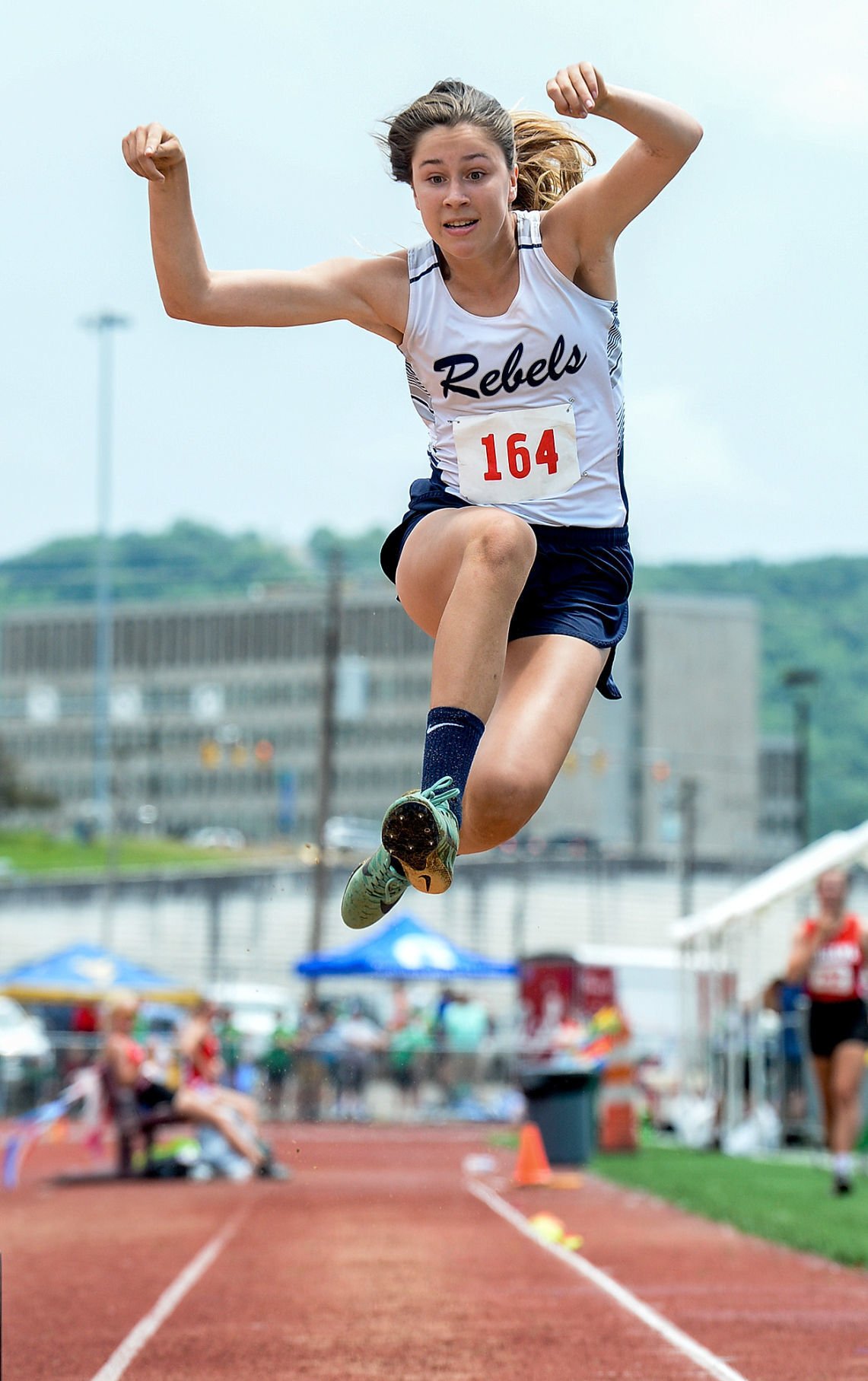 Ritchie County’s Olivia Cress was the high scorer in the Class A girls state track meet, winning the long jump, high jump and 100- and 200-meter hurdles. 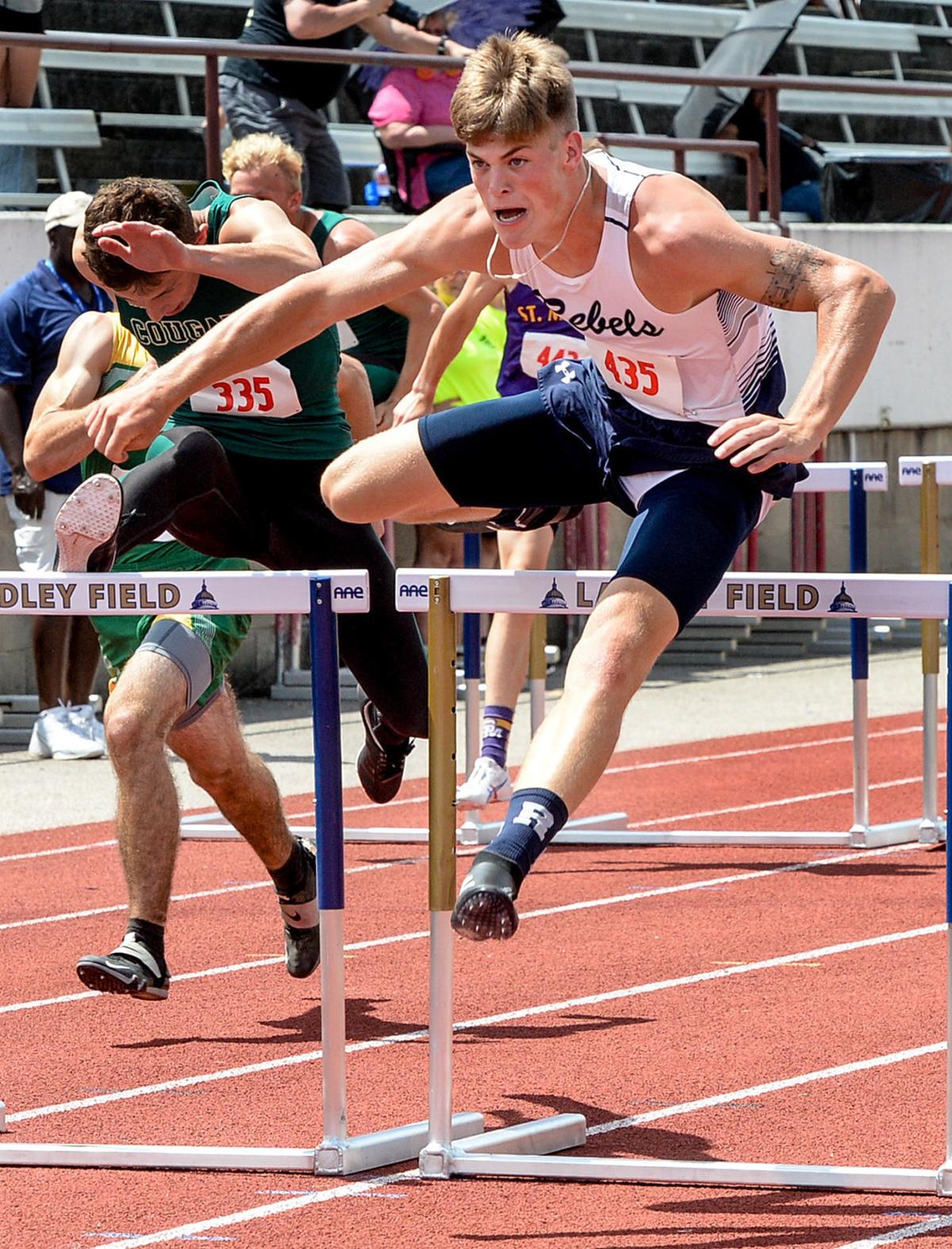 Williamstown anchor runner Ella Hesson (left) receives the baton from teammate Reagan Ortiz in the 4x800 relay, which the Yellowjackets won, during the Class A state track meet Thursday at University of Charleston Stadium.

Ritchie County’s Olivia Cress was the high scorer in the Class A girls state track meet, winning the long jump, high jump and 100- and 200-meter hurdles.

CHARLESTON — Lately, the Class A state track meets have been the picture of parity. Until Williamstown and Doddridge County rolled into town, that is.

The Yellowjackets ended a string of five different teams capturing the girls Class A championship Thursday when they led from start to finish and, in dominating fashion, defended their state title on a stormy day at University of Charleston Stadium.

Williamstown, which won the crown in 2019 — the last time the state meet was contested — led eight of the 18 girls events and wound up with 130 points, well ahead of runner-up Doddridge County (73). The Jackets took all four relay events in which they were entered.

In the boys meet, Doddridge County emerged from a two-team battle with Ritchie County to also defend its state championship by a margin of 1221/2-951/2. That snapped a streak of four straight different winners for the boys state title.

Senior distance runner Ella Hesson was key for Williamstown’s romp in the girls meet, sweeping all three of her individual events for a second straight time — the 800-, 1,600- and 3,200-meter runs. She also ran on the Jackets’ victorious 4x800 relay.

Hesson won the same three events as a sophomore in 2019 before COVID-19 wiped out all spring sports last year. She said she felt some pressure to do the same this week.

“It’s definitely been hard,’’ Hesson said, “because I know there were a lot of people expecting me to do it, since I did it my sophomore year. But I was expecting it more for myself than anyone else, so I was really trying to push myself this year to go out with a bang.’’

Likewise, Hesson knew her Williamstown team came into the state meet as the heavy favorite, and said the Jackets didn’t back away from those lofty projections.

“We definitely use it for motivation,’’ she said. “We all cheer each other on, and do the best we can. I knew we could go in here and win it today if we really tried our best, and ran the way I knew we could.’’

Like Hesson, Magnolia’s Mady Winters entered the state meet with great expectations, since she had won the shot put and discus events as a sophomore two years ago. She not only duplicated that feat Thursday, but turned in the only Class A state meet record this week with a heave of 41-71/4 in the shot put. She also led the discus in 125-5.

“It was definitely a goal I had in mind coming down here,’’ Winters said of breaking the shot record, “being ranked first by a very large amount. It was something I really wanted to do. After coming down here my sophomore year not really expected to win, winning then put a bit more stress on me coming down here, not knowing what was going to happen or who was going to show up and who wasn’t.

“I knew I had to show up in order to win, and I’m glad I won when it mattered. One of those storybook endings right here — a great way to end my career.’’

Winters was also a first-team All-State athlete in basketball and had a memorable 50-point, 15-rebound game against Williamstown during the Shootout at the Big House showcase event at West Virginia State last season.

Doddridge wouldn’t be denied in the boys meet, prevailing despite projections of a tight three-team race with Ritchie and Magnolia.

The highest-finishing Kanawha Valley team was the Charleston Catholic girls in sixth place with 33 points. The best effort for the Irish girls were third places by Lindsay Carr in the 800 and the 4x200 and 4x400 relay teams. For Buffalo, Lilly Wyant was second in the girls discus and David Whittington tied for second in boys high jump.

Due to COVID-19, nearly the entire schedule was devoted to Class A events Thursday as state meet competition is being divided over four days instead of the normal two. Four AA events were held Thursday evening, more than an hour following the conclusion of the Class A meet. The majority of the AA meet will be held Friday, and the bulk of the AAA meet Saturday.

There was a lightning delay of 50 minutes Thursday that came with seven events left to run, and pushed back the start of the AA mini-meet. That followed a pair of downpours in the second half of final session, and another one hit during the awards ceremonies. Still, it didn’t compare with the four-hour storm delay the last time the state meet was held in 2019.