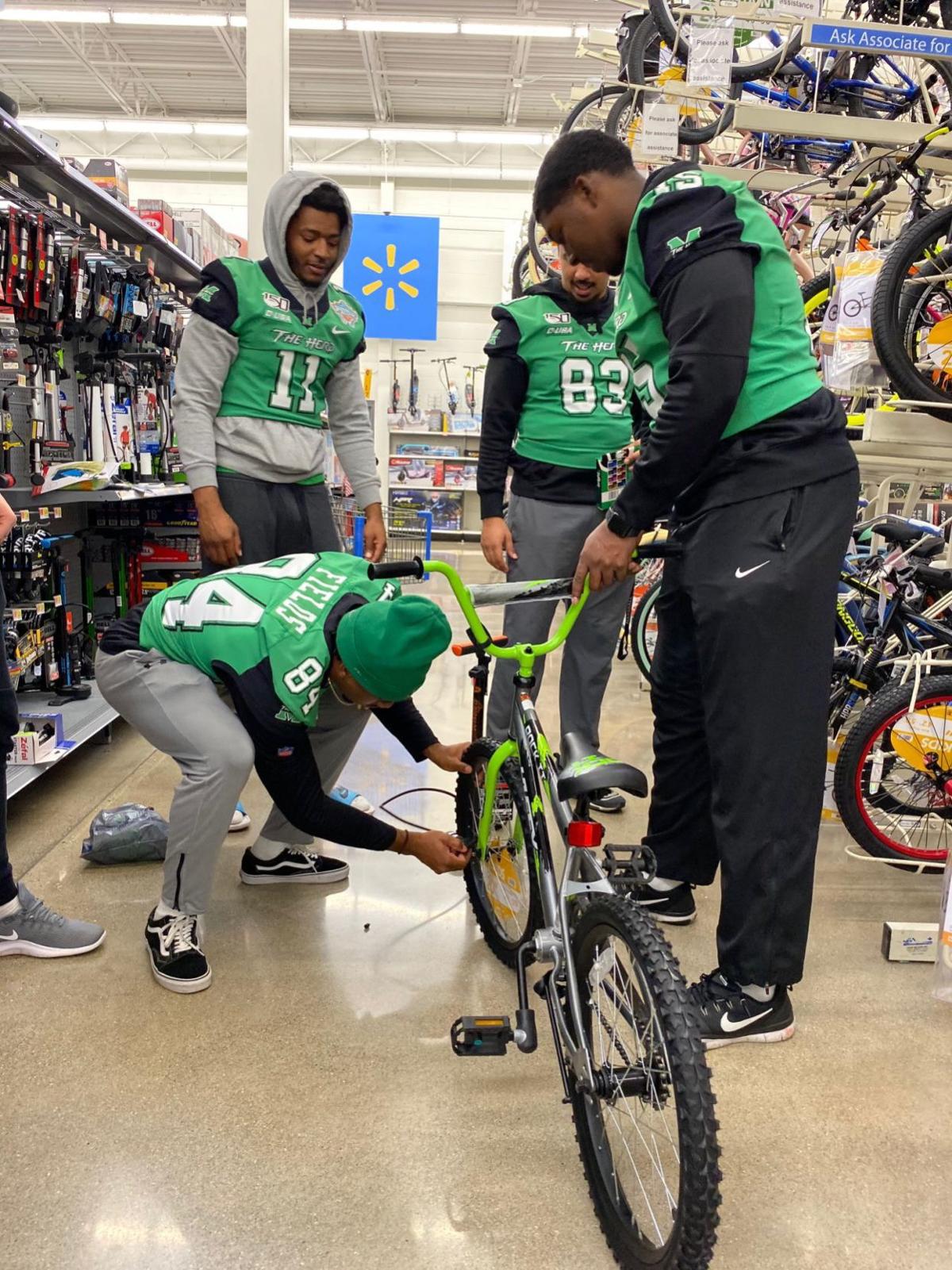 Wide receiver Joey Fields tries to pump up a tire on a bicycle being purchased for a local youth as Herd tight ends Xavier Gaines, Devin Miller and Armani Levias look on during Marshall football’s Toy Drive at the Barboursville Walmart on Saturday, Dec. 14, 2019. 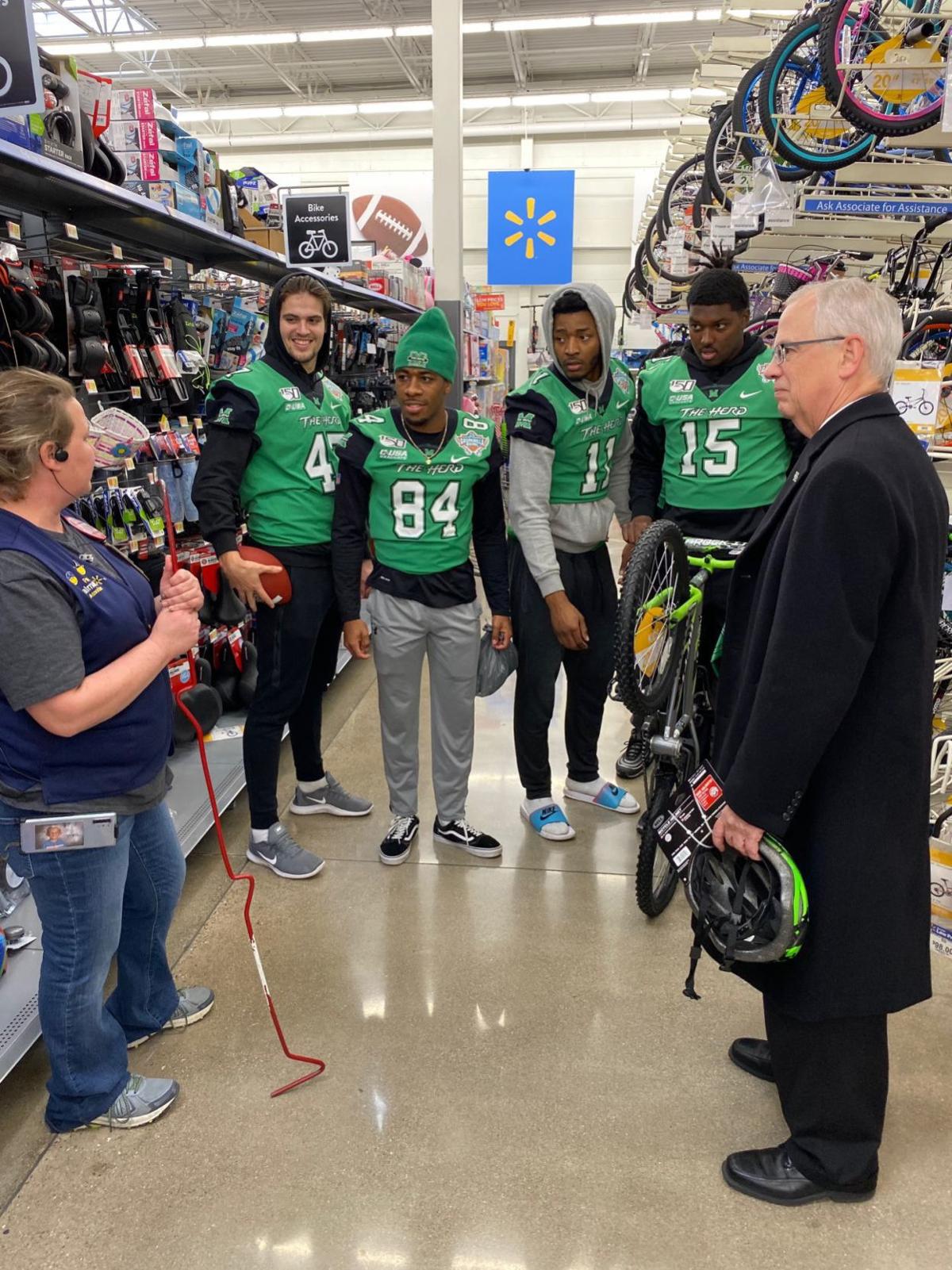 An associate with the Barboursville Walmart speaks with Marshall football players and Marshall University President Jerome Gilbert as the players join Gilbert in shopping for children during Marshall football’s Toy Drive on Saturday afternoon, Dec. 14, 2019.

Wide receiver Joey Fields tries to pump up a tire on a bicycle being purchased for a local youth as Herd tight ends Xavier Gaines, Devin Miller and Armani Levias look on during Marshall football’s Toy Drive at the Barboursville Walmart on Saturday, Dec. 14, 2019.

An associate with the Barboursville Walmart speaks with Marshall football players and Marshall University President Jerome Gilbert as the players join Gilbert in shopping for children during Marshall football’s Toy Drive on Saturday afternoon, Dec. 14, 2019.

BARBOURSVILLE — As Marshall University President Jerome Gilbert walked over to the toy drop-off area in the Barboursville Walmart on Saturday, a sly smile came across his face.

“You guys want to help me shop?” Gilbert asked the throng of Marshall football players waiting to assist shoppers.

Immediately, Marshall junior tight end Xavier Gaines stepped up to Gilbert and the two worked their way through the store with Gaines recruiting players to join as they walked.

On the way there, Gilbert was stopped by Marshall quarterbacks Alex Thomson and Jackson White, along with several players who were documenting the event on a GoPro while assisting customers.

Soon, Gaines and Gilbert were joined by fellow tight ends Armani Levias and Devin Miller and wide receiver Joey Fields, and the group walked back to the bicycle area in search of the perfect bicycle for a young boy.

In the end, there was only one that was fitting: a bright green bicycle — as close to kelly green as they could find.

Fields got a bicycle pump and tried to inflate the tires, while Gilbert set search for a helmet to match the new bike.

After the group finished paying for the bike and other items, they headed outside to Marshall’s football equipment trailer, which was flanked by a pair of tents due to the rainy weather.

The rain was not the only thing streaming through Barboursville on Saturday. So too were the gifts and donations of many who wanted to join Marshall’s program in giving to underprivileged children through Marshall’s Toy Drive.

“It has been consistent all day,” said Mark Gale, Marshall’s director of football operations. “In this weather? That’s incredible.”

At day’s end, Gale announced on social media the success of Saturday’s Toy Drive, which has become a staple in Marshall’s December schedule.

The event has become one that is memorable for players as well, as evidenced by a story that Gale shared outside of the equipment trailer Saturday.

Gale recalled a story told to him by quarterback Jackson White and long snapper Matthew Beardall of how former teammates and roommates Ryan Bee and Blake Keller each sent them money through Venmo to purchase presents with.

Keller is currently in Cincinnati and Bee is now on the active roster of the Washington Redskins.

“They haven’t forgotten to give back,” Gale said. “That’s special.”

The day continued to be special for Gale as the Toy Drive wrapped up around 3 p.m. and Marshall’s Equipment Trailer finished loading up before returning to Huntington.

Around 4:30 p.m., Gale took to social media to announce the success of the drive.

“Just communicated with Wal-Mart and their best guesstimate is citizens of the Tri-State donated $20,500 to the @HerdFB Toy Drive in a 4 hour span,” Gale tweeted. “I am speechless (first time ever) and humbled by your generosity. To ALL that gave, a great big THUNDER CLAP!”

For many of Marshall’s players, it was the final community-based event in the Tri-State that they will have as part of the team. On Thursday morning, the team departs for Tampa, Florida, where they take on UCF in the 2019 Bad Boy Mowers Gasparilla Bowl.

While it may have been the last event for some, this is one that was special.

This one has the chance to give kids a good Christmas — a lasting impact that goes well beyond anything done on the field.