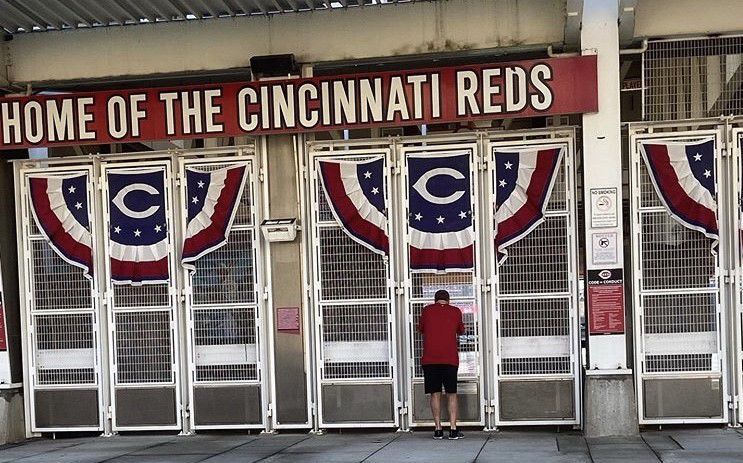 Jerry Lucas of Huntington stands longingly outside the gates at Great American Ball Park in Cincinnati Friday before the Reds game with the Detroit Tigers. Lucas and his wife, Monica, are Reds fans who went to experience Opening Day, even though the stadium was closed to fans. 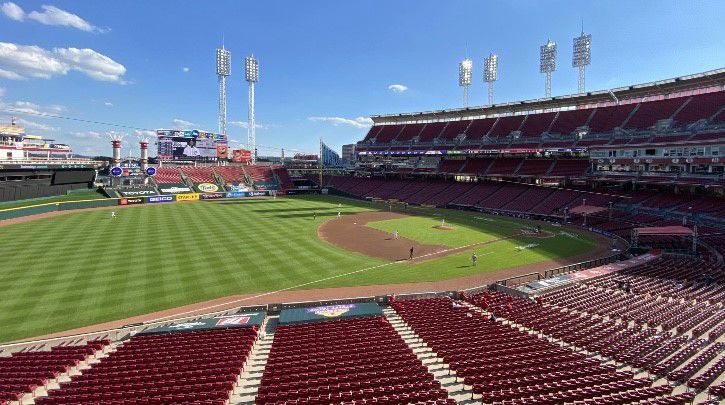 The Cincinnati Reds take on the Detroit Tigers Friday in the first inning of a near-empty Great American Ball Park.

Jerry Lucas of Huntington stands longingly outside the gates at Great American Ball Park in Cincinnati Friday before the Reds game with the Detroit Tigers. Lucas and his wife, Monica, are Reds fans who went to experience Opening Day, even though the stadium was closed to fans.

The Cincinnati Reds take on the Detroit Tigers Friday in the first inning of a near-empty Great American Ball Park.

All three came up big Friday in an Opening Day 7-1 victory over the Detroit Tigers Friday at, thanks to COVID-19 restrictions, near-empty Great American Ball Park.

Castellanos and Moustakas contributed in the first inning when Cincinnati took a 2-0 lead. Tigers pitcher Matthew Boyd, making his first Opening Day start, walked Philip Ervin to start the bottom of the first. Joey Votto singled to right, then Boyd hit Eugenio Suarez and Castellanos back-to-back to force in a run. Moustakas followed with a flair that dropped in front of rightfielder Cameron Maybin to score Votto.

Castellanos doubled to left-center with one out in the third inning, then scored when Moustakas followed with a single to make it 3-0.

Detroit pulled within 3-1 when C.J. Cron hit a 93 mph fastball 447 feet into the upper deck in left. It was one of the few well-hit balls off Reds starter and winner Sonny Gray, whose strikeout of Austin Romine in the fifth inning was the 1,000th of his career.

Gray (1-0) allowed one run on three hits with nine strikeouts and one walk in six innings to earn the victory. He extended his streak of games allowing six or fewer hits to a Major League-record 34. Boyd (0-1) took the loss.

Joey Votto pushed the Reds’ lead to 4-1 with a homer to right in the bottom of the fifth. Akiyama, pinch-hitting for Ervin in the sixth, singled up the middle off relief pitcher Jose Cisnero to plate Freddy Galvis to make it 5-1.

Moustakas’ third hit of the night was a no-doubter of a home run to right off reliever David McKay with Travis Jankowski, pinch-running for Castellanos, on base, making it 7-1.

SCHEBLER TRADED: The Reds traded outfielder Scott Schebler to the Atlanta Braves for cash on Friday.

The Reds designated Schebler for assignment on Sunday, giving them 10 days to trade or release him if he didn’t pass through waivers. Apparently more than one team claimed Schebler, leading to the deal with Atlanta.

HARDCORE FANS: Jerry and Monica Lucas, a husband and wife duo from Huntington, traveled here for their 20th Opening Day Friday, even though Great American Ball Park was closed to fans.

After a quick visit outside the stadium on the concourse, the Lucas’ headed to the Holy Grail Tavern & Grille across Joe Nuxhall Way from the ball park.

DeSCLAFANI to IL: The Reds placed starting pitcher Anthony DeSclafani on the 10-day disabled list because of a “mild right teres major strain” — in other words, a shoulder muscle injury.

Because the move is retroactive to Monday, DeScalafani is expected to miss only one start. Tyler Mahle is the most likely candidate to start in DeSclafani’s place.

OBSERVANCE: Most players from the Reds and Tigers knelt together on the field before the game and observed a moment of silence in solidarity for racial and social justice. Most stood for the playing of the Star Spangled Banner.

ROUNDING UP: Despite crowd noise piped into the stadium, players, umpires, members of the grounds crew and a few workers in the stands could clearly be heard throughout the ball park. In recent seasons, when Reds pitchers struck out 11 or more batters, fans at the game won a free LaRosa’s pizza. With no fans this season, each time 11 opposing batter whiff, LaRosa’s will donate $1,000 to the Reds Community Fund.