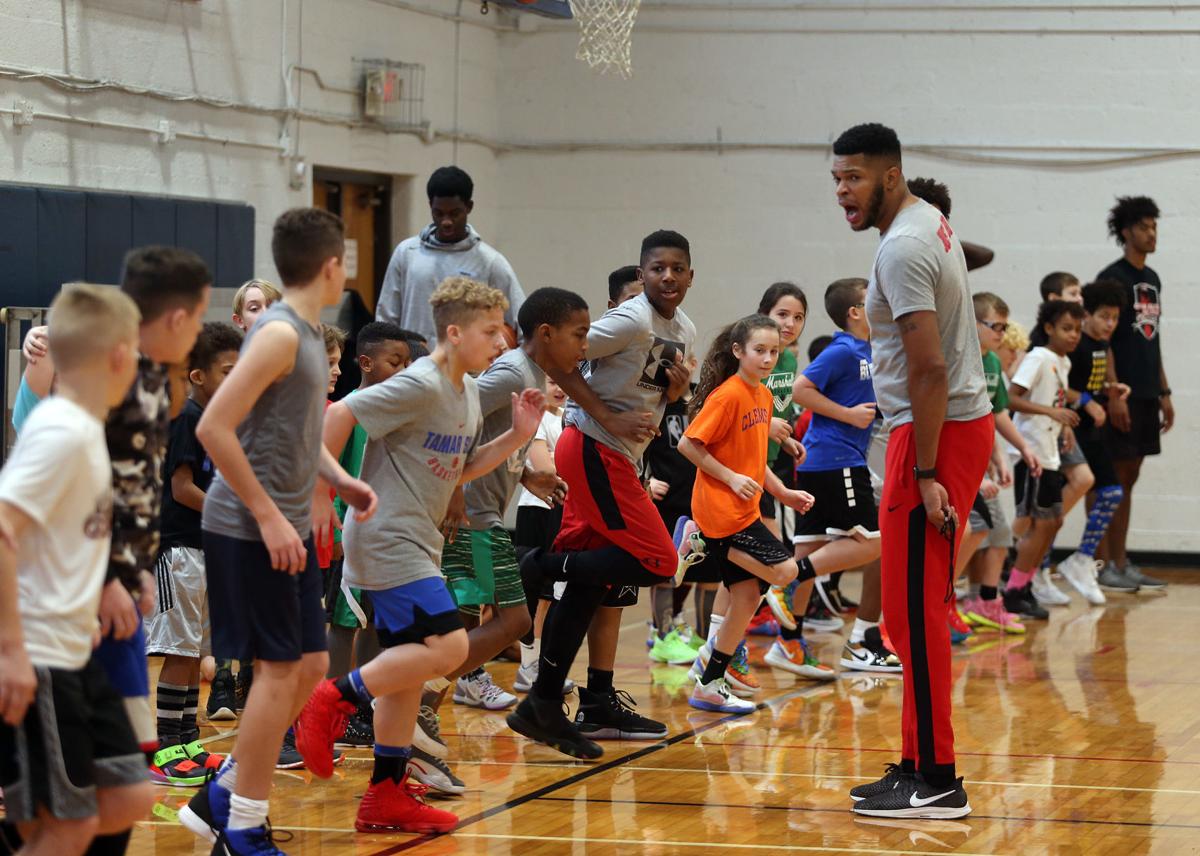 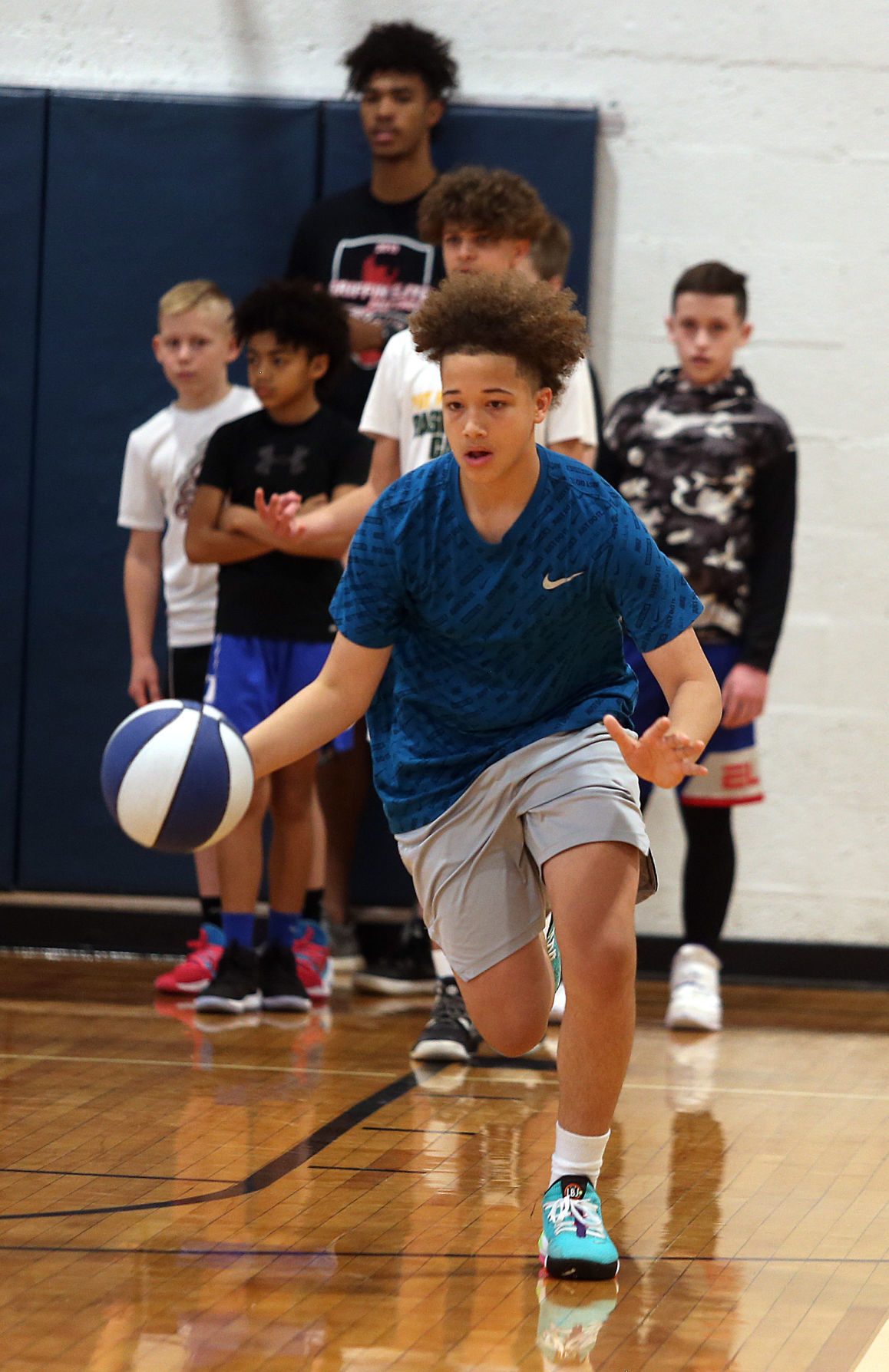 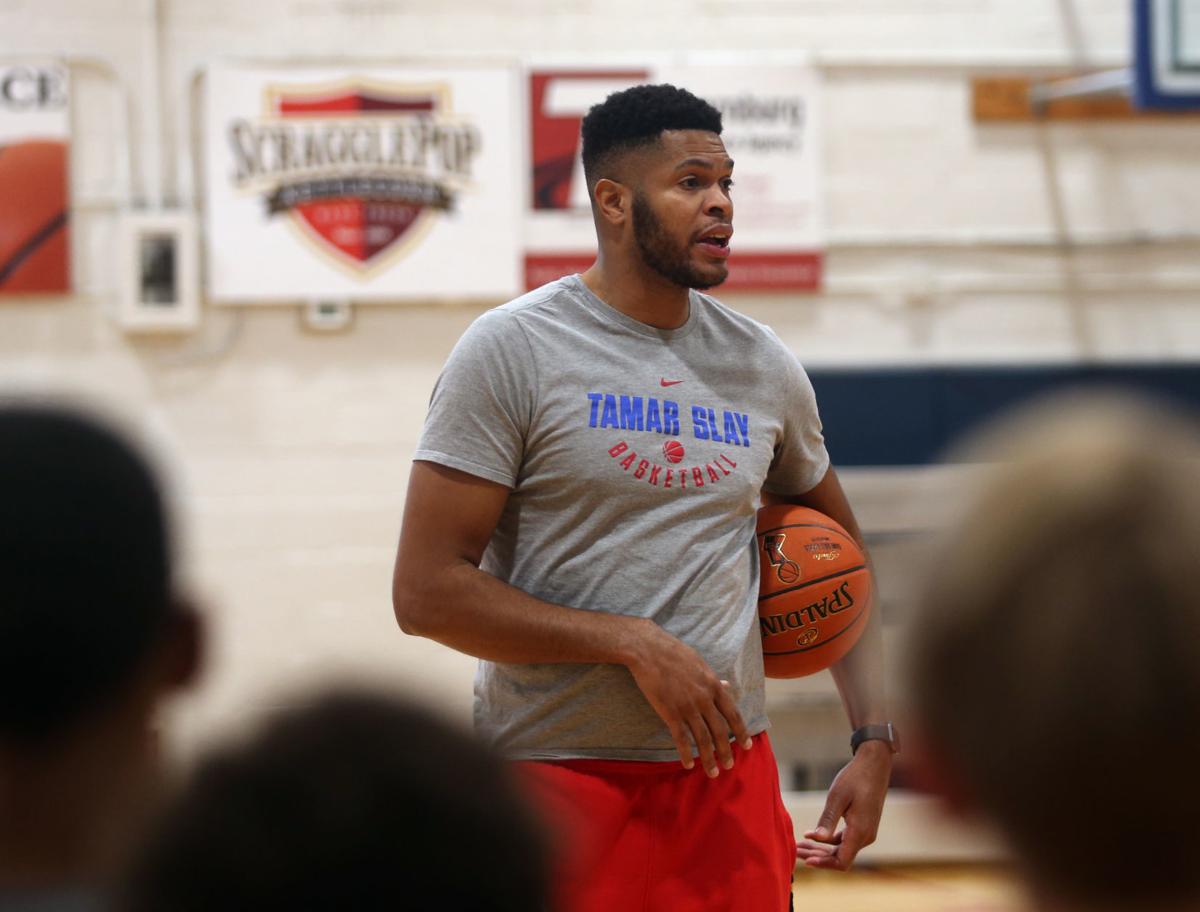 With a basketball in his hands, however, Malachi, 10, looks like a basketball player, and a good one at that. The younger Brown displayed his skills and learned new ones Tuesday during the second day of the Tamar Slay Basketball Camp at the YMCA Phil Cline Center. He was one of about 65 kids who attended, learning about basketball and life from the former Marshall University star and NBA player.

“This was fun,” Malachi said. “I learned about dribbling and how to be better.”

Better in more ways that just basketball. Slay emphasized ball handling and defense during the two-day event, but also took time to encourage the youngster to be the best they can be at home, in the classroom and all other aspects of their lives. Coach Arkel Bruce from Huntington Prep and several of his players worked the camp, along with former Marshall player Rondale Watson.

“You have exposure to some of the best high school players in the country,” Slay, 39, told the kids as he referred to the Huntington Prep stars. “You’ll see these guys as lottery picks in a couple of years.”

Slay, the 54th pick in the 2002 NBA Draft after four seasons at Marshall, played three seasons, two with New Jersey and one at Charlotte. The native of Beckley and MU hall of famer brought his camp to the YMCA to give back to an area he said gave so much to him.

“It’s a special opportunity for me this holiday season,” Slay said of offering the camp to kids. “I was born and raised in West Virginia. I was fortunate enough to play in the NBA and I want to give back and share some of what I’ve learned. Growing up, I wouldn’t have been able to come to a camp like this. I idolized the guys who played at Woodrow Wilson — the Nabors brothers, Anthony Scruggs, Shea Fleenor — or at Oak Hill — P.G. Green, Stuff Lynch, Tracy Shelton.”

Scheyer Graham, 11, of Ironton said he appreciated the opportunity to learn from a former NBA player.

“I like it that they helped me improve my ball handling and shooting skills,” said Graham, son of Ironton High School girls coach Doug Graham. “I learned how to better dribble between my legs, cross over and behind my back. I also learned that nothing ever comes easy and it’s a process.”

Landon Lewis, 13 and a student at Huntington East Middle School, said he appreciated the tips on becoming a better dribbler.

“I liked the competition and this helped me get better,” Lewis said.

Christian Johnson, 7 and a student at Altizer Elementary, said the camp was “really good” and that he will use what he learned in games.

“We gave them five ball-handling drills,” Slay said. “Four regular drills and one fancy one. That’s where the game is going. Everyone can handle the ball, now. We stressed ball handling and defense. Shooting comes naturally. You have to be able to handle the ball, play hard and play defense if you want to win.”

Developing those skills, Slay said, are necessary for players to succeed at higher levels.

“Growing up in West Virginia, we were overlooked,” Slay said. “The guys in New York and L.A. don’t think you can play. We want these kids to have a dream that they can play against anyone in the country. I always carried that chip on my shoulder.”

On Tuesday, he placed that chip on the shoulders of his campers.