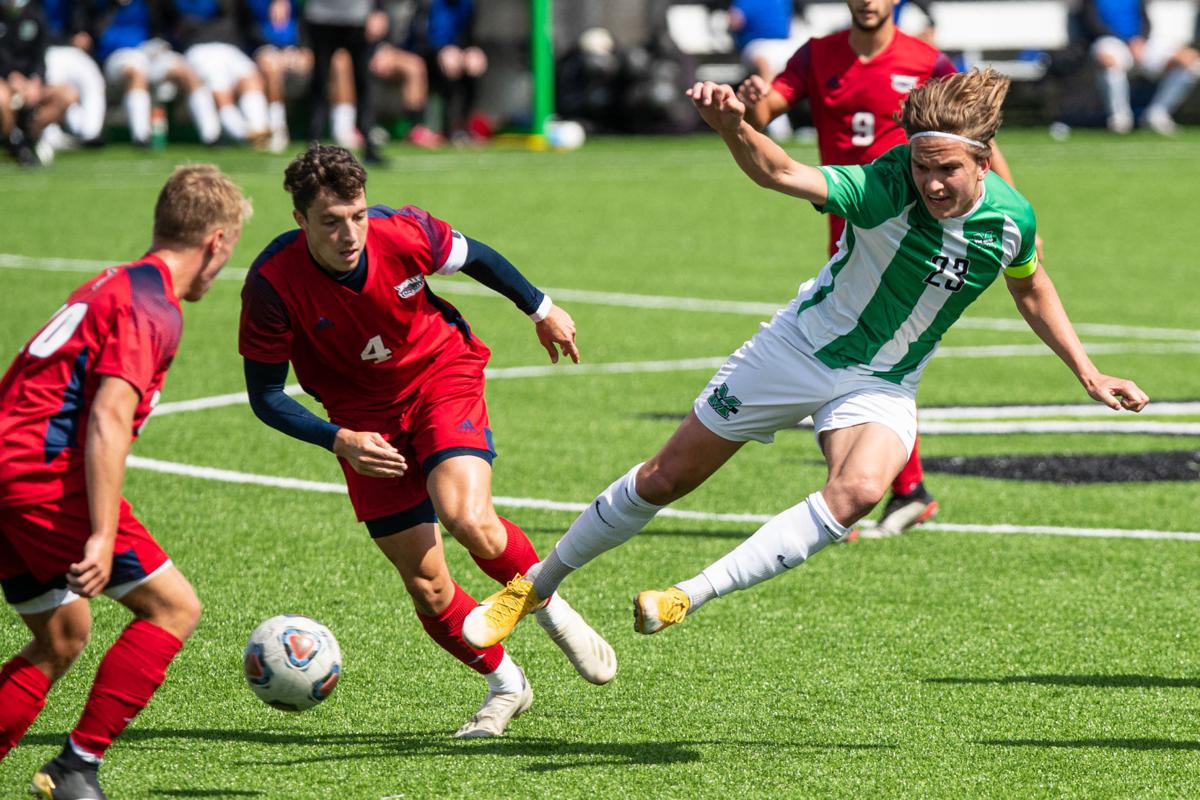 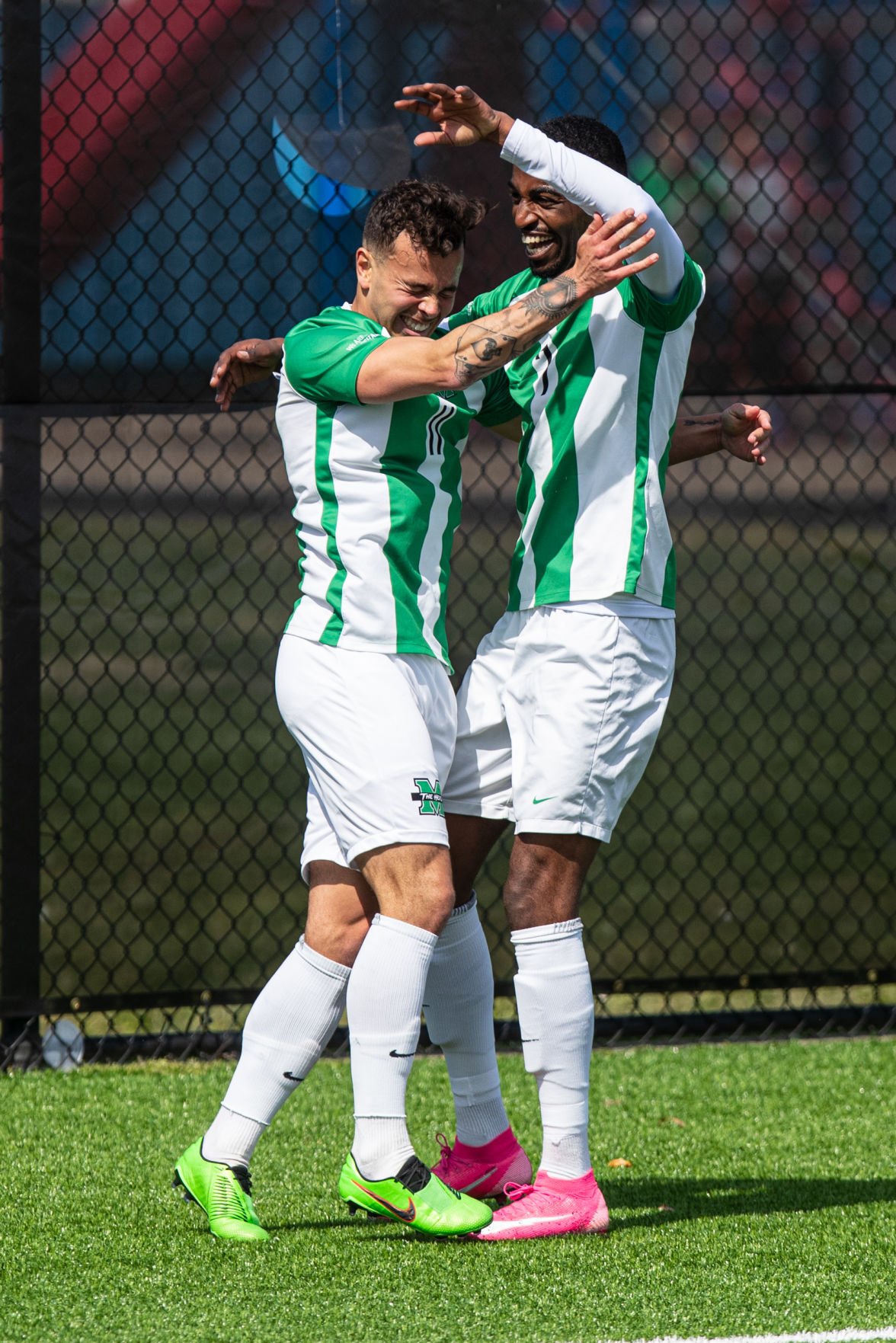 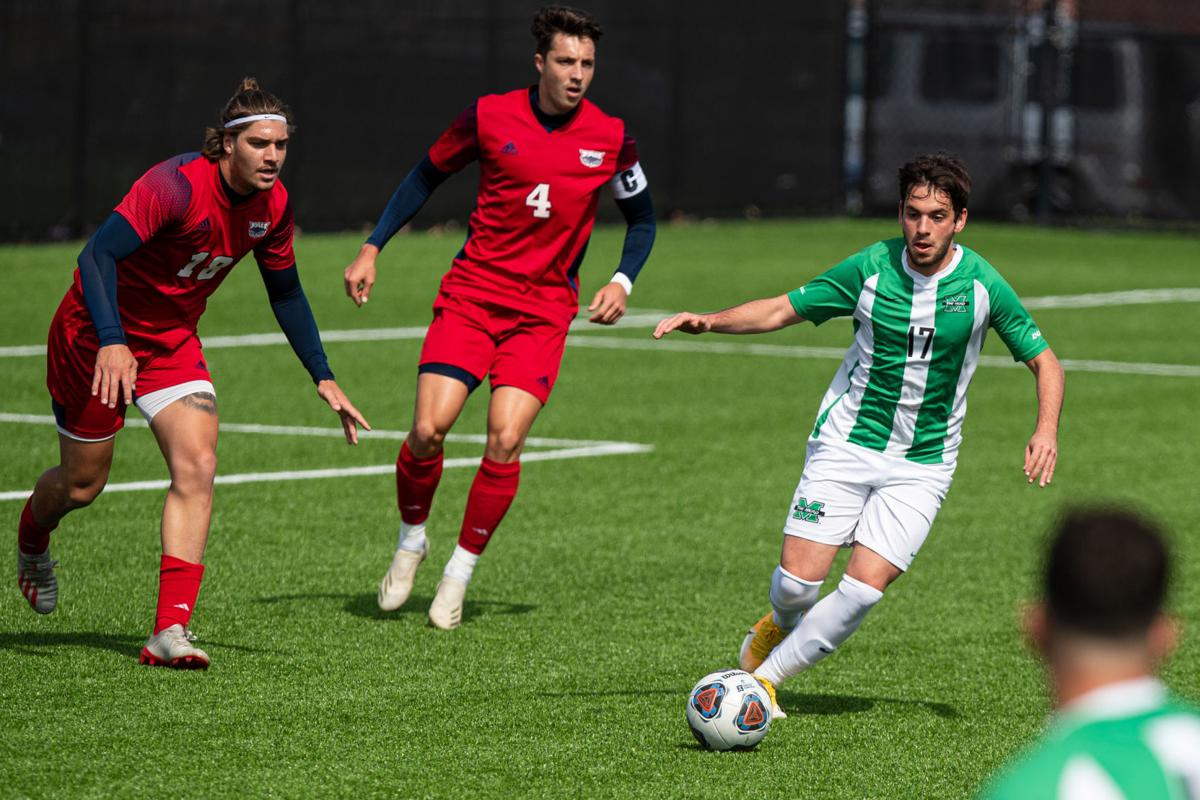 Marshall's Joao Souza (17) cuts across the field as the Herd takes on Florida Atlantic in a Conference USA men’s soccer match Saturday, April 3, 2021, at the Veterans Memorial Soccer Complex in Huntington.

Marshall's Joao Souza (17) cuts across the field as the Herd takes on Florida Atlantic in a Conference USA men’s soccer match Saturday, April 3, 2021, at the Veterans Memorial Soccer Complex in Huntington.

HUNTINGTON — Joao Souza’s first-half goal was the difference in a 1-0 shutout victory for the No. 13 Marshall men’s soccer team Saturday afternoon at Hoops Family Field in Huntington.

The win snapped a two game winless streak that began with a road loss to West Virginia and continued when the team returned home, playing to a draw with Old Dominion last week.

From head coach Chris Grassie’s perspective, those games weren’t so different from Saturday’s performance. The Herd (7-2-2, 4-0-1 CUSA) played a strong defensive game and allowed just four shots in the match, none of which were on goal for the visiting Owls.

Offensively, the Herd created their own chances, firing a total of 23 shots in the win, 10 of which were on target. The glaring difference, Grassie said, was that the team capitalized on at least one of their chances.

“I think it’s just the odds, you know, if we’re hitting the target that many times, then, statistically speaking, we have to score some goals. We certainly had a number of shots against WVU, against ODU created a lot of chances, but we worked on finishing all week,” Grassie said.

Marshall’s first real chance at a goal didn’t come until the 30th minute, when Pedro Dollabella put a chip-shot header off a free kick just wide of the net. A few minutes later Milo Yosef handled a perfectly placed cross about 5 yards outside the goalie box but wasn’t able to finish.

Yosef’s ability to complete his runs was key in the Herd’s ability ultimately to score the first and only goal of the match. Grassie said those runs opened up holes across the field that weren’t there at the start of the match, but once they were created, chances came quickly.

Jamil Roberts caught up with a pass that led him down the left sideline, he crossed it into the box for Yosef, but the ball ricocheted off his foot and created the shot for Souza, who put it past the keeper after sliding to make contact.

“I gambled,” he said. “Coach tells us to go in the box and gamble, and I didn’t know Milo was going to miss (the chance) because he always puts it in, but I went anyway and the ball was right there.”

It went down as a double-assist for Roberts and Yosef. For Roberts, it was the 19th of his career, moving him past Ryan LaPointe for second on Marshall’s all-time list.

Being down around the goal isn’t uncommon for the Thundering Herd, who are averaging about 18 shots per contest, but converting on those chances is more mental than anything, Souza said.

“We have to be ready but at the same time relaxed,” Souza said. “Most of the time when we get the ball in front of the goal and have these chances, we can’t finish because we’re so excited just thinking about (scoring).”

To eliminate some of the angst, Grassie said re-creating those opportunities in practice is the first step in clearing their minds when they appear in matches.

“This week we did a lot of positive visualizations, visualizing the first touch, visualizing the shot, making that run, beating the defender to a header and making a finish, just to put ourselves in position to score and win games,” Grassie said.

He also praised the defensive efforts of center backs Collin Mocyunas and Nathan Dossantos in the win, who spearheaded the Marshall defensive effort the left FAU (5-2-3, 2-3 C-USA) with just four shot opportunities. Marshall goalkeeper Oliver Semmie played the full time without having to make a save.

The Herd will have some time to rest after the win, with its next match coming Saturday, April 10, at UAB before returning home for the final match of the regular season to face nationally ranked Charlotte on April 18.

Marshall takes on Florida Atlantic during an NCAA men’s soccer match on Saturday, April 3, 2021, at the Veterans Memorial Soccer Complex in Hu…