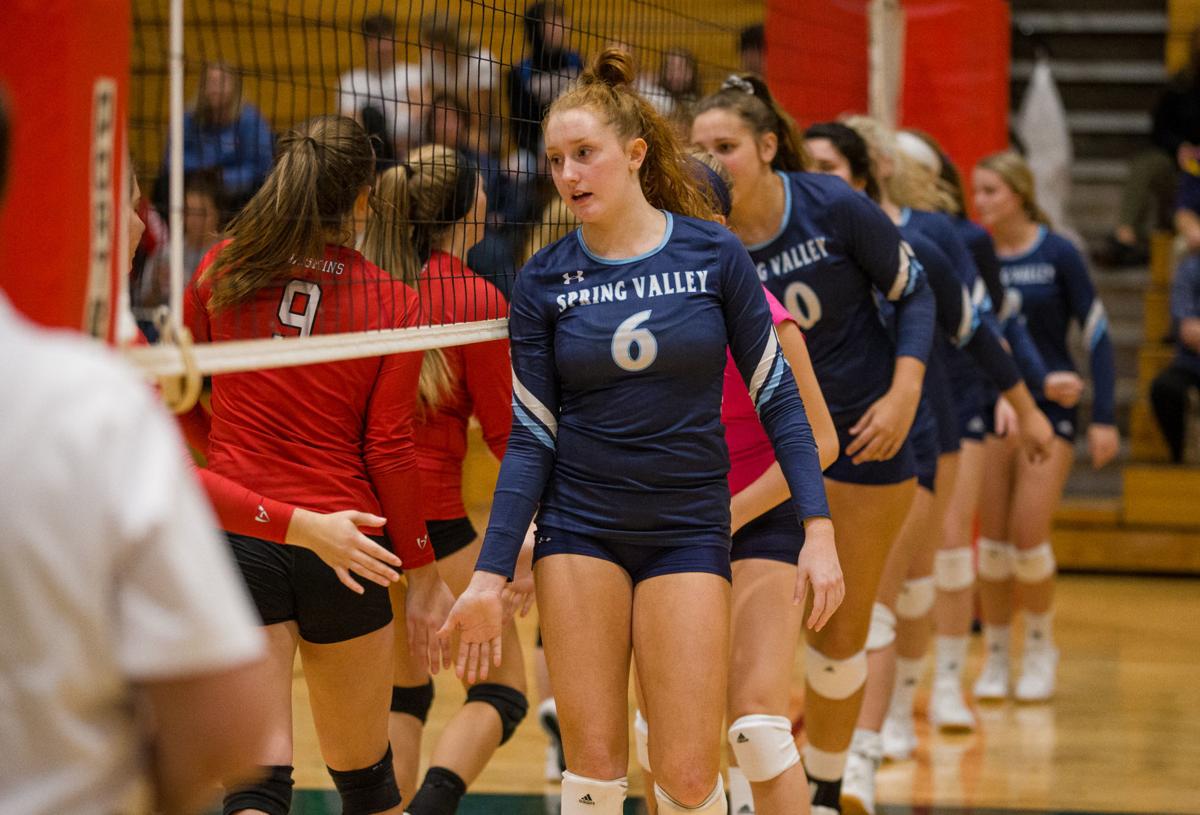 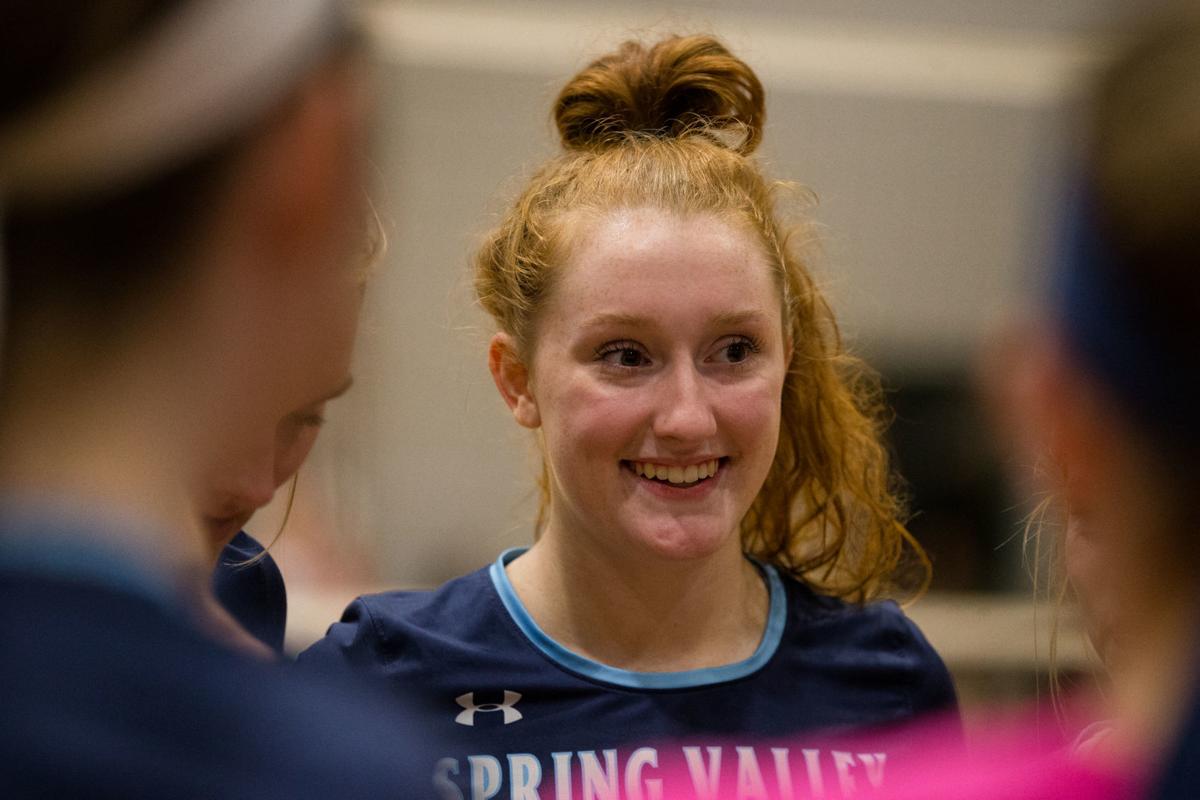 Spring Valley’s Alex Darby talks with her teammates before a match against Hurricane on Oct. 8. 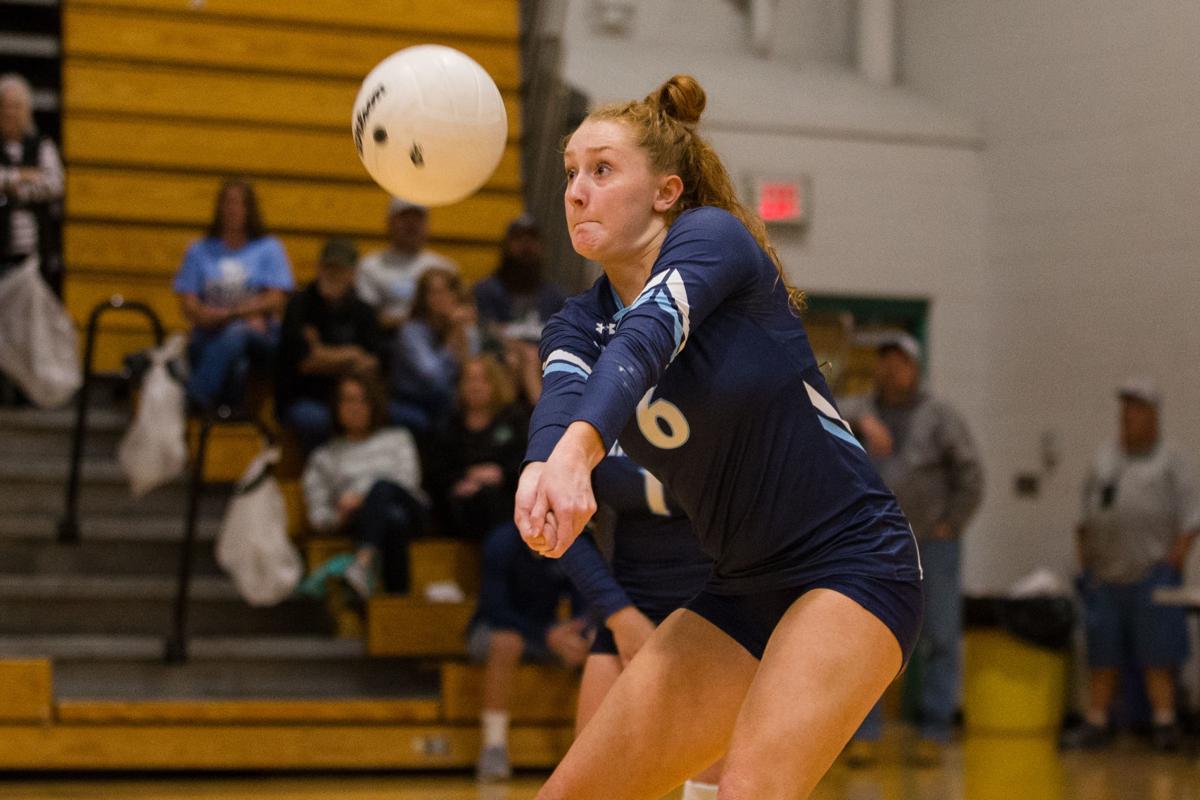 Spring Valley’s Alex Darby receives the serve as the Wolves take on Hurricane during a high school volleyball match on Oct. 8 at Huntington High School.

Spring Valley’s Alex Darby talks with her teammates before a match against Hurricane on Oct. 8.

Spring Valley’s Alex Darby receives the serve as the Wolves take on Hurricane during a high school volleyball match on Oct. 8 at Huntington High School.

CHARLESTON — Spring Valley wasn’t able to stand atop the mountain this year after winning the 2018 Class AAA state volleyball title. That honor belonged to the 58-2-2 Patriots of George Washington head coach Missy Smith.

Despite losing four senior starters, the Timberwolves of head coach Cadara Shreve advanced to the state quarterfinals before bowing out to Parkersburg.

Nonetheless, SVHS senior Alex Darby played a key role and along with earning first team all-state status for a third straight year, she was chosen as the captain of the triple-A first unit by the West Virginia Sports Writers Association.

“She’s definitely the most well rounded player we’ve had,” coach Shreve stated of Darby, who was named the Mountain State Athletic Conference’s Player of the Year. “She’s just good in all aspects of the game and a great player.”’

The four-year starter finished her career with more than 2,200 kills and nearly 1,500 digs.

“She’s so good because she does everything fundamentally the right way,” added Shreve of the future W.Va. State Yellow Jacket. “She has always worked hard in practice and she’s just a complete player.”

Eggleton was one of the driving forces in getting the Red Dragons to the state semifinals before falling to GWHS. In her final campaign, Eggleton put down 539 kills with a .472 hitting efficiency. Along with being a 93.5 percent server, she had 131 aces, 171 total blocks, 480 assists and 586 digs.

“They are a close-knit group, which was helpful,” said coach Smith. “When we didn’t qualify last year, from the minute we walked out of Woodrow Wilson’s gym at the regional you could see they were not going to let that happen again.”

“She improved her defensive play,” Smith said of Hughes. “She wanted to be an all-around player and not just a front row player and she had to do some growing up. It’s hard not coming off the floor and having to make adjustments. Her and Karli were on the floor in almost every point we played.”

Edwards, the Patriots’ libero, served at 86 percent and tallied 120 aces to go along with 92 assists and 678 digs.

“In my mind, she’s the best libero in the state,” Smith continued. “Last year when the season was over we had an honest discussion about what she needed to do to not come off the floor.

“She had a great postseason for us and was steady through the year, but really played well in the postseason.”

Musselman held the No. 1 seed entering the tournament, but had to settle for runner-up honors. The Applemen were represented on the first team by sophomore Sadie Wright and freshman Hannah Howard. Wright hit .300 with 233 kills, 56 aces, 74 blocks and as many digs. Howard, who led the team with a 1.87 passer rating, finished with 63 aces, 430 digs and 412 kills while hitting .244.

Senior Ashten Boggs led University to the final weekend of the season as the Hawk served at 93 percent and posted 183 blocks and 534 kills.

Leading the second team was captain Clelia Molinari Tosatti, a sophomore exchange student for the Parkersburg Big Reds, who was joined by senior teammate Shelby Roberts.

Which is the right decision for college football: postponing till spring, or forging ahead to play this fall?