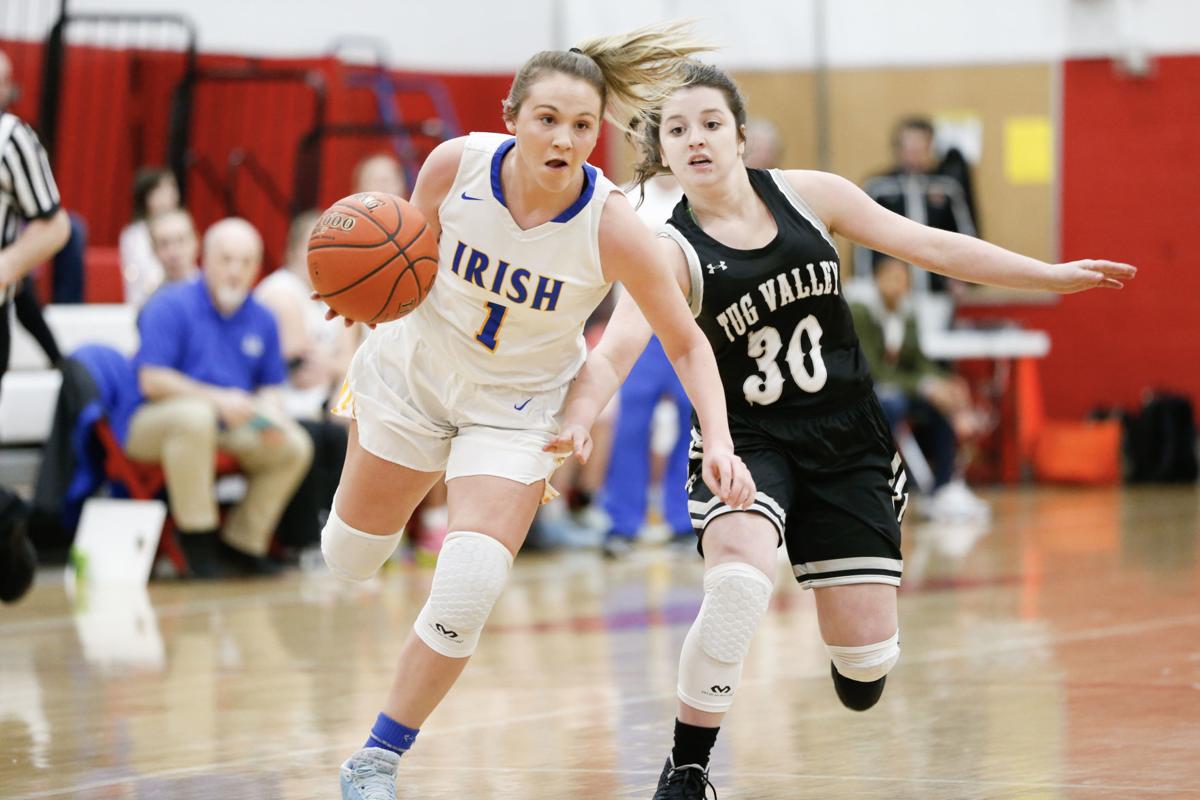 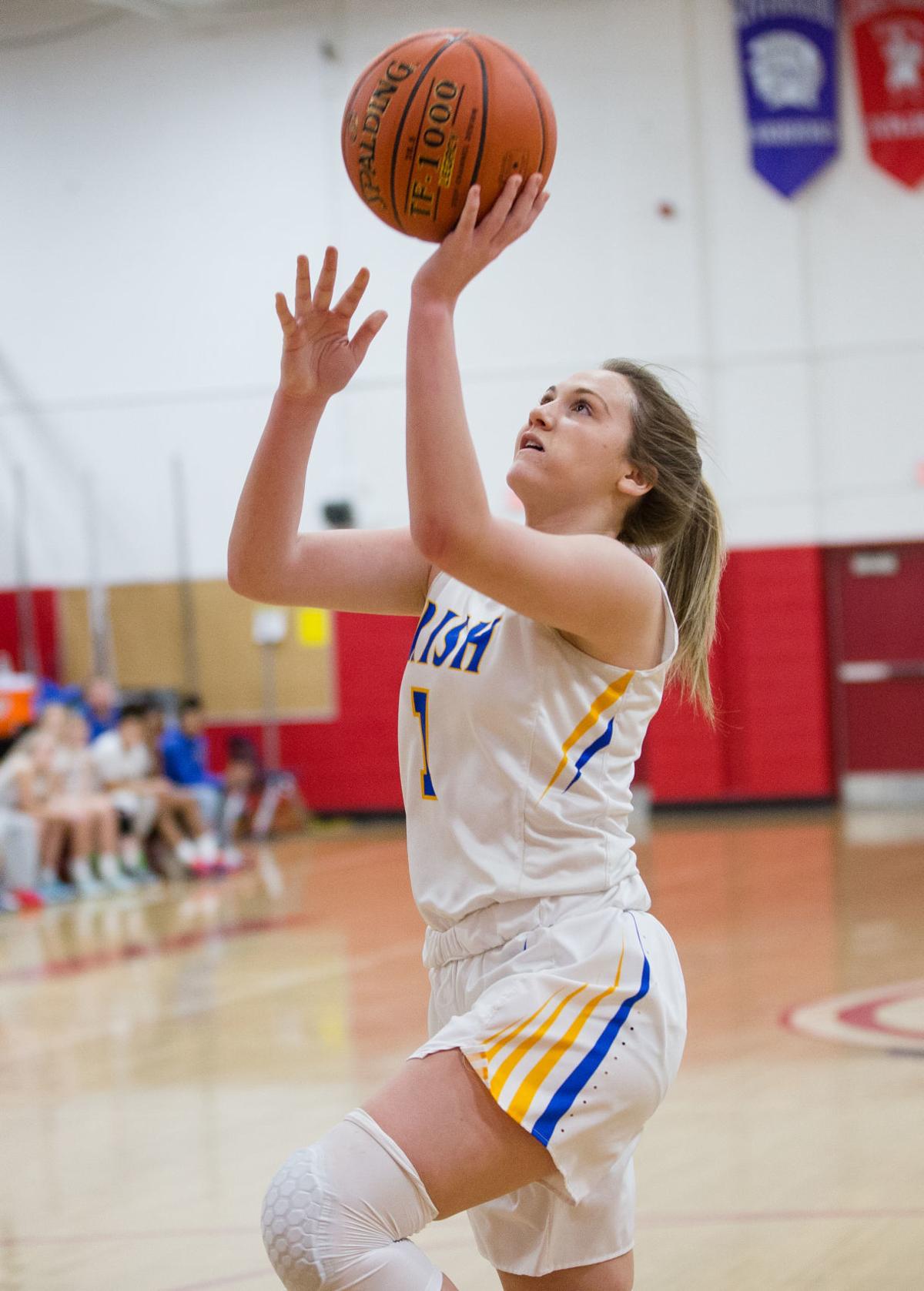 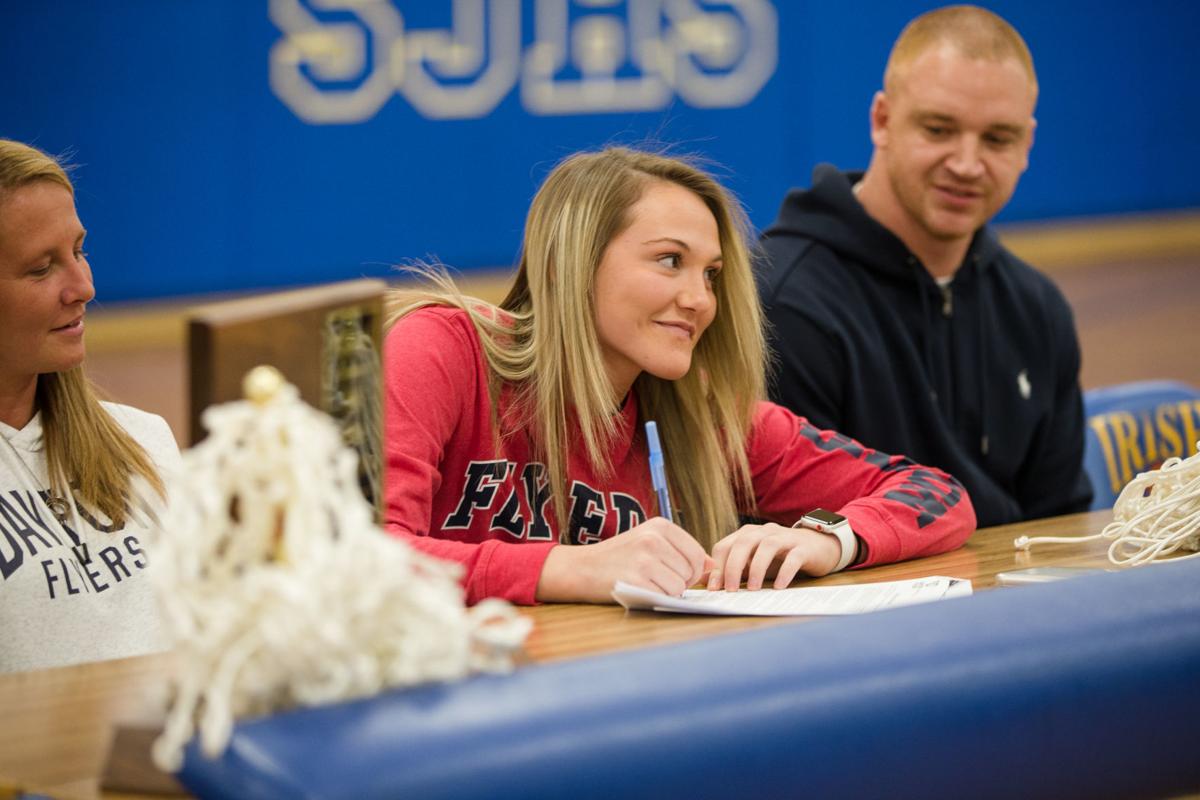 Fighting Irish girls basketball player Bailee Adkins signs her letter of intent to play for the University of Dayton on Tuesday, Nov. 19, 2019, at St. Joseph’s High School in Huntington. Adkins is the 2020 Herald-Dispatch All-Area Girls Basketball Player of the Year.

Fighting Irish girls basketball player Bailee Adkins signs her letter of intent to play for the University of Dayton on Tuesday, Nov. 19, 2019, at St. Joseph’s High School in Huntington. Adkins is the 2020 Herald-Dispatch All-Area Girls Basketball Player of the Year.

But as the heartbeat of the Irish, Adkins sacrificed those high point totals. Instead, she efficiently ran both the offense and defense. She sparked the Maxpreps.com nationally ranked team on a nightly basis with her 10 points, 7.3 assists, four rebounds and 4.3 assists per game.

“That’s my game and it always has been my game,” said Adkins. “And everyone knew their roles this year and I just ran the floor and tried to be the leader of the team.”

Adkins led the Irish to a 22-1 record as well as the top seed of and state championship favorite status in the W.Va. Class A state tournament.

Today, Adkins once again leads a group of highly talented players after she was voted the captain of the West Virginia Sports Writers Association’s Class A girls basketball All-State first team.

‘I am just honored to be named captain,” said Adkins. “I would not be here right now if it wasn’t for my teammates and family and coaches, I definitely thank them. I get a little lazy sometimes and my mom pushes me to work out to get better.”

2020 W.Va. Gatorade Player of the Year and junior teammate Grace Hutson benefitted from much of that hard work. The Irish’s first-year player shot her way onto the top team with her 19.5 points per game. She also filled up the stat sheet with her averages of 4.5 rebounds, two assists and 2.8 steals.

Though COVID-19 suspended the state tournament, the team expected to face St. Joe for the title — Parkersburg Catholic — also placed two representatives in senior Madeline and sophomore Leslie Huffman. Each played large roles as the No. 2 Crusaderettes advanced to the state semifinals after a win over Tucker County.

Madeline (14.2 ppg, 6.8 apg, 4.5 spg) possibly capped off her career with a Class A state tournament record 15 assists against the Mountain Lions. Leslie added to her Little Kanawha Conference Player of the Year honors after her 23 points against Tucker County lived up to her 19.6 ppg average. Leslie’s evolution from a defensive stopper into a complete player equipped the Crusaderettes with another weapon.

Joining the three sets are two final players from state tournament qualifiers. Gilmer County guard Trinity Bancroft’s 35 points helped rally her Titans past Kaylee Reinbeau’s Wheeling Central Maroon Knights during a state quarterfinal matchup. Despite a hamstring injury forcing her to miss four games, Reinbeau (19.5 ppg, 12.7 rpg) powered a Knights’ team dealing with many injuries throughout the season to the big dance. Bancroft proved as valuable to the Titans with averages of 16.7 points, 4.9 rebounds, and 2.2 steals.