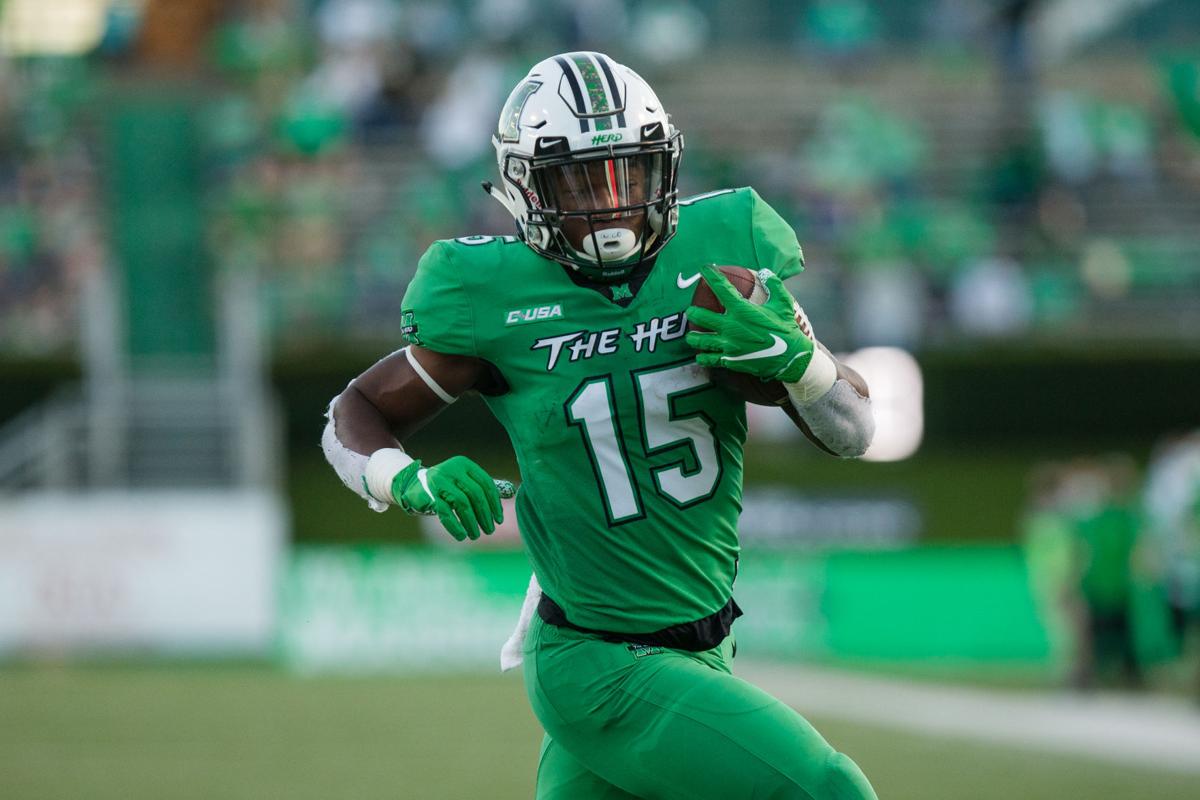 Marshall running back Knowledge McDaniel (15) breaks up field on a carry he would take in for a score against UMass during an NCAA football game on Saturday, Nov. 7, 2020, at Joan C. Edwards Stadium in Huntington, W.Va. 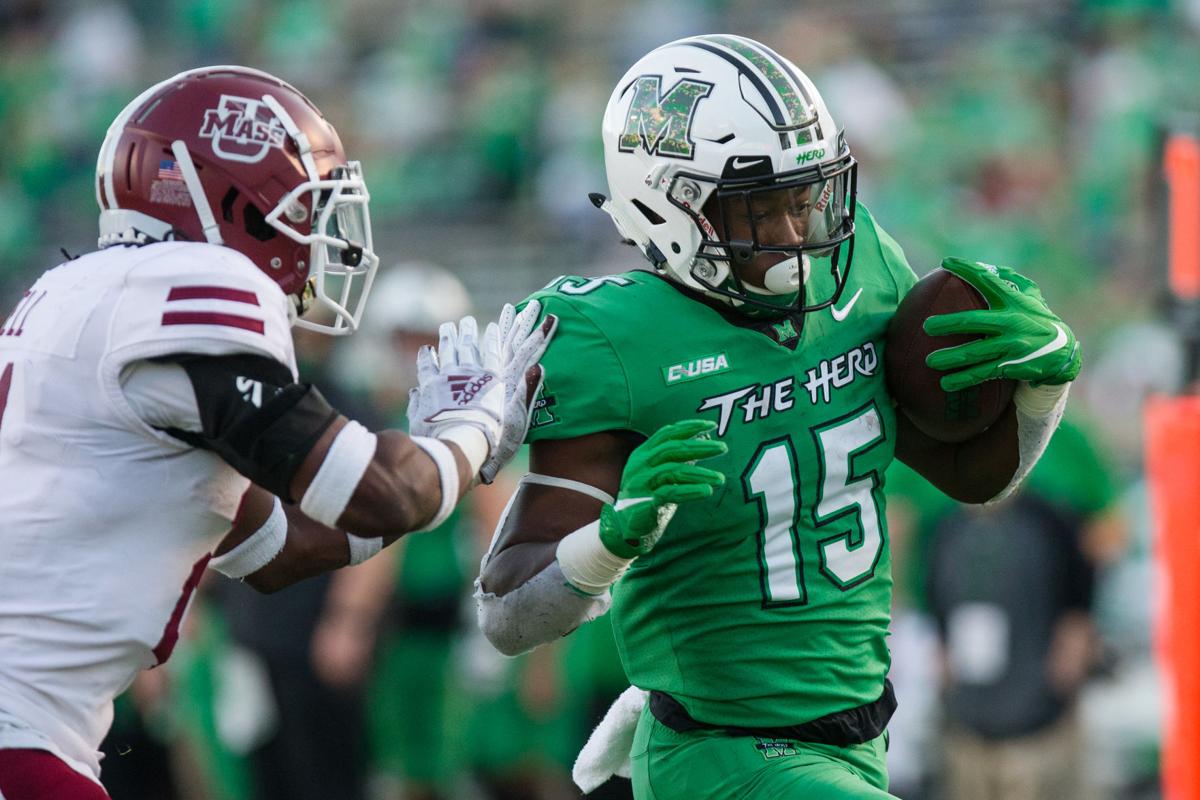 Marshall running back Knowledge McDaniel (15) speeds into the end zone for a score past UMass defender Te'Rai Powell (21) during an NCAA football game on Saturday, Nov. 7, 2020, at Joan C. Edwards Stadium in Huntington, W.Va.

Marshall running back Knowledge McDaniel (15) breaks up field on a carry he would take in for a score against UMass during an NCAA football game on Saturday, Nov. 7, 2020, at Joan C. Edwards Stadium in Huntington, W.Va.

Marshall running back Knowledge McDaniel (15) speeds into the end zone for a score past UMass defender Te'Rai Powell (21) during an NCAA football game on Saturday, Nov. 7, 2020, at Joan C. Edwards Stadium in Huntington, W.Va.

HUNTINGTON — Over the last two seasons, Marshall’s offense went as far as the legs of running back Brenden Knox took it.

That dynamic will change for 2021 with Knox gone and the uptempo scheme of head coach Charles Huff utilizing the passing game more.

There will be no running back logging 250 to 300 attempts per year, as was the case in the past two seasons for Knox.

The timing of the transition works out for the Herd with a limited amount of game experience involved in spring drills.

“A lot of it is new for them,” Marshall coach Huff said. “You’re tying in new coach, new system, new philosophy, new practice plan and I’ve only played a handful of plays in college football anyway.”

Sheldon Evans — the team’s most experienced returning back — is not a full participant in spring drills due to offseason procedures, so the young nucleus, which includes Rasheen Ali, Knowledge McDaniel and Lawrence Papillon, is getting to work learning the demands of the scheme.

Ali was impressive last season in limited action in fall camp and Papillon has also showed flashes during his time with the Herd.

However, in terms of in-game experience, the two logged a combined 15 carries last season, which means there’s not as much to unlearn from the old system.

Given that Huff has being directly involved with some successful running backs himself — New York Giants running back Saquon Barkley and Alabama’s Najae Harris immediately come to mind — and he has the expertise of Telly Lockette in the mix, too, it is a dynamic to watch moving forward.

Huff said seeing other guys step into bigger roles while learning the new scheme is one of the interesting aspects of spring ball.

“You see exactly what happens when you have a featured or premier guy at that position,” Huff said. “There’s a lot of guys behind him with talent that just didn’t get the experience. That’s what we see now. We’ve got Pop (Papillon), we’ve got Ali, we’ve got Knowledge right now that are working in. All have talent, but they don’t have the experience that a Knox would have or an Evans would have.”

According to reports, Ali performed well in Saturday’s first scrimmage of the spring, bursting for a touchdown and showing other flashes that could increase his role moving forward.

In terms of the offense, the running game is what will see the most change with backs seeing more open space in the wide-open scheme.

“The beauty of the system is, yes, we are going to up the tempo, we’re going to try to play a lot faster, we are going to push the ball down the field, but when you do that, it really opens up the running game,” Huff said. “So now, teams are not in the best position to play both.”

Those running backs will also be called on as pass-catchers and safety valves out of the backfield for quarterback Grant Wells, which gets them into space in one-on-one situations against the defense, too.

“I think the backs that we have here can be both — they can be a threat in the pass game and they can run the ball efficiently,” Huff said. “The one thing that I do know about these guys is that they don’t go down easily.”

The evolution of Marshall’s running game is one of the focal points of spring because of the change in dynamic from past years.

The talent within the room is undeniable, Huff said, but being able to build to the new way of play.

“For them, it’s not only understanding that this is a marathon and not a sprint,” Huff said. “They are gaining the experience needed to learn how to be consistent.”