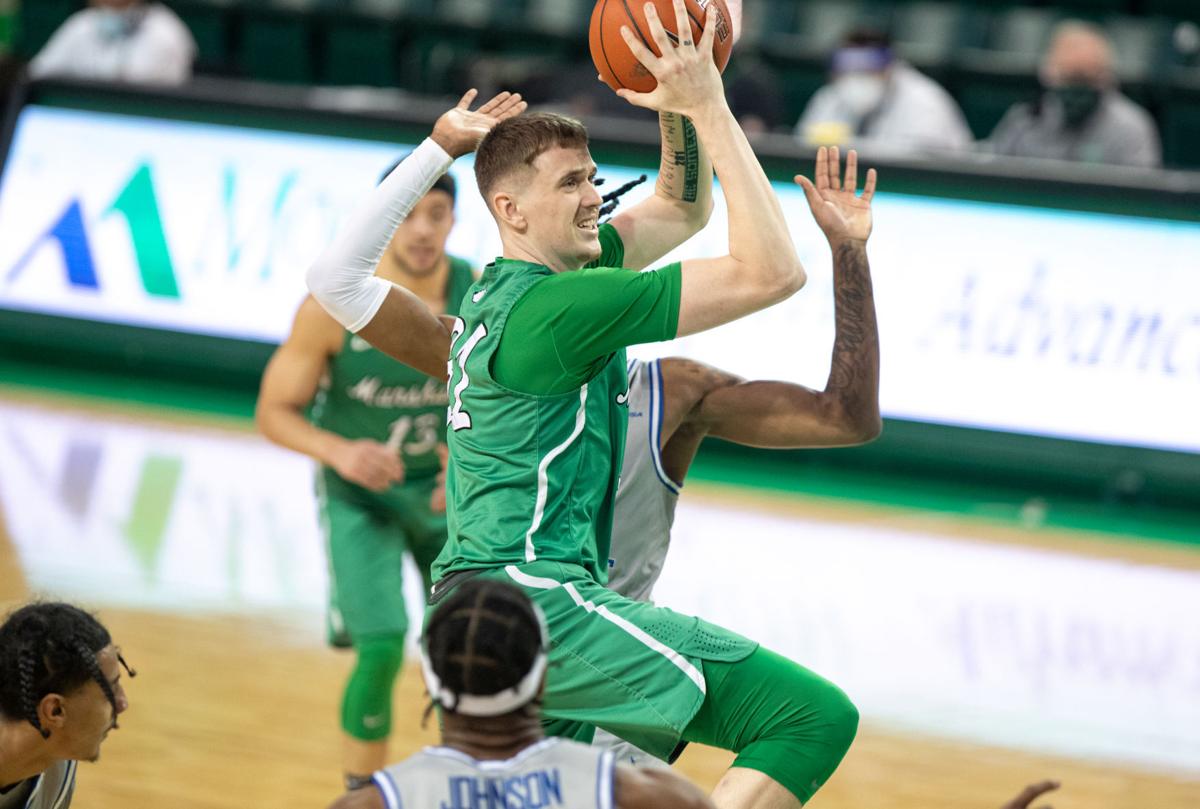 Marshall's Mikel Beyers (31) floats in a for a shot attempt during a Conference USA men’s basketball game against Middle Tennessee on Saturday, Feb. 13, 2021, at the Cam Henderson Center in Huntington. 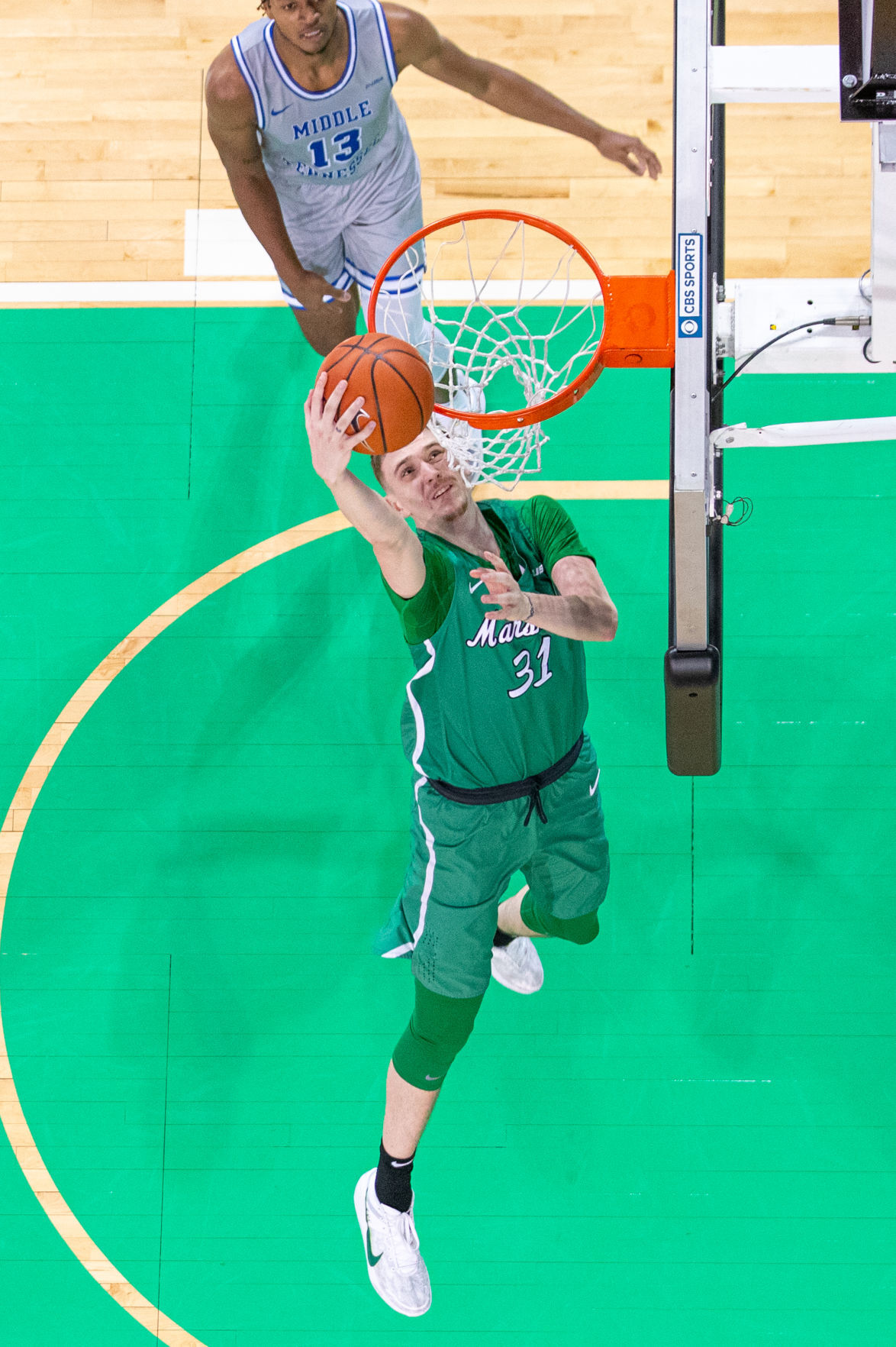 Marshall's Mikel Beyers (31) throws down a dunk during a Conference USA men’s basketball game against Middle Tennessee on Saturday, Feb. 13, 2021, at the Cam Henderson Center in Huntington.

Marshall's Mikel Beyers (31) floats in a for a shot attempt during a Conference USA men’s basketball game against Middle Tennessee on Saturday, Feb. 13, 2021, at the Cam Henderson Center in Huntington.

Marshall's Mikel Beyers (31) throws down a dunk during a Conference USA men’s basketball game against Middle Tennessee on Saturday, Feb. 13, 2021, at the Cam Henderson Center in Huntington.

HUNTINGTON — Ever since coming to Marshall, Mikel Beyers has had an eye out for Rice on the Herd’s schedule.

It might seem odd, considering that Rice and Marshall don’t have many common grounds.

Beyers is one of those common grounds, however. The Herd’s 6-foot-9 shooter is originally from Houston.

Even though he finished his high school career in Arizona, Beyers looks forward to any trip reuniting him with his birthplace.

This trip won’t be as Beyers imagined it to be when the schedule was released, however, with a combination of COVID-19 protocols and a massive winter storm wreaking havoc on the Herd’s series at Rice this weekend.

“I’m kind of bummed about that, but it’s definitely going to be good to be back in the city,” Beyers said.

Beyers’ trip to Houston was delayed a bit further on Wednesday, according to Marshall head coach Dan D’Antoni. The winter storm that knocked out power in much of Houston has pushed the Herd’s scheduled games back one day.

“We are not going to play Friday night,” D’Antoni said. “We’re going to play Saturday-Sunday, so we’ll be leaving out of here Friday morning.”

Conference USA released on Wednesday evening that Marshall’s Saturday game with Rice will be a 1 p.m. contest while Sunday’s is a noon matchup.

While disappointed, Beyers said that the winter storm doesn’t change any family plans much because COVID-19 protocols at Rice were already going to keep them from seeing the games this weekend.

“It turns out Rice wasn’t having fans anyway, so it’s not like they were going to be able to come even if there wasn’t a snowstorm,” Beyers said.

Beyers did say that the snowstorm’s impact on Texas is unlike anything he’d seen in his home state, though.

“The whole state of Texas is frozen,” Beyers said. “There’s nothing we can really do about it — just got to roll with the punches.”

Weather forecasts continue to have Houston in the upper 30s through Thursday before things start to warm up slightly over the weekend with the highs getting back in the high 40s to mid-50s.

While things in Texas aren’t great, things in Huntington haven’t been exactly ideal for the Herd basketball team, either.

D’Antoni said he had a milestone that he never wanted to experience on Tuesday afternoon due to the winter storm and the ice and snow left behind.

While his team practiced, D’Antoni was at his house on the hill in Barboursville without a way to initially get to Huntington.

That doesn’t mean D’Antoni didn’t monitor the team’s progress, though. He was filled in as soon as he made it in on Wednesday.

“From all accounts — players, staff — it was a good practice,” D’Antoni said. “They were energetic and I didn’t expect anything different. From what I understand, we got that type of result with this team because that’s who they are.”

Beyers, who is averaging 7.8 points and 2.6 rebounds per game this season, said the team took the changes in stride — as they have with all the COVID-19 changes this season.

When it comes down to it, this weekend is about business against a Rice team that will play a style similar to the Herd’s.

Beyers also pointed out that there are only three weeks remaining before the Conference USA tournament in Frisco, Texas, so each weekend is crucial for the Herd to reach its goals.

“Yesterday, we really just locked in and we ran through some of their plays, their sets, watched some film on what they do and got a lot of shooting and conditioning — just trying to stay ready for this weekend,” Beyers said.

On Wednesday, Marshall head coach Dan D'Antoni said Marshall's series with Rice in Houston this weekend was moved to Saturday and Sunday due to a winter storm that has hindered the state of Texas.

Conference USA confirmed on Wednesday evening that Saturday's contest will be a 1 p.m. game while Sunday's is a noon contest.