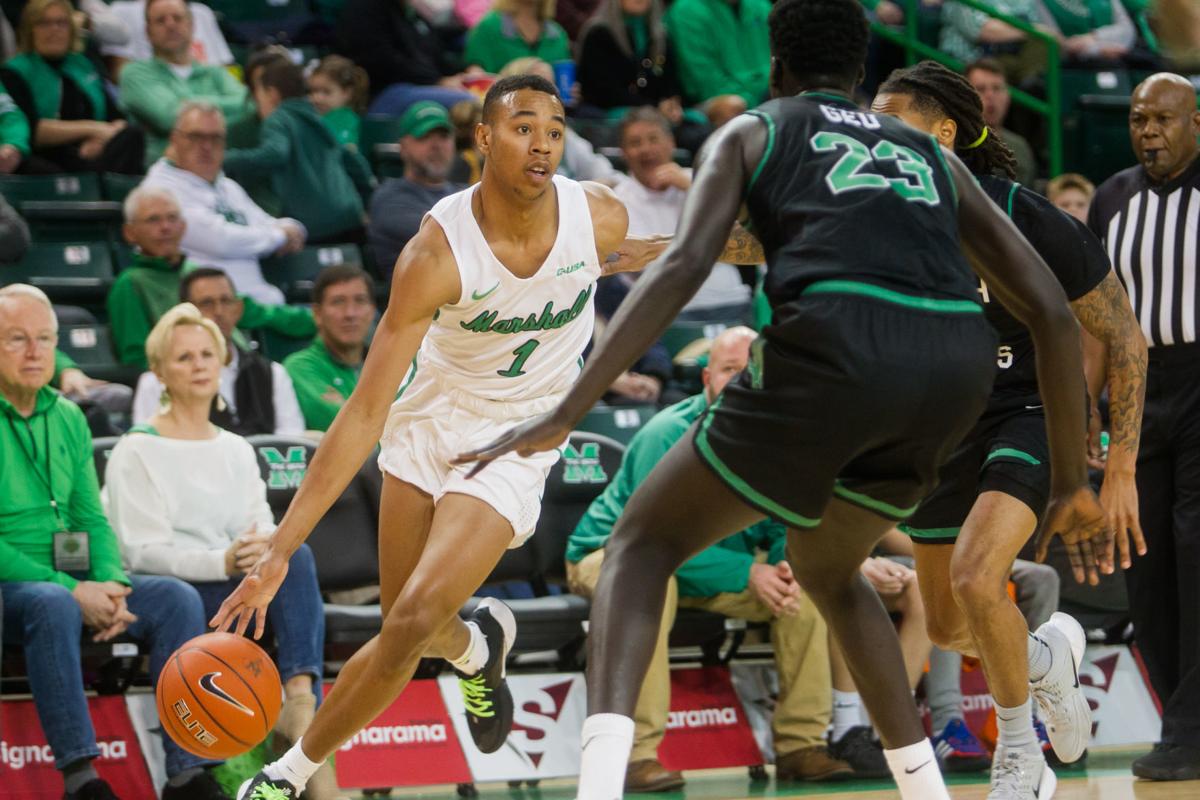 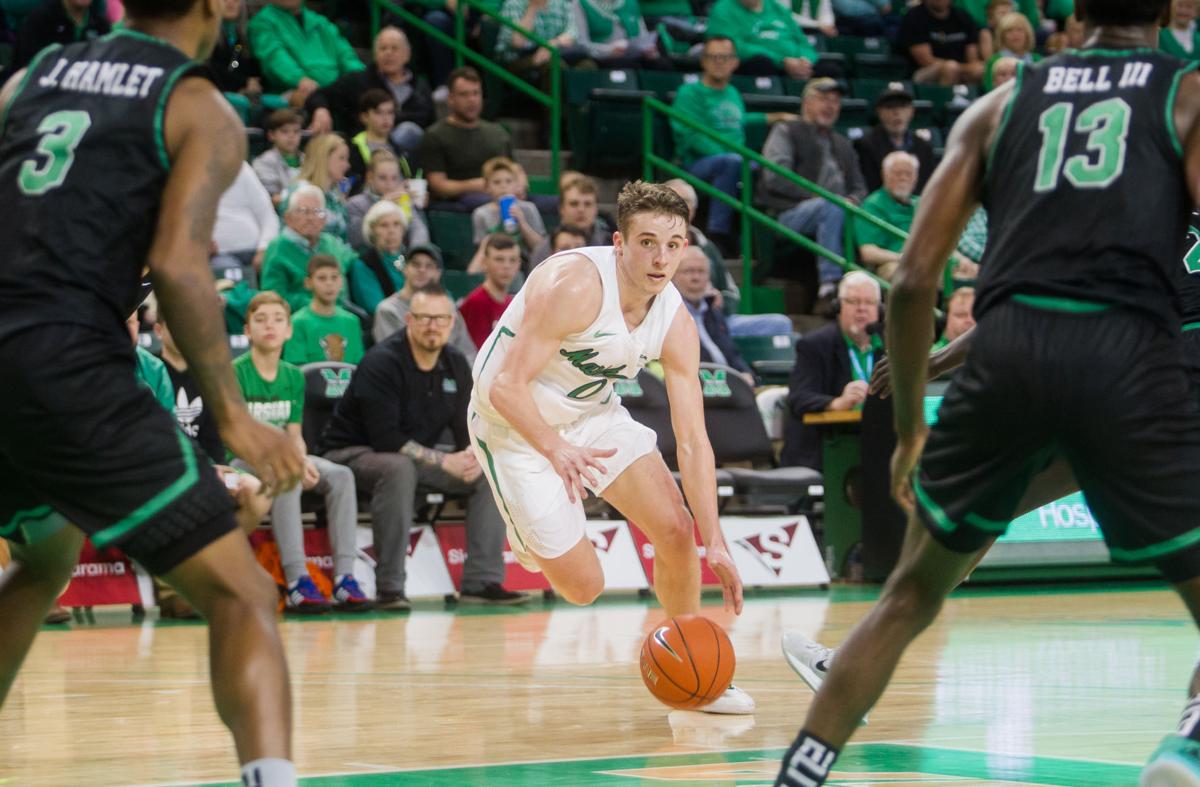 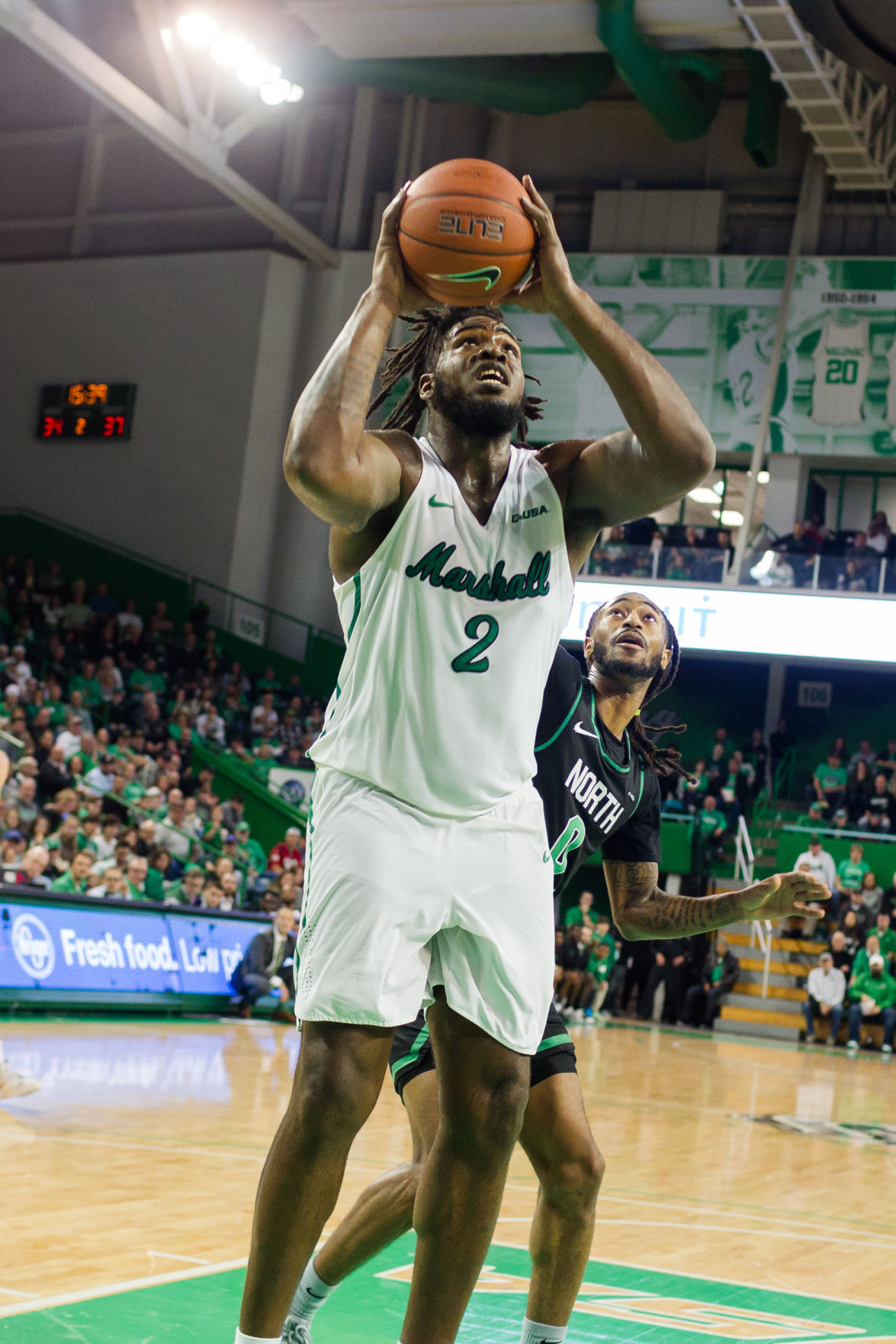 The Herd’s Iran Bennett (2) goes up to shoot as the Marshall University men’s basketball team faces off with North Texas on Saturday, January 4, 2020, at the Cam Henderson Center in Huntington.

The Herd’s Iran Bennett (2) goes up to shoot as the Marshall University men’s basketball team faces off with North Texas on Saturday, January 4, 2020, at the Cam Henderson Center in Huntington.

HUNTINGTON — As has been the case all season, no Conference USA basketball series is certain to be played.

Marshall has seen that with a trio of postponements and cancellations within its conference slate.

However, if the Herd and North Texas are able to meet this weekend in Huntington, Marshall coach Dan D’Antoni knows a couple things are certain.

No. 1, there will be a ton of Kelly green in the Cam Henderson Center. No. 2, there will also be a lot of talent on the basketball floor, as well.

North Texas currently leads Conference USA’s West Division as it gets set for the weekend trip to Huntington.

“Defensively, they are a good team because they play hard and they are going to be physical,” D’Antoni said. “It’s just a good ballclub that plays hard — coach has them playing hard — and they ring the basket with four shooters and one guy playing in, like almost everyone does. We saw them last year.”

On Monday, North Texas (12-6, 8-2 C-USA) was listed as one of two Conference USA teams to make the NCAA Tournament, according to predictions by CBS Sports’ Jerry Palm, who also had Western Kentucky in the field.

Currently, Marshall leads Conference USA in the NET rankings, which are used as a measuring tool for the NCAA Tournament committee in determining the strength of a team.

As of Monday, Marshall is No. 69 while North Texas is No. 73, making this weekend’s series crucial for both teams, who are each looking to get key wins.

For Marshall, the home wins would be considered ‘Quad 2’ wins, which are wins against teams ranked Nos. 31 to 75 in the Ratings Percentage Index (RPI) on your home floor.

However, for North Texas, road wins at Marshall would be considered ‘Quad 1’ because for road teams, Quad 1 is defined as teams ranked Nos. 1 to 75 in the RPI.

That means the games will not only go a long way in the Conference USA standings, but still could loom large if either team sweeps the weekend, which could aid in conversation on a potential at-large berth.

Last season, North Texas came to Huntington and earned a 67-64 win in Marshall’s second Conference USA game of the season.

At the time, Marshall post players Jannson Williams and Mikel Beyers were struggling to hit shots, so the Herd went with a lineup of Iran Bennett and Goran Miladinovic down low in the loss.

D’Antoni said this year’s contest with the teams will look much different from a matchup standpoint with Williams and Beyers on the floor.

“When we played them, Jannson and Mike weren’t playing much,” D’Antoni said. “That was at a time where they couldn’t throw it in the ocean. I think Jannson played 12 minutes and Mike played three, maybe. The game was in the 60s.”

As of now, both teams are also in the mix for byes in the first round of the Conference USA Tournament, which adds to the importance moving forward for each.

With the C-USA Tournament scheduled for March 10-14 in Frisco, Texas, there are only two conference weekends left for teams to solidify their place in the standings.

The weekend matchups — Friday at 7 p.m. and Saturday at 2 p.m. — will have a resonating effect on not only each team, but all of Conference USA, which puts those games in the spotlight.

After missing last weekend’s games due to cancellations/postponements, both teams should be fresh and eager to get back on the court.