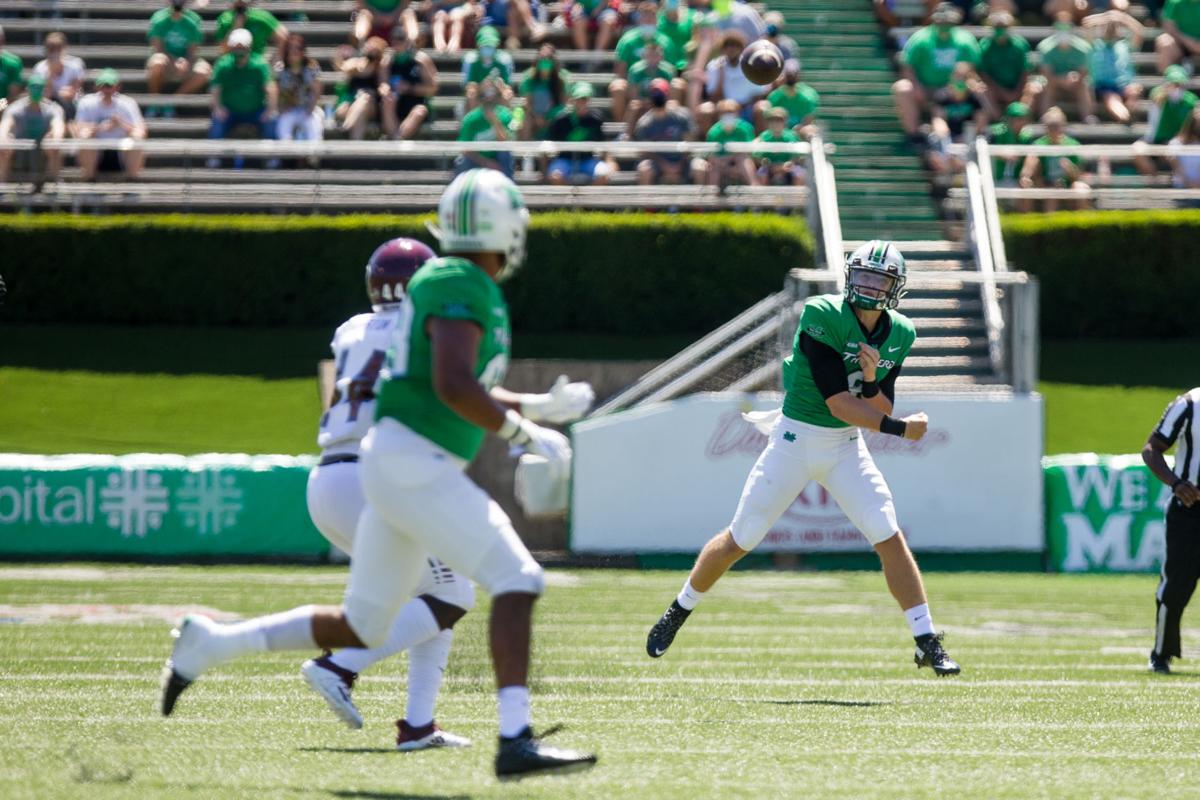 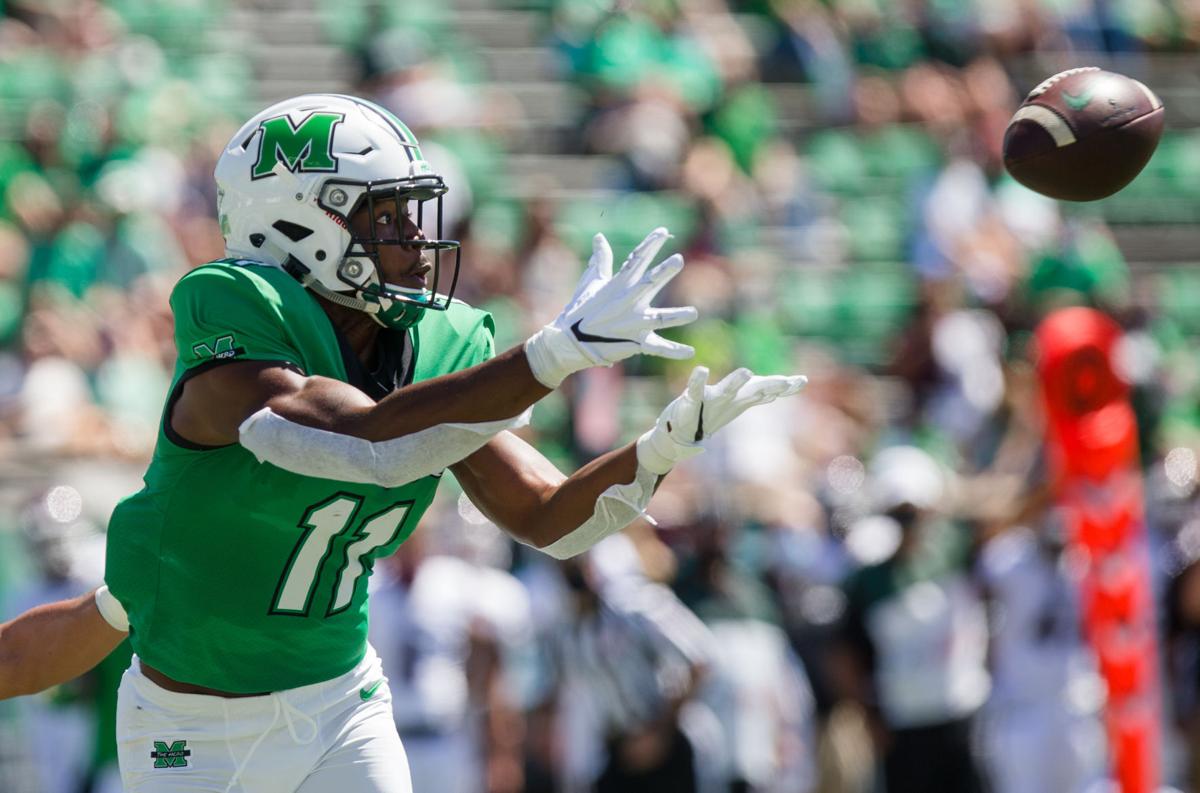 HUNTINGTON — Over the last two months, the one major question surrounding Marshall football centered on how new starting quarterback Grant Wells would fare.

“I told you guys early on, I’ve got great confidence in Grant,” Marshall head coach Doc Holliday said. “I saw the same thing out there today that we see every day in practice. He made some tremendous throws, and the critical thing is he took care of the football.”

Wells’ performance was one for the record books as he finished 16 of 23 for 307 yards and four touchdowns in the win.

Those numbers marked the most passing yards in a debut performance for a Herd quarterback, breaking the old record of 292 yards set by Stan Hill in a win over Miami (Ohio) on Nov. 12, 2002.

Wells said he was unaware of the record prior to being told in the postgame, but said it was an honor, considering Marshall’s quarterback lineage.

“That’s awesome to be mentioned in the same sentence or stats as the guys that came before me because I know Marshall has a rich history of quarterbacks,” Wells said. “I didn’t know that before just now, so that’s pretty cool.”

Of Wells’ 307 passing yards, 280 came in the first half as he distributed the ball well to receivers.

After choosing to receive the opening kickoff, Marshall’s offense didn’t take long to net Wells the first touchdown pass of his collegiate career.

Wells stepped into the pocket and delivered a strike over the middle to Marshall tight end Xavier Gaines, who caught the ball in stride after beating a safety to the inside.

Gaines, who came to Marshall as a quarterback himself, said it was special to snag that first touchdown pass from Wells.

“I’m glad I got the opportunity to make that play for him,” Gaines said. “It was very important for me, to be honest with you.”

That initial drive got Wells into a rhythm that never really went away on the afternoon as his first four scoring drives went for at least 65 yards with all ending in touchdowns.

The 6-foot-2, 210-pound redshirt freshman added touchdown passes to Talik Keaton, Garet Morrell and Jaron Woodyard in the first half before giving way to Luke Zban in the third quarter.

Zban also came in and worked the offense for two touchdown drives, including his first career touchdown pass, to tight end Amir Richardson — a fellow in-state product — with 4:02 left. Zban was 6 for 6 passing.

Offensively, Marshall never punted in the contest, moving the ball at will on Eastern Kentucky, which was in its first game under head coach Walt Wells.

Herd backup running back Knowledge McDaniel led the way with 93 yards on the day while starting running back Brenden Knox finished with 85 yards and a touchdown on 18 carries. Sheldon Evans also had a touchdown for Marshall.

Linebackers Tavante Beckett and Eli Neal each led the Herd with eight tackles while Nazeeh Johnson secured the Herd’s first interception of the year.

Beckett said the ability of the Herd to finish out the shutout was important because it was a total team effort with the second- and third-string players getting some repetitions.

“I voiced it to them — ‘Keep that zero on the board’ — because it was important to us,” Beckett said. “It’s always good for a defense to get a shutout. They took advantage and went out there and make plays. A lot of them were waiting on their chance to go show Coach something.”

While most of the attention was on Wells’ big day, it was Wells who said the defensive performance is what deserved the most praise.

“I’ve been going against the best defense in Conference USA,” Wells said. “That really helped this game slow down when I was going against someone in a different color (uniform). Like I said, our defense really showed out today — probably more than our offense.

“I have to say, putting up zero points is pretty hard. It’s a pretty good feeling when you have the ball and the other team has zero points.”

Holliday said Marshall’s team will take a couple days off from practice before getting back to work in preparation for the team’s next scheduled game, which is a Sept. 19 matchup with Appalachian State at Joan C. Edwards Stadium.

Marshall takes on Eastern Kentucky during a NCAA football game on Saturday, Sept. 5, 2020, at Joan C. Edwards Stadium in Huntington.

Marshall University has had a run of quarterbacks … who weren’t runners. Odd, but true. That’s what makes new Thundering Herd starting quarterback Grant Wells so intriguing, so interesting and, yes, so unique.

Herd had few mistakes in opening win over EKU

For a team that hadn't played in nearly seven months, Marshall certainly looked like it was ready for Saturday's season opener. The Herd made few mistakes in a 59-0 win over Eastern Kentucky.

Former MU star roots against Herd for one day