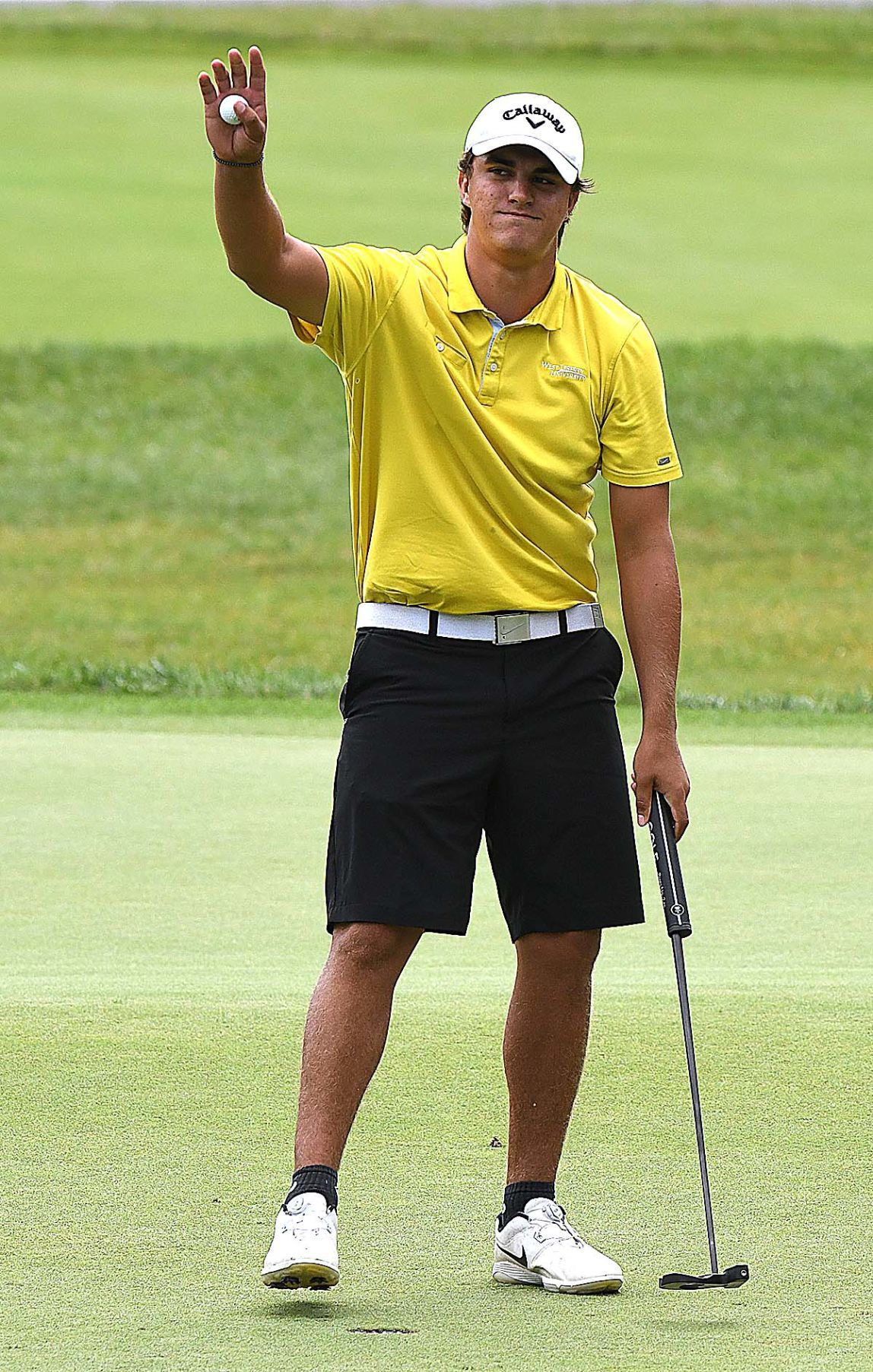 Alex Easthom, of Ravenswood, waves after winning the West Virginia Amateur Championship on Friday, July 31 on the Old White TPC course at The Greenbrier resort in White Sulphur Springs, W.Va. 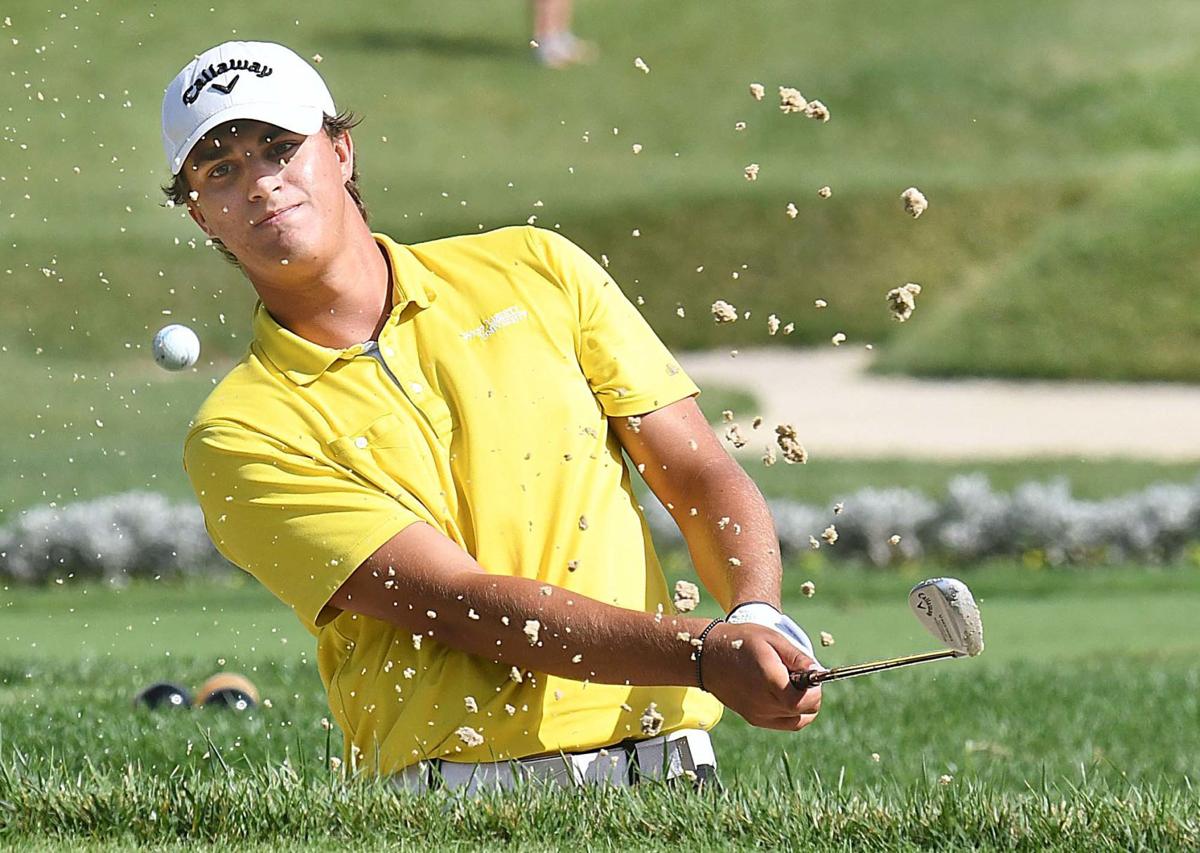 Alex Easthom, of Ravenswood, hits fro the trap on the par 5, 17th hole during the WV State Amateur Golf Tournament held on the Old White Coarse at The Greenbrier Resort. (Rick Barbero/The Register-Herald) 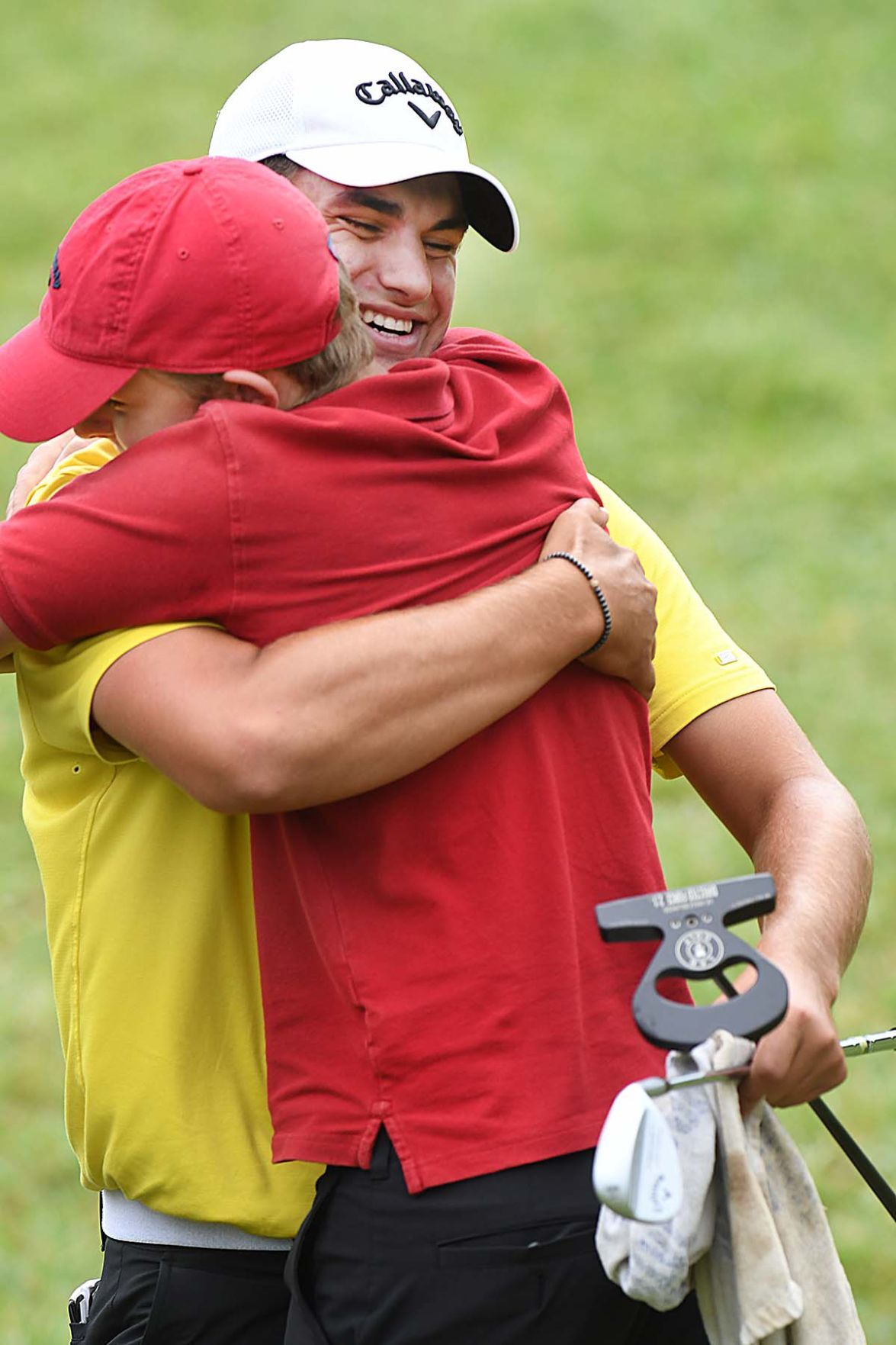 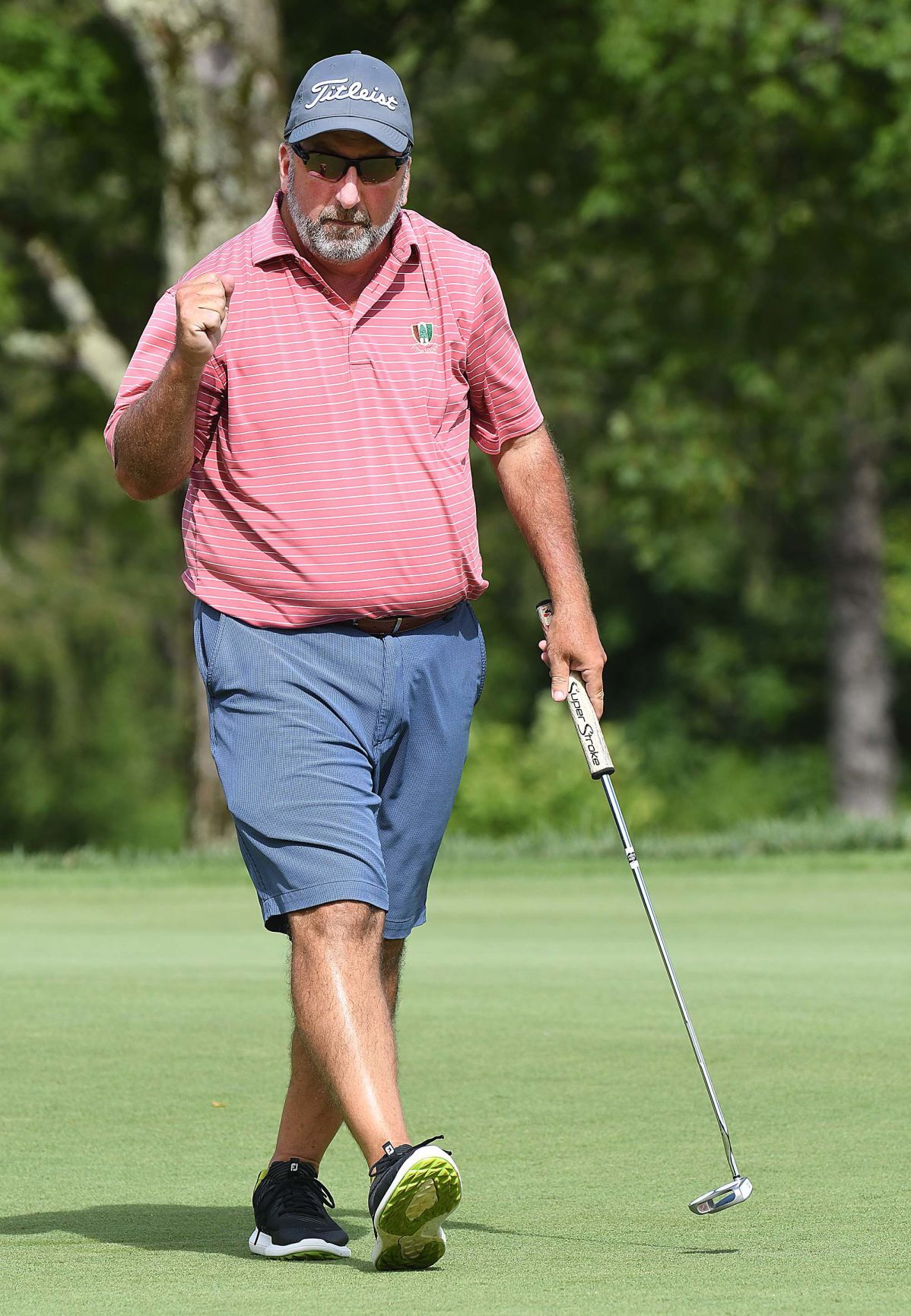 Pat Carter, of Scott Depot, reacts after sinking a birdie putt on the Par 5, 17 hole during the WV State Amateur Golf Tournament held on the Old White Coarse at The Greenbrier Resort. (Rick Barbero/The Register-Herald) 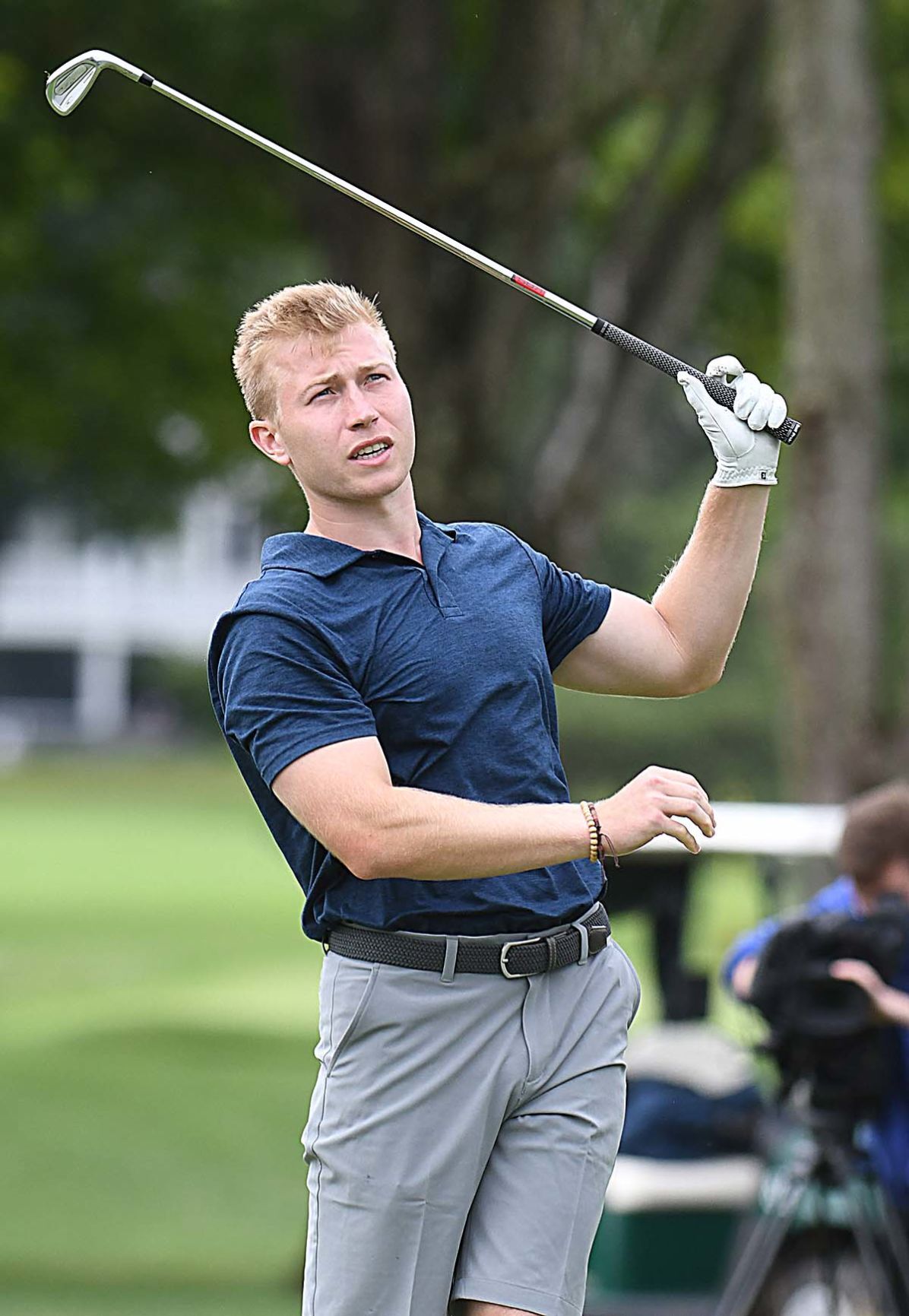 Mason Williams, of Bridgeport, hits his tee shot on the par 3, 18th during the WV State Amateur Golf Tournament held on the Old White Coarse at The Greenbrier Resort. (Rick Barbero/The Register-Herald)

Alex Easthom, of Ravenswood, waves after winning the West Virginia Amateur Championship on Friday, July 31 on the Old White TPC course at The Greenbrier resort in White Sulphur Springs, W.Va.

Alex Easthom, of Ravenswood, hits fro the trap on the par 5, 17th hole during the WV State Amateur Golf Tournament held on the Old White Coarse at The Greenbrier Resort. (Rick Barbero/The Register-Herald)

Pat Carter, of Scott Depot, reacts after sinking a birdie putt on the Par 5, 17 hole during the WV State Amateur Golf Tournament held on the Old White Coarse at The Greenbrier Resort. (Rick Barbero/The Register-Herald)

Mason Williams, of Bridgeport, hits his tee shot on the par 3, 18th during the WV State Amateur Golf Tournament held on the Old White Coarse at The Greenbrier Resort. (Rick Barbero/The Register-Herald)

WHITE SULPHUR SPRINGS, W.Va. — On Friday, a Hilltopper reached the mountain peak in terms of golf in the state of West Virginia.

And what a rocky, rainy, wild climb to the summit it was.

West Liberty’s Alex Easthom, a former standout at Ravenswood, stared down hard charges from defending champion Mason Williams, Chris Williams and 13-time winner Pat Carter, coming up with crucial up-and-down pars on the back nine in hanging on to claim the Greenbrier Trophy as the winner of the 101st West Virginia Amateur at The Greenbrier Resort.

Easthom finished with a four-round total of 4-under 276, edging Chris and Mason Williams at 3-under and Carter at 2-under. Easthom was the only player in the field to shoot even-par or better in all four rounds and used one, last sand save on the 18th hole of the Old White TPC to seal the deal.

“It means everything,” Easthom said. “I’ve wanted to play with (Carter) since I started playing in this tournament when I was 15. To meet him was great, to play two rounds with him was awesome and to battle with him down the stretch, you couldn’t write it up better.”

Carter, who entered the day as the co-leader with Easthom at 3-under, was certainly part of the story, but the drama began to unfold before either had even teed off on the first hole.

Mason Williams started with a birdie at the first and seemed poised to pull off a repeat of a year ago when he started the final round six strokes behind only to rally and win in a three-man playoff. This time around, Mason Williams was five behind, but he made that up quickly and after additional birdies at the fifth, seventh and ninth holes, he was tied for the lead at 2-under.

“I played a hell of a round of golf today,” Mason Williams said. “Through everything we’ve been through this week — I made three doubles and a nine — to be able to put that behind me and move forward, I’m proud of myself for doing that.”

Minutes after Mason Williams birdied nine, Easthom registered a birdie on No. 7 to go back up a shot at 3-under and then, the rains came. Play was delayed one hour and 38 minutes.

Upon resuming at 2:28 p.m., Easthom’s tee shot on the par-3 eighth hole went right, setting up a pitch and putt to save par. Another par save from left of the green on the ninth kept him atop the leaderboard.

Then, on the driveable par-4 10th, Easthom came up with one of the day’s two best shots, hitting a 5-wood to three feet on the 293 -yard hole and he finished it off for eagle. A draw iron around a tree from the rough on the par-4 11th finished with a 13-foot birdie putt and suddenly, he was up four shots and at 6-under for the tournament.

After the rain delay, Easthom admitted to doing a little scoreboard watching and that helped make some of his decisions down the stretch.

“I started looking about No. 8 green,” Easthom said. “I wanted to know where they were at because 10 was driveable and I wanted to make a good call on that hole. I knew I needed to get some scores in because Chris and Mason were just birdieing everything it seemed.”

Chris Williams, who like Mason Williams started the day at 2-over and five shots back, turned at 2-under 32 and played a nearly flawless back nine, picking up birdies at 12, 16 and 17. A birdie putt on 18 just slipped past the hole and would’ve forced a playoff. Though Williams, who has played in the final group in both the West Virginia Amateur and West Virginia Open, had no idea.

“I didn’t look at it one time, none,” Chris Williams said. “I was in a good zone, making birdies and making putts and I was just going to play my best. Knowing where they are isn’t going to change how I’m playing anyway.”

Mason Williams birdied 14 and 18 while a bogey at 16 ended up being the death knell for his chances.

And he saved the best for last after driving into the back left bunker. With a big gallery of remaining players watching, his pitch found the top of the thumbprint and rolled down to within two feet. After Carter bogeyed, a tap-in wrapped things up.

“That one was more nervy,” Easthom admitted. “But the difficulty of it put me more at ease, because you knew all you could do is chop down on this ball and where it goes is where it goes. You don’t have much control of it. Honestly, I couldn’t mess it up because it was so hard. It was an extremely tough shot and I definitely wouldn’t want it again to win something like this, but it worked out.”

Easthom, who shot 100 in the final round of the West Virginia Amateur four years ago, is now a part of golf history in the Mountain State forever.

As is Carter, who’s bid for a 14th Amateur win to move within one of World Golf Hall of Famer William C. Campbell came up just short.

At age 52, each close call hurts a little worse and that’s something he admitted in the aftermath.

“Obviously, the weather was not conducive to me today,” Carter said. “But I grinded it out, didn’t give up and had a chance at the end with a birdie to get into the playoff. But my hat’s off to Alex and the rest of the guys that played well.”

Jackson Hill of Daniels, the third member of the final pairing finished fifth at even for the tournament. Hurricane’s Sam O’Dell, a four-time Amateur champion finished at 1-over to place sixth with a four-way tie for seventh between Hedgesville’s Owen Elliott, Fairmont’s Jess Ferrell, Follansbee’s Ryan Bilby and Huntington’s Cam Roam rounding out the top 10.