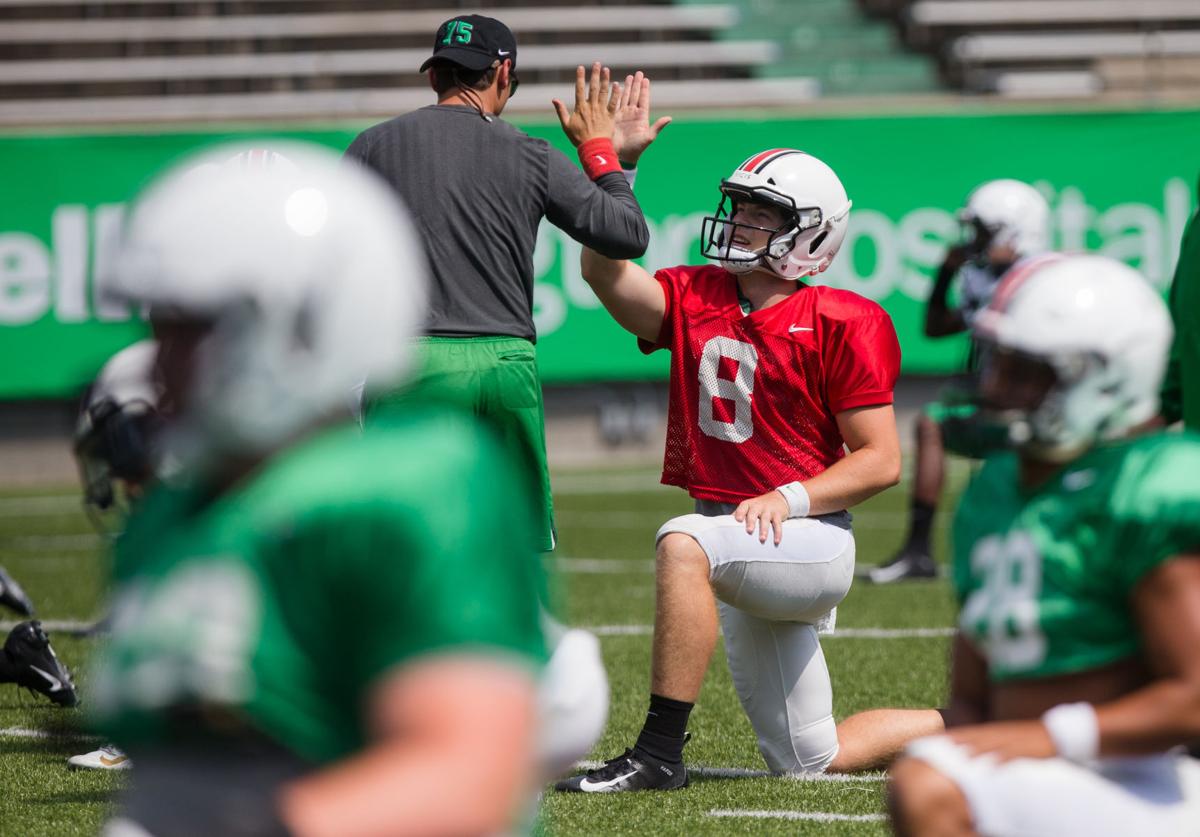 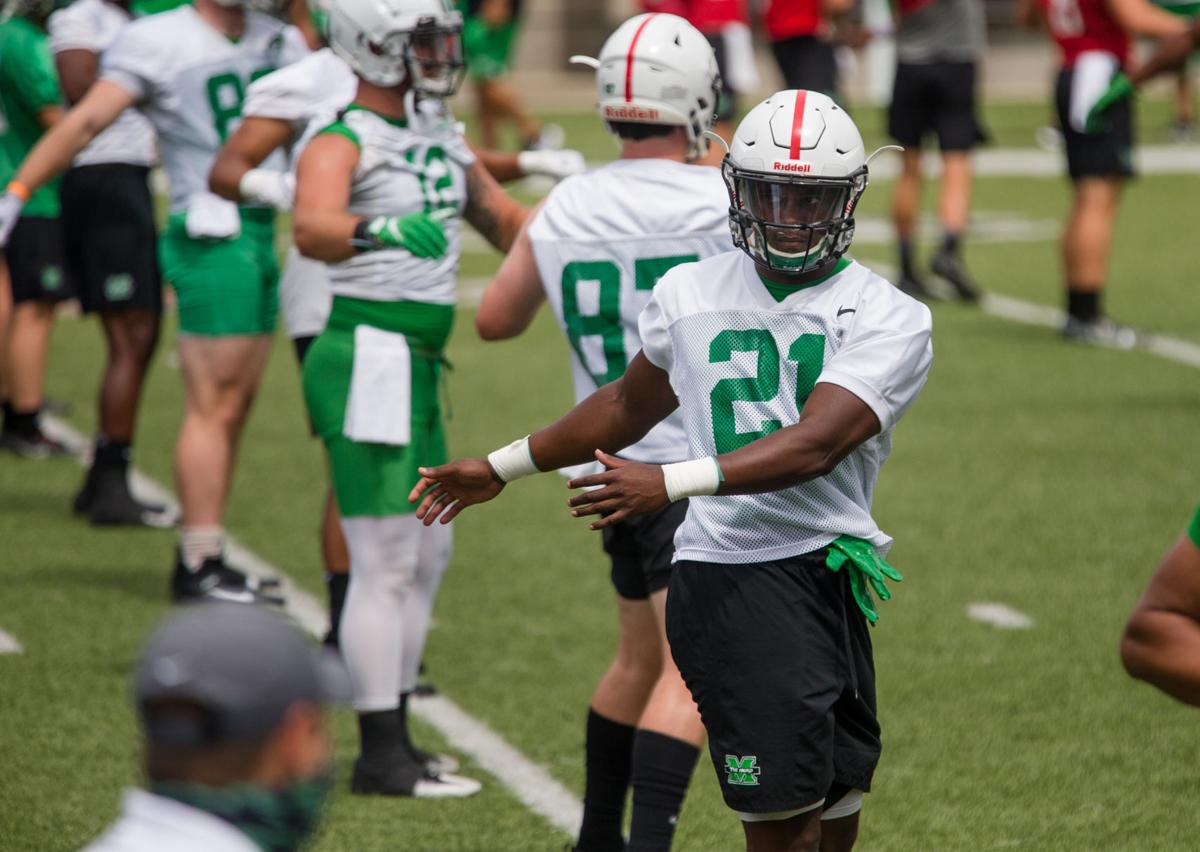 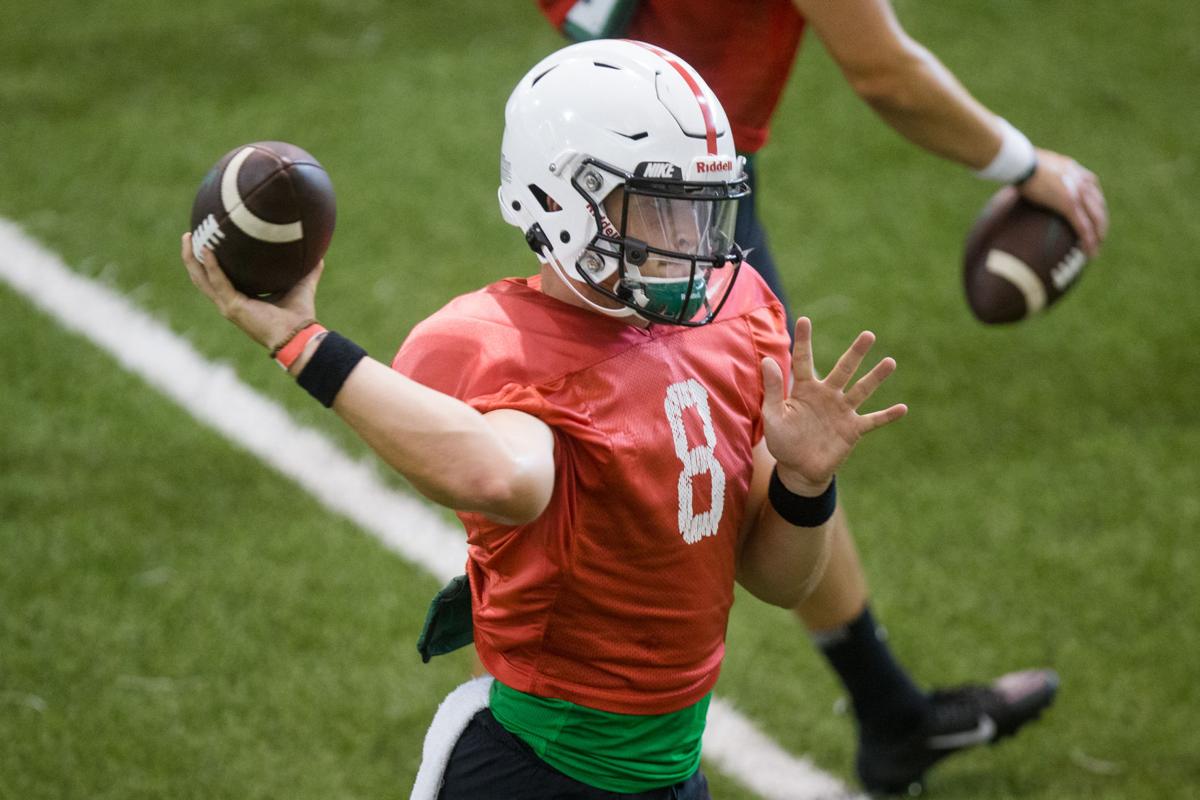 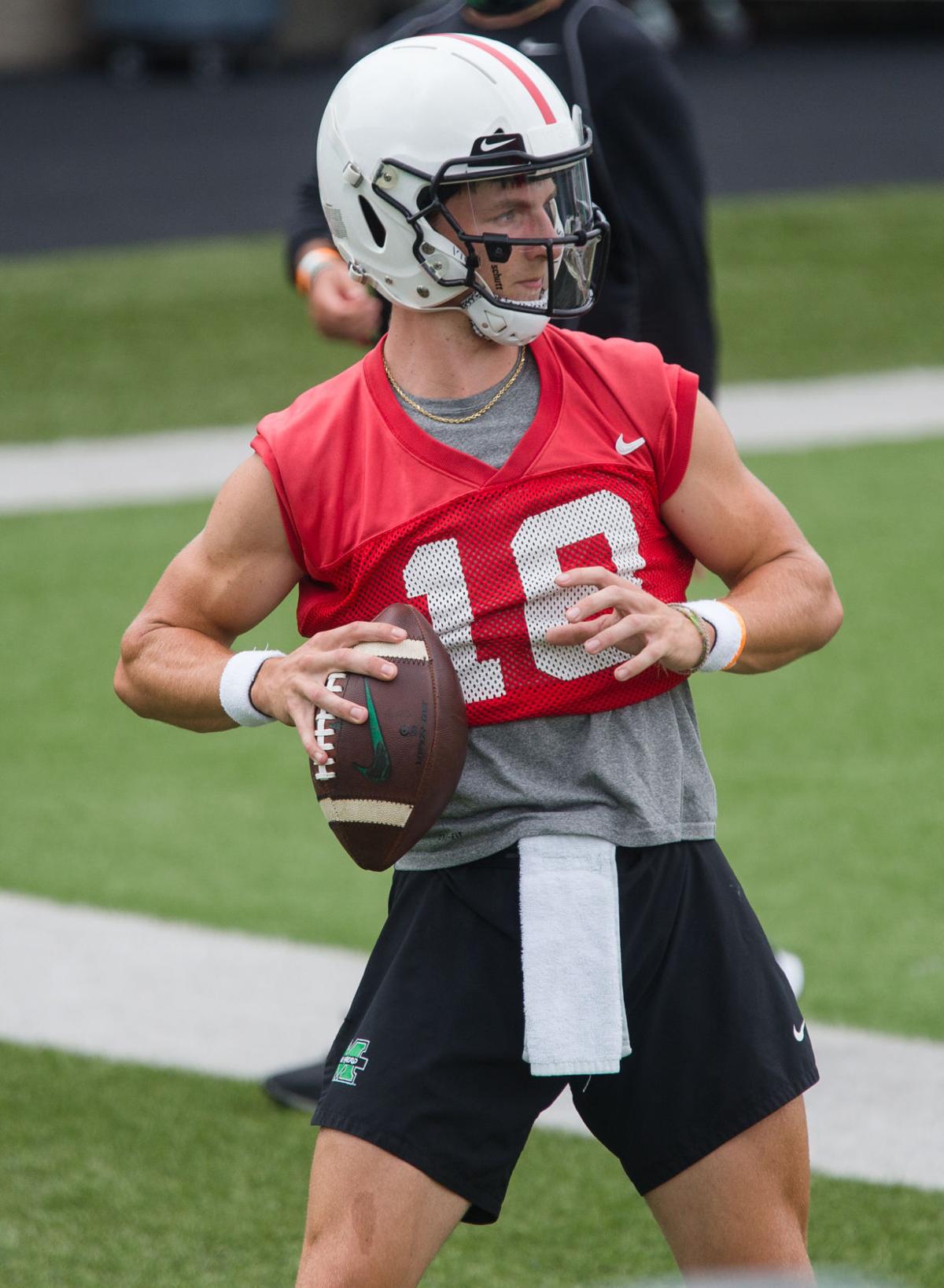 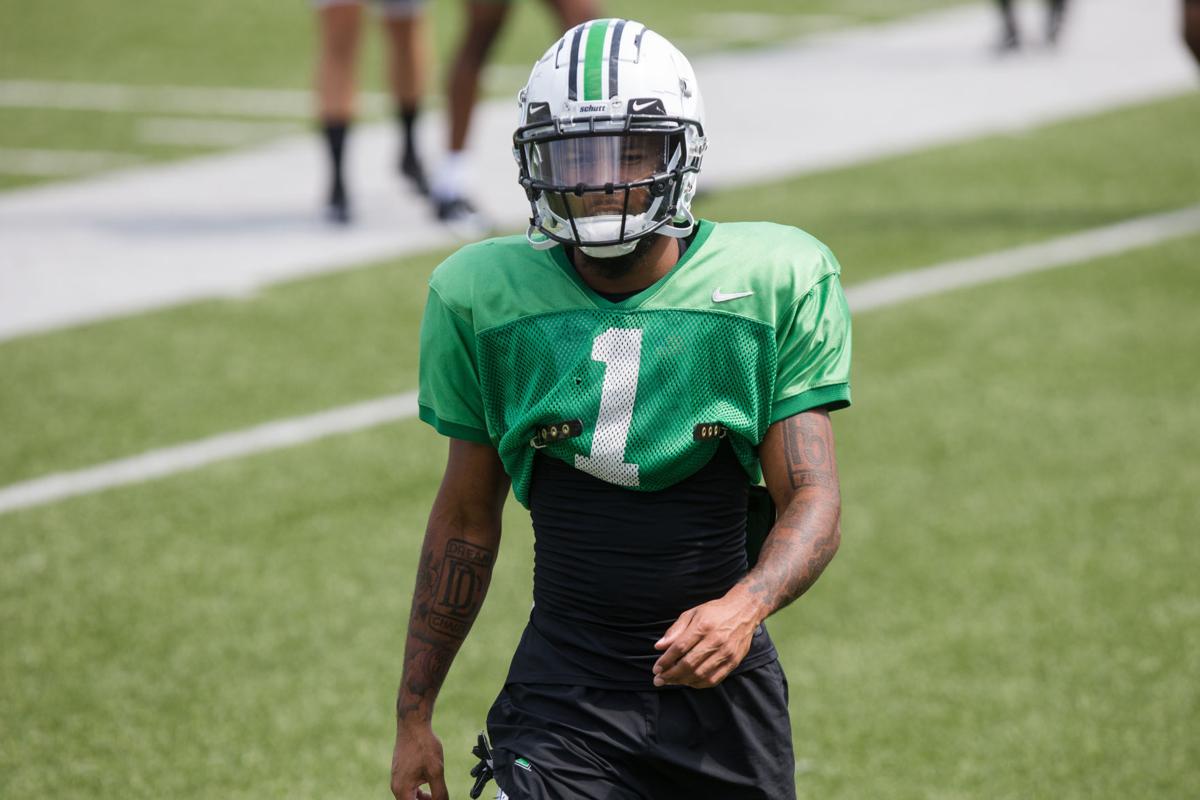 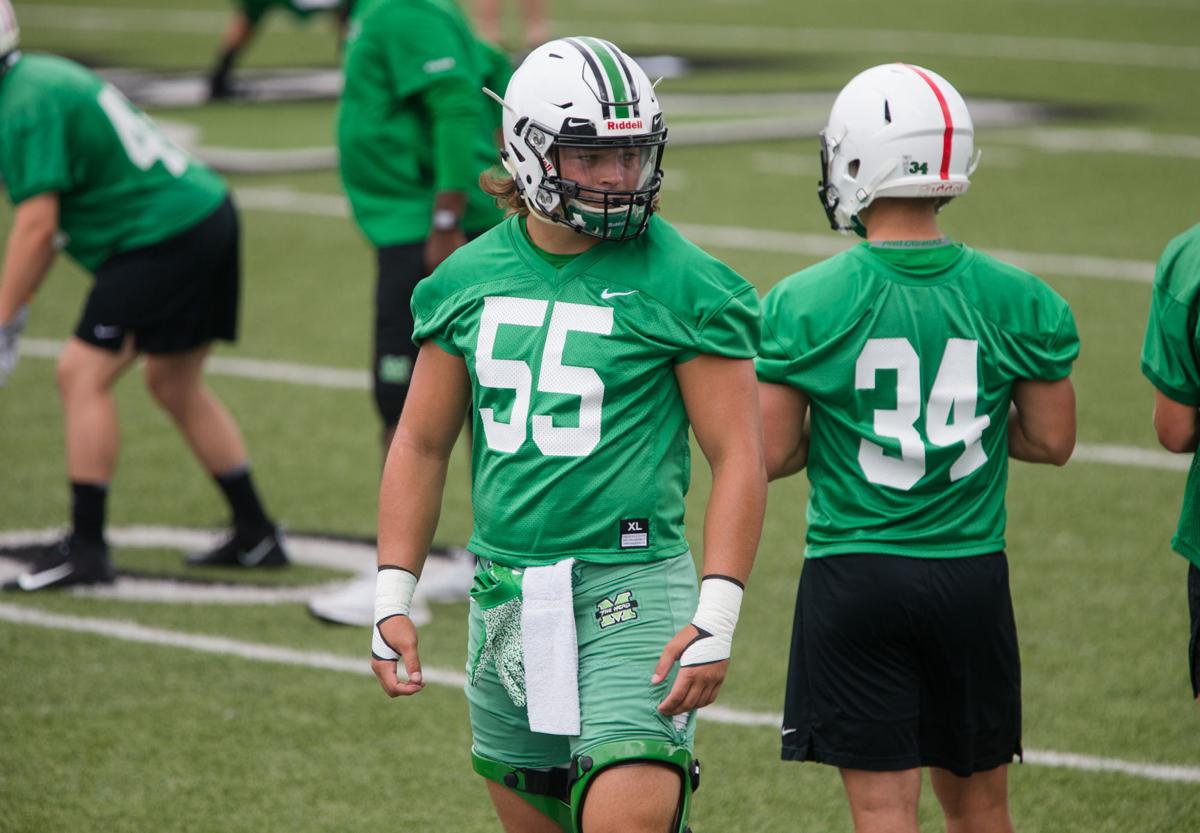 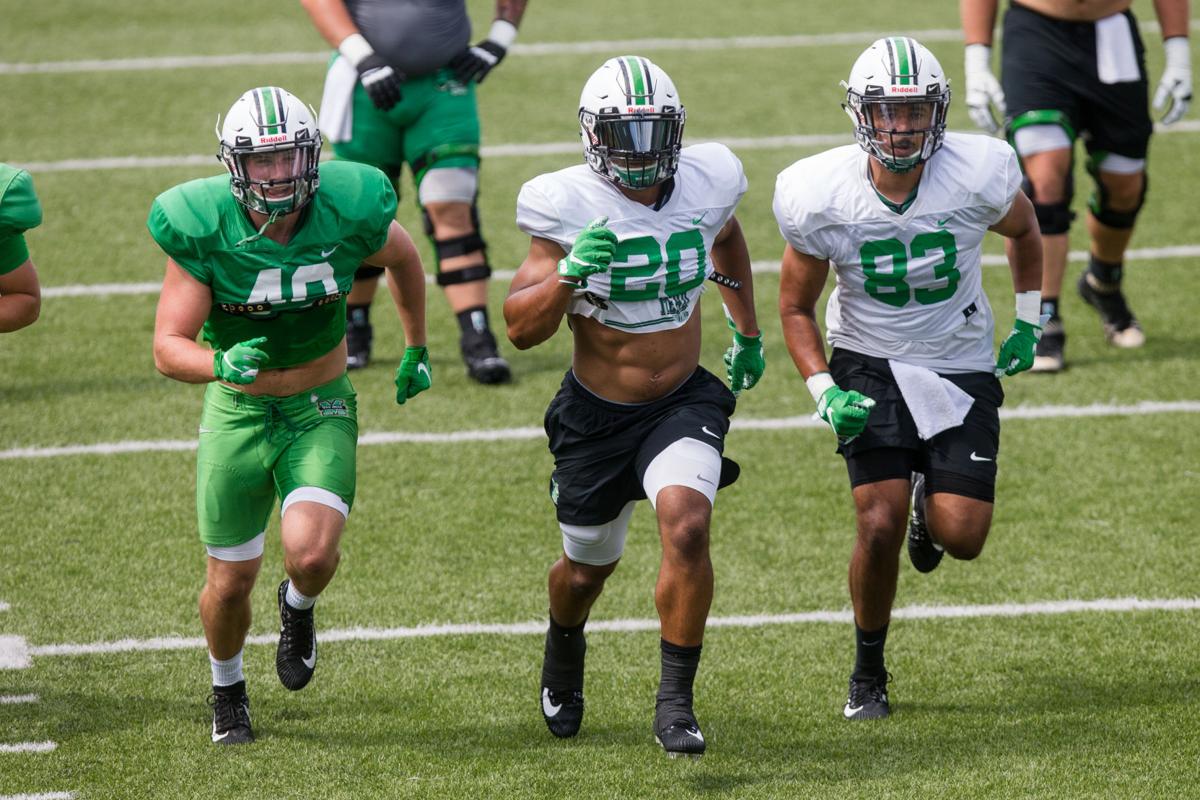 Marshall’s Domenick Murphy (40, Brenden Knox (20), and Devin Miller (83) sprint through a drill as Herd football practices for the upcoming season on Monday, Aug. 3 at Joan C. Edwards Stadium in Huntington.

Marshall’s Domenick Murphy (40, Brenden Knox (20), and Devin Miller (83) sprint through a drill as Herd football practices for the upcoming season on Monday, Aug. 3 at Joan C. Edwards Stadium in Huntington.

HUNTINGTON — Marshall coach Doc Holliday is a home-grown talent in his own right, having served as an assistant at West Virginia University for many years before getting his first head coaching job in-state.

“Our West Virginia kids are doing really well,” Holliday said. “The guys we have coming here right now from West Virginia are doing extremely well for us. We’re going to have five, six, seven of them play for us here this year. We’re excited about these guys, and we’re glad to have them.”

It starts at the quarterback position where Charleston native Grant Wells was named the starter for Saturday’s season-opener against Eastern Kentucky.

His backup will be Huntington native Luke Zban, whose father Mark Zban was the last in-state quarterback to start a game for the Herd.

(NOTE: The last start by an in-state quarterback was Mark Zban in 1996 against West Virginia State when he threw three touchdown passes to Randy Moss in a 48-0 win. It was previously reported that the last time was Zban in 1995 vs. Georgia Southern.)

Wells shined at George Washington and now looks to assume the role of starter for the Herd, showcasing an athleticism and football IQ that have the coaches and his teammates buzzing in game preparation.

“You watch him throw the ball around out there and our players are excited about that,” Holliday said. “I’m excited, as a coach, to get to watch him for the first time.”

Wells and Zban are not the only contributors from in-state on the offense.

Tight end Amir Richardson is a quickly emerging prospect for the Herd since making the switch from wide receiver.

Richardson has put on nearly 20 pounds and has looked solid throughout the preseason, serving as a matchup nightmare in the passing game due to his athleticism at the tight end spot.

“He works so hard that no matter where he ended up, he was going to be a great player,” Holliday said. “He bought totally into that tight end position, he’s gained about 25 pounds and he’s going to be special at that position.”

On the defensive side of the football, there are a pair of playmaking Charleston natives on the back end with former WVU safety Derrek Pitts getting in extended work and freshman Kerion Martin also making a quick impact.

“Kerion Martin is going to play for us this year as a true freshman,” Holliday said. “He’s done a great job, and he’s a natural football player. Pitts has always had great talent, but now he’s taking that potential and turning it into great production, just by the way he’s going to work every day.”

Spring Valley’s Owen Porter is another player who is looking to be firmly entrenched in the rotation along Marshall’s defensive line.

After serving as a linebacker for the Timberwolves, Porter came to Marshall and bulked up to become a force off the edge. Now, he joins a defensive line group that has plenty of athleticism to go with his nastiness and ball-hawking ability.

“He loves to play, and what a tough kid he is,” Holliday said. “He’s exactly what you want out of your defensive players. He plays awful hard, and you know every time he steps on the field he’s going to go as hard as can go.”

Linebacker Domenick Murphy, who is from Weirton, is also going to be in the mix at the second level, thanks to his steady play which earned him a scholarship after joining the program as a walk-on.