The West Virginia Thunder 2026 team, made up of fifth-graders from in and around the Tri-State area, won the 2019 AAU basketball Division 1 national championship, held in Gatlinburg, Tenn. 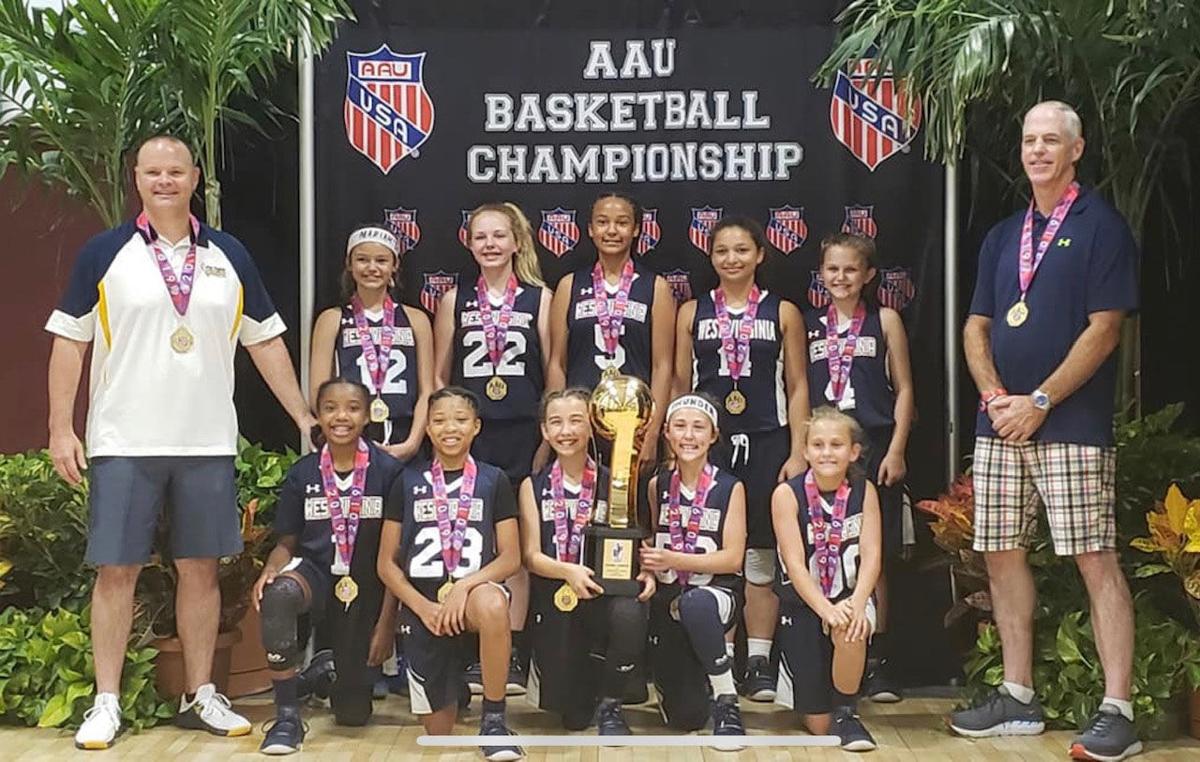 The West Virginia Thunder 2027 team, made up of fourth-graders from in and around the Tri-State area, won the 2019 AAU basketball Division 1 national championship, held in Orlando, Fla. 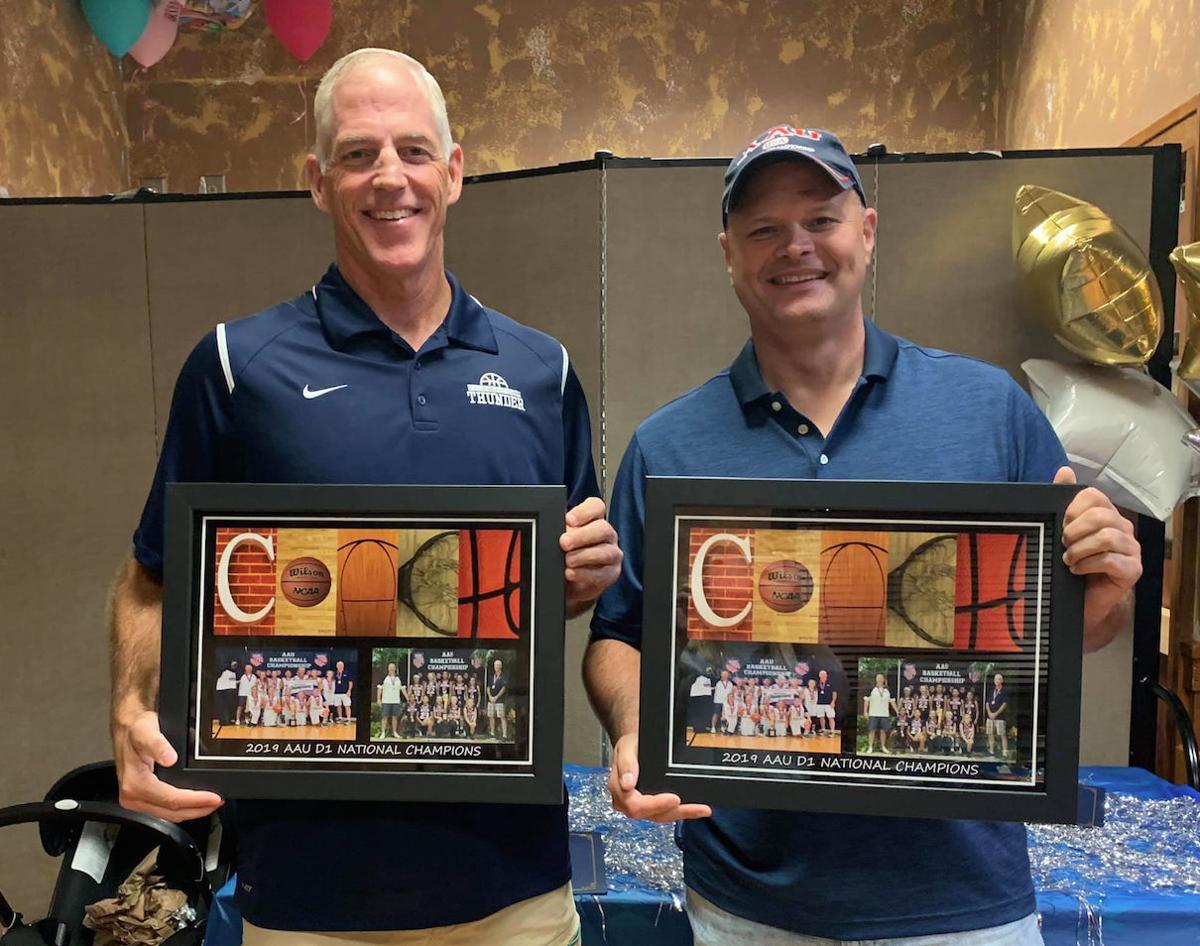 The West Virginia Thunder 2026 team, made up of fifth-graders from in and around the Tri-State area, won the 2019 AAU basketball Division 1 national championship, held in Gatlinburg, Tenn.

The West Virginia Thunder 2027 team, made up of fourth-graders from in and around the Tri-State area, won the 2019 AAU basketball Division 1 national championship, held in Orlando, Fla.

Two of those titles came last month. The Thunder 2026, made up of fifth-graders, and Thunder 2027, featuring fourth-graders, were crowned after taking tournaments in Gatlinburg, Tennessee, and Orlando, Florida, respectively.

Chris Staten, of Rome Township, Ohio, and Bruce Morris, of Huntington, coached both squads, joining Shannon Lewis, who has won five national titles, and the late Larry Lambert, who won one, in bringing home national trophies.

"It's amazing to think about because we don't have a lot of kids to choose from around here," Staten said. "We play teams from Atlanta and Chicago and places that have millions of people."

How did the Thunder roll by such larger programs?

"It's a credit to Chris and the kids," said Morris, a former Marshall University basketball player and current college basketball official. "Chris put the kids in a position to achieve great things."

Staten said Morris was being modest about his contribution, but also credited the players.

"Player development and skills development are high priorities in our program," Staten said. "We have high-IQ kids who can shoot. When you have kids who buy into teamwork and sacrifice, it's great to see them get rewarded for that."

That's not to say the Thunder is without talent. The program has produced scores of college players in 28 years. Several more likely will come from these two teams.

Staten coached the 2027 team as second-graders and didn't win a game. That's because none were played.

We practiced the entire summer," Staten said. "We worked on skill development. The 2026s, they played two or three games."

What an astonishing difference three years has made. The 2026 team went 50-3 this summer and one of those losses was to a boys team in a tournament in Beckley, West Virginia. The other two were to the Tennessee Chosen Few, which went 2-1 against the Thunder before the national tournament. The Thunder drew the Chosen Few in the opening round of pool play.

"I thought, 'You have to be kidding me,'" Staten said. "There are 30 teams here and we get the team that beat us twice?"

The Thunder went to work, studying film and breaking down every aspect of the Chosen Few's game. Staten and Morris convinced their players the team could beat the Tennessee squad. The Thunder did just that, 29-20.

Next came a 30-13 victory over the Florida Lady Huskers, who had finished fourth in the country a year earlier.

The Thunder finished pool play with a 35-18 thrashing of the Georgia Essence Extreme to earn a bye in the first round of bracket play.

The Thunder defeated the Tennessee Flight 49-29 to advance to the Elite Eight, where it beat the Arkansas Flight 40-17.

In the Final Four, Thunder 2026 rallied from a halftime deficit to beat the Florida Lady Huskers again, 38-28. In the finals, the Thunder defeated Nike Cy Fair of Texas 40-32.

The 2027 squad wasn't to be outdone. The Thunder edged the Atlanta Select Black Diamonds 38-35 in overtime to begin pool play, then clobbered the Louisiana Lady Hornets 40-4, the Oklahoma DC Queens 33-22 and IGB Indiana 41-29.

Thunder 2027 earned a first-round bye in bracket play before pounding the Greenville (South Carolina) Lady Lynx 43-9 and the Northern Kentucky Tar Heels 39-20 to reach the Final Four. They knocked off the Cincinnati Lady Future 43-32, then won the championship with a 39-24 triumph over the Michigan Headlines.